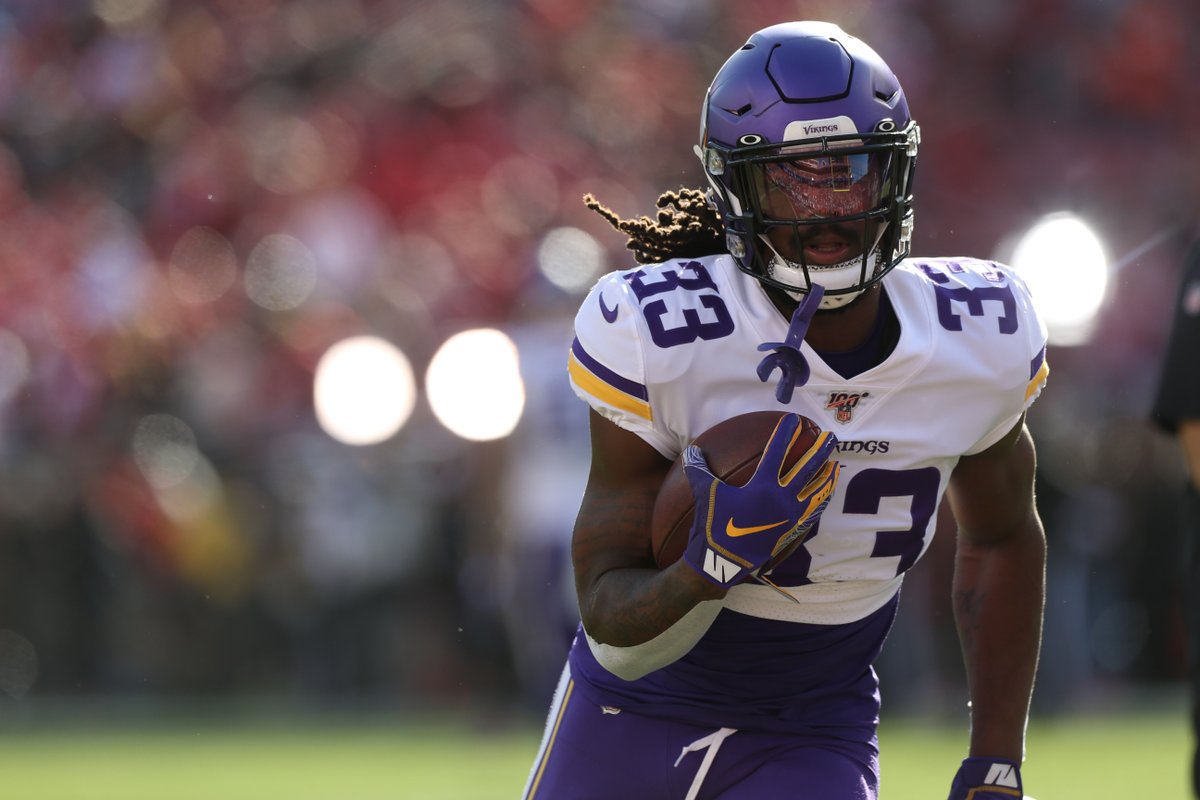 Live on in our recommended Sportsbooks are NFL player props for the upcoming regular season is a list of rushing yard totals for a group of 16 players. Fourteen running backs and two quarterbacks make up the menu of 10 cent betting options: Here then are our handicapping predictions for the 2020 NFL Rushing Yards Totals Player Props.

Cook didn’t manage to get through the entire 2019 season unscathed but it was still his most complete campaign since being drafted in 2017.

In 14 games he ran the ball 250 times for 1135 yards, as well as doing big damage as a receiver out of the backfield.

But the Vikings also saw their backups Alexander Mattison and Josh Boone produce in Cook’s absence. Even upon returning, Cook split time with the two.

That may spill over into 2020. It would certainly benefit the Vikings, who would love to cut Cook’s workload to keep him as fresh as possible. He’ll rack up total yards but the rushing total feels a tad high for me to feel comfortable he goes over.

McCaffrey added to his fantasy football legend in 2019 with one of the greatest seasons ever: nearly 1400 yards on the ground and 15 TDs to go along with 116 catches for over 1000 yards and another five scores.

He hasn’t missed a game in three years since going pro but the Panthers are in a notable transition period. They have relatively new ownership, a brand new head coach and a new quarterback leading the huddle.

The one rock is McCaffrey, who is as hard to bet against as anyone, it would seem. So I’m over on this one.

Drake landed in the desert after a midseason trade with Miami and he immediately took off. Initially sharing time with David Johnson, he commanded the ball and eventually led to Johnson’s departure. He enters the 2020 season as the unquestioned starter.

In eight games as a Cardinal, Drake averaged over 80 yards per game on 5.2 yards per carry. Those kind of numbers extrapolated over 16 games would have him somewhere around 1200-1300 yards.

Everybody should be more comfortable on the offensive side of the ball with Head Coach Kliff Kingsbury and quarterback Kyler Murray both in their second seasons. The Cardinals also added a dynamic playmaker outsider in DeAndre Hopkins.

Hopkins will command his fair share of targets, yes, but he will open things up for everybody else. Book Drake’s first career 1000-yard season with the over here.

The first quarterback on the list and reigning MVP comes in just under 1000 yards and will be certain to attract some of the most action of all the listed individuals.

He ran for 1200 yards and a league-leading 6.7 yards per carry as his first season as the starter in 2019. The question now becomes, how will the league respond?

It is safe to say it was not ready for Jackson a season ago but there will be new and inventive game plans to stop him in 2020.

Still, you can’t teach speed, nor can you teach the elusiveness Jackson possesses. It isn’t as if he won’t get the opportunities with the ball in his hands. Even as a starter for just half the season in 2018, he ran the ball nearly 150 times. With another 150-200 carries in 2019, he should have little problem cracking 1000 yards.