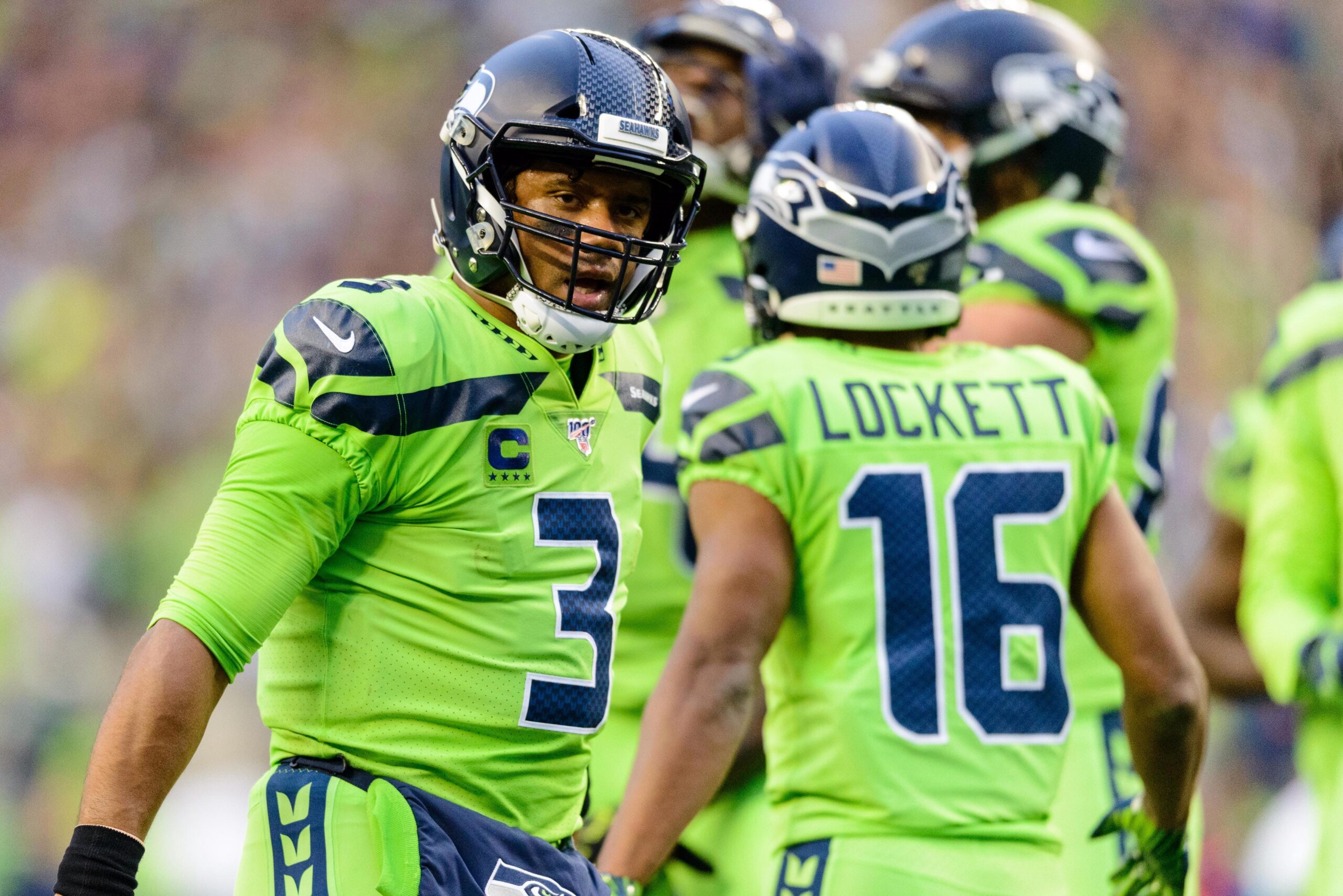 Ready to check out our 2020 Seattle Seahawks Win Total Predictions? The Seahawks had a very good 2019 season. Russell Wilson had another MVP-type year (4110 yards, 31 TDs, 5 INTs), they had the fourth-most rushing yards per game, and they were one win away from the 1-seed in the playoffs.

Alas, their defense was awful and Wilson could not drag them past Green Bay in the divisional round. But an 11-5 season is nothing to be ashamed of, and there is still reason for hope entering 2020.

Let’s look at the Seahawks offseason and their outlook for 2020.

While Greg Olson and Phillip Dorsett are not top-tier offensive weapons, they will definitely provide value to Wilson in the upcoming season. Besides, the Seahawks are still loaded with skill position players, and the additions are not unwelcome.

Greg Olson might be old, but it would be unwise to underrate him. He’s only three years removed from three straight 1000 yard seasons, and caught 52 passes for 600 yards in 2019.

The Seahawks are also bringing back DE Bruce Irvin, who has played for five different teams since his days with the Legion of Boom. Irvin has not put up excellent numbers since his departure, but his efforts last year with Carolina are comparable to what he provided in Seattle six years ago.

Lucky for Seattle, none of those are big-time names. DL Quinton Jefferson and LT George Fant are the two Seattle will miss the most. Fant started every game last season, while Jefferson recorded 26 tackles, 10 QB hits and a fumble recovery.

It’s wicked important to note, however, that this list does not include both Jadeveon Clowney and Josh Gordon. Both of those guys will most likely not be in a Seahawk uniform this September.

Overall, I would say the Seahawks held serve for the 2020 offseason.

Outside of Clowney, they didn’t lose any major contributor on either side of the football. They brought back guys like TEs Jacob Hollister and Luke Wilson, WR David Moore, and others still under contract.

Additionally, modest roster improvements like Olson, Dorsett, etc. is not something to undervalue. I’m sure Coach Carroll is ecstatic for the upcoming season.

The Seahawks defense is a problem.

In 2019, the Seahawks finished 26th in yards allowed and 22nd in points allowed while ranking 18th in defensive DVOA. Plus, the departure of Clowney does not bode well for a squad that already isn’t very good.

However, Seattle is elite in the two most important positions in football: Quarterback and Head Coach.

If necessary, Russell Wilson will drag this team to nine wins. However, he won’t have to, because most of his offensive weapons are returning to the Pacific Northwest. For example: Tyler Lockett and DK Metcalf, who combined for 1957 yards and 15 touchdowns last season.

Of high importance: The RB duo of Chris Carson and Rashaad Penny, who were both hurt at the end of last season, will hopefully be fully healthy for 2020. This is the duo that ravaged the league in rushing yards in 2019, combining for 1500 yards on 5 yards/carry while adding 10 touchdowns.

In conclusion, the Seahawks defense will be bad. BUT, their offense will be one of the most dangerous in the league. Furthermore, without many key departures on either side of the football, I wouldn’t expect this team to lose three more games than they did last year.

2020 Seattle Seahawks Predictions: OVER 9 WINS (Bet Now at any of our reviewed NFL Sportsbooks!)

What do you think of our 2020 Seattle Seahawks predictions? Comments are welcome below.