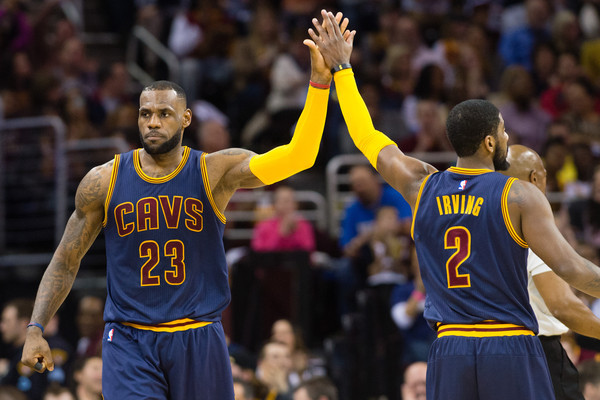 48: The number of points the Warriors outscored the Cavaliers combined between the first two games.

The Warriors have obliterated the Cavaliers through the first two games and will look to take an absolute commanding 3-0 lead by stealing Game 3 in Cleveland on Wednesday.

Everything that could go wrong, went wrong, for the Cleveland Cavaliers through the first two games.

Cleveland had their chance in Game 1 as they actually took the lead in Game 1 midway through the 3rd quarter. In Game 2, they led after the first and had it down to 6 in the 3rd quarter, but went ice cold the rest of the way.

Cleveland has gotten dominated in the 2nd halves of both games and now are in a must win spot.

They could be without Kevin Love here as well. Love was elbowed in the back of the head, where a foul was not called. Love went down and is now on the NBA concussion protocol. He remains questionable for Game 3.

Lebron expressed his major frustrations during the post game press conference. Right now, he’s playing out of his mind, but has not gotten any help from the supporting case.

Cleveland has failed to move the ball around and continues to play isolation basketball. That must change in Game 3 for this team to have success.

Why is that? They’re winning games by a lot without Steph Curry doing much. Curry was held down in Game 1 and then was in foul trouble all night long in Game 2, playing minimal minutes.

The rest of the Warriors are stepping up and making plays. Draymond Green was the hero in Game 2, hitting 3 point shots and causing havoc in the paint on both ends of the floor.

The Warriors saw their lead get cut to 6, but turned it up about 5 notches, hitting every shot and suffocating the Cavs defensively. This team is playing with incredible confidence right now.

Golden State has won 5 straight playoff games and their ability to score in bunches has been the biggest key. Counting a 20-2 run in Game 2, the Warriors can completely flip the script on a game in a matter of minutes. A giant run like the one in Game 2 could end up putting the Cavs hopes to rest here in Game 3.

This is certainly a must win for Cleveland anyway you look at it.

While everyone is counting them out, this series is far from over. Golden State did what they had to do by winning both games at home. Now it’s the Cavs turn to feed off the home crowd and respond.

Cleveland comes out of the gates firing, and gets themselves back into this series.

If you’re looking for more picks like this Cleveland Cavaliers vs. Golden State Warriors matchup we’ll be providing 4* free NBA predictions on the blog during the entire 2016 NBA Playoffs, and check out our Experts for guaranteed premium & free NBA playoff picks!

CappersPicks.com has NBA Odds up on a ton of futures, and you will also find DAILY NBA playoffs lines up as well.