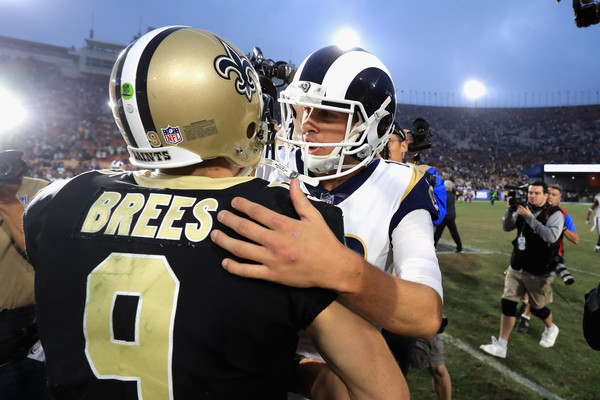 We have reached Championship weekend with four teams left competing for two spots in the Super Bowl. In this game the Los Angeles Rams make the trip to Mercedes Benz Superdome to take on the New Orleans Saints.

These two teams faced off earlier this year with the Saints coming out ahead 45-35. The home team has won the last three games played between the two teams.

Every team is trying to get the next Sean McVay for their next head coach after all the success he has seen with his first couple years with the team.

The Rams actually have the same record as the Saints but it was the loss against the Saints earlier this year that caused them to lose home field advantage.

The Rams have a lot of big name guys on the defensive side of the ball but it’s all about the offense for them to have success.

On the season the Rams are averaging 32.8 points per game and over the last few games they have found quite the one-two punch.

Everyone knows about Todd Gurley but the Rams picked up CJ Anderson just a few weeks ago and he has become quite the weapon.

Against the Cowboys Anderson ran for 123 yards and two touchdowns. In this game both Gurley and Anderson are going to have a lot of success.

On the other side of this matchup is the New Orleans Saints who got a bit of a scare from the Philadelphia Eagles in their last game but a big second half by Drew Brees and Michael Thomas was enough to get them a spot in this NFC Championship game.

Much like the Rams it’s all about the offense for the Saints. On the season they are averaging 30 points per game and have had their success in games they have run up the score.

Thomas still doesn’t get talked about as the best receiver in the NFL, but people really should start because he might be that. Against the Eagles he caught 12 passes for 171 yards and one touchdown.;

In the first game against the Rams the Saints ran up the score and it’s probably going to take the same type of effort in this game.

If they can run up the score and especially at home they really should be able to have a lot of success in this game and could see themselves in a Super Bowl.

It’s hard to beat a team twice in the seam season which is giving me a bit of pause with this game.

I think the home field advantage is going to be the difference in this game but I think the Rams will keep it close. The Saints will win the game but look for the Rams to cover the 3.5 point spread.

If you’re looking for more NFL picks like this Los Angeles Rams vs. New Orleans Saints matchup we’ll be providing 4* free NFL predictions on the blog all post-season long, and check out our Experts for guaranteed premium & free NFL Football picks!