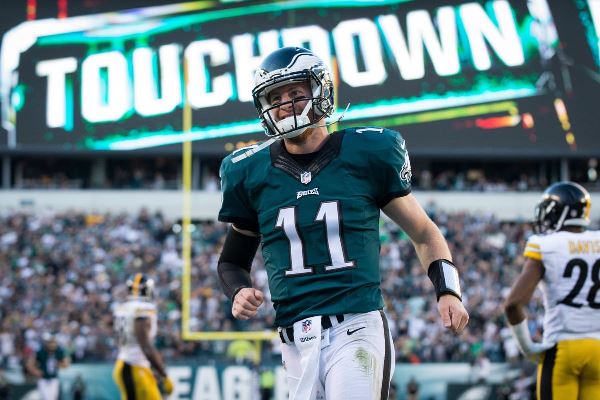 This is a very interesting contest with the Falcons favourites on the road.

Things might actually be aligning for them to return to the Super Bowl, which would make for quite the story.

Philadelphia is looking to prove that they are much more than the burgeoning Carson Wentz.

Still it is a tall order to beat an experienced group like Atlanta without your leading gunslinger.

The Falcons did not have too much trouble dispatching the Rams last week. They were a trendy underdog pick but I am not sure many were looking at an outright upset as the result.

Atlanta did not dominate the Rams but they played close to a mistake free game while the Rams had a couple of turnovers they will have to learn from.

There is no better offensive playmaker than Julio Jones. I know he can’t dominate every play but he is lethal and they are getting more and more creative in how they get him the ball.

The Falcons have the rep of a passing team but they can run it well too. They have two backs that can take it to the house on any play and they are committed to using it to slow down the game when it makes sense.

Matt Ryan has proven that he can lead his team in the playoffs and will have a big advantage over the Philly signal caller in this spot.

Atlanta did a good job last week making Jared Goff look uncomfortable and that will be the goal again this week…and with less of a running game to be concerned about.

The Falcons weren’t able to force an interception but they did sack Goff three times which is promising. The key will be to keep Nick Foles guessing. He has experience but was a backup most of the season.

The Chiefs need to get to Brady and make him feel uncomfortable in the pocket. If they can do that they will have a chance in this game, but if they let him set his feet on every throw, it could be a long night.

Don’t feel too sorry for the Eagles. Sure it sucks that they enter the playoffs without Wentz but they still have a strong defense and get a chance to force the Falcons into an outdoor game where I think there will be some weather.

Nick Foles wears the mantle of low expectations and he has proven throughout his career he can succeed under those circumstances. Throw out the final game of the season and look at his two starts and you see both the good and the bad.

Even with Wentz this team wants to run the ball. Similar to Atlanta they have a nice combo in the backfield and if they get the lead they can definitely shorten the game.

Foles or Wentz the Eagles lack that one truly dynamic receiver. Zach Ertz has emerged as an upper echelon tight end but Foles will have to spread the ball around and take what the defense gives them.

Philadelphia has thrived this season due a strong defense. They are tops in the NFL against the run and making teams one dimensional allows them to play sound defensively and not gamble too much.

The Eagles will look to shut down the running game and given Jones the attention he deserves. They are great at making teams be methodical in their approach and pouncing on mistakes. The defense will play well enough to win.

It feels funny for a Wild Card team to be the favourite against the top seed but it makes sense in this spot.

I see this one going very similar to last week. Atlanta won’t dominate but they won’t make mistakes either.

The likes of Julio Jones or Matt Ryan will eventually make a play or two that catapults the team to victory.

If you’re looking for more NFL picks like this Atlanta Falcons vs. Philadelphia Eagles matchup we’ll be providing 4* free NFL predictions on the blog all season long, and check out our Experts for guaranteed premium & free NFL Football picks!