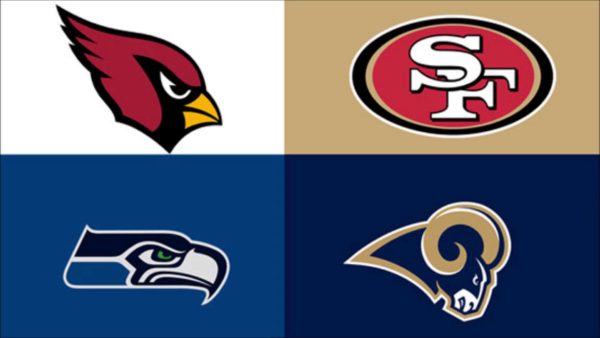 Looking for 2020 NFC West Predictions? Ready to bet on NFL Futures odds namely the NFC West teams’ lines? There may not be a better division in football between last year’s champion San Francisco, the perennial contenders in Seattle, Los Angeles still just over a year removed from a Super Bowl appearances and the upstart Cardinals. Click for updated odds on today’s games plus grab your 50% bonus up to $1000 now at MyBookie.ag.

The 49ers are the preseason favorites again but the Seahawks and Rams aren’t far behind and no division underdog has shorter odds than the Arizona Cardinals at +700.

The Rams were the best in the NFC in 2018 and the 2019 preseason but last year was a reminder of just how unpredictable the NFL can be, especially for favorites.

Jared Goff regressed in his fourth NFL season and third as the full-time starter. He attempted a league-leading 626 pass attempts but his yards per attempt dropped for the second consecutive season. He also threw ten fewer touchdowns from a season ago and four more interceptions.

By many measures, the Rams’ defense was still a top-10 unit in 2019. Aaron Donald, who came into the season the reigning two-time Defensive Player of the Year, had another 12.5 sacks but failed to win a third DPOY in a row.

Overall, LA still won nine games and it still has Goff, Donald and Head Coach Sean McVay around. That should be enough to stay in contention with an aging roster.

The 49ers swept through the first half of the 2019 regular season, finished 13–3 for their first NFC West Division title since 2012 and took it all the way to the Super Bowl, where they took a 10-point lead into the fourth quarter before being outscored 21–0 by Patrick Mahomes and the Chiefs.

Both players and personnel remain largely intact going into 2020. Jimmy Garoppolo still has three talented runners in the backfield between Raheem Mostert, Matt Breida and Tevin Coleman. His connection with second-year receiver Deebo Samuel should only improve.

Defensive Coordinator Robert Saleh remains in place, as does most of the players that made San Francisco’s defense the best in the NFC in 2019.

Pete Carroll is now the fifth-longest tenured head coach in the NFL and he retains his offensive and defensive coordinators, Brian Schottenheimer and Ken Norton.

Of course, his on-field leader remains in place. This will be Russell Wilson’s first year making the big bucks when his 4-year $140 million deal kicks in this season, making him the NFL’s highest-paid player.

In Wilson’s eight seasons as at the starting quarterback in Seattle, the team has never finished any worse than 9–7 and made the postseason seven out of eight seasons.

The Cardinals went out and got their new franchise quarterback a major weapon in DeAndre Hopkins from Houston. As a result, Murray is trending in MVP markets and has emerged as the fourth favorite, behind only Patrick Mahomes, last year’s winner Lamar Jackson and Russell Wilson.

Head Coach Kliff Kingsbury survived his first season, which is often the hardest one to get through. Now the Cardinals look to build continuity from a mildly successful 2019, based on expectations.

I am staying away from Los Angeles because of where it’s trending. That said, most bettors are staying away, which could mean the Rams are undervalued in the futures market.

I don’t think the Cardinals are ready to emerge from a division with so many proven winners.

And San Francisco is a little too rich for my blood in a division as competitive as this.

So I’ll go with Seattle at a reasonable price and with a consistent history to support it as a perennial contender out West.

What do you think about our 2020 NFC West Predictions? Please leave us a comment below telling us how you think they’ll do in the 2020-2020 NFL Season!