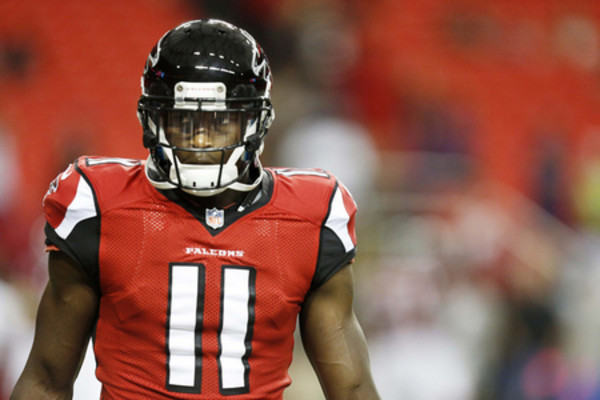 Looking for 2016 Atlanta Falcons predictions? We’ve got your back.  The Falcons begin their quest to get to the top of the NFC South mountain again in 2016 after an 8-8 record from last year gave them a little hope. We know the offense should be decent this upcoming season but where this team may fall flat is in their inability to upgrade what was a horrible defense from last season.

Will the new blood translate to a winning record in 2016 or are the Falcons poised to fall back into the basement of the NFC? Let’s take a look.

Any team with Matt Ryan, Julio Jones and Devonta Freeman is a threat – right? Well maybe not. Sure Atlanta was good at times offensively last year but they stumbled down the stretch and averaged a head-scratching 21.2 points per game last season.

Not good considering the quality of the defenses they faced.

The potential is there for an explosive year again but based on the last couple of disappointing seasons, you’d have to consider Ryan, Jones and Freeman as a sum of an average whole.

Freeman seriously wore down last season after starting the season on fire – he averaged just 3.4 YPC in the last half of the year. Freeman somehow reverted back to his rookie form in which he generated just 3.8 YPC.

Freeman will get a chance to shine again in 2016 – he has apparently worked hard in the offseason so as to not fade as he did last year.

If Freeman stumbles Tevin Coleman will be there to mop up – Coleman went for 4.5 YPC in limited action last year. Translation – the Atlanta running game SHOULD be in good shape. There is no reason this unit doesn’t finish in the top third of the league. Hopes are that the passing game can do its part in 2016.

Speaking of the passing game, Matt Ryan and Julio Jones have been and should be one of the best combos in the game – they will likely have to be extra special because of the Falcons inability to find any support outside of these two.

The team went out and signed the underwhelming Mohamed Sanu to an obnoxious contract to play on the other side of Jones – Sanu has all the makings of a huge free agent bust!

Of greater concern is the fact that the Falcons still haven’t found a quality tight end that comes close to resembling the talents of Tony Gonzalez – Austin Hooper was drafted and is pretty good, but he looks like he’s a year or two away from becoming a factor.

The running and passing games won’t mean a thing if Atlanta’s O-line doesn’t improve. That improvement could be coming in the form of former Cleveland Brown Alex Mack who is one of the best at his position despite playing on a terrible team.

He should make an immediate difference for this offense.

Mack will play alongside Andy Levitre and Chris Chester, sixth-round rookie Wes Schweitzer, Jake Matthews, chosen in the first round of the 2014 NFL Draft and right tackle Ryan Schraeder.

It looks as though the O-line will be decent in 2016 – it’s up to the playmakers to realize their potential.

To be frank, Matt Ryan needs two quality WRs and a top-tier TE to be effective and he is missing two pieces of that puzzle. I think the Atlanta offense will be OK this year – not great. That could be an issue considering that the Falcons will likely be brutal again on the other side of the ball.

Ugh! The Atlanta Falcons just can’t seem to get it right on defense! Sure the cornerback duo of Desmond Trufant and Robert Alford are good but the rest of the squad lacks to say the least.

The Falcons picked up 19 sacks in their 16 games last year – 19!!!! 2015 first round pick Vic Beasley was OK last season as was fellow rookie Adrian Clayborn but they, as leaders on the defense have to be a whole lot better than OK for this team to contend.

35-year-old Jonathan Babineaux can’t be counted on anymore, new addition Derrick Shelby is certainly not a difference maker and Grady Jarrett just can’t seem to get into the opposition backfield.

Atlanta had a chance in the draft and during the offseason to bolster an awful pass rush but failed to do so – not good.

Veteran linebackers Philip Wheeler and Sean Weatherspoon will be seriously challenged by a couple of draft picks for the starting jobs this year. Deion Jones and De’Vondre Campbell will push the underwhelming vets for sure – it could be a good thing or a very bad thing!

Brooks Reed and former Raven Courtney Upshaw are the other two starters at the position – they would be backups on most contending teams!

The Falcons lost eight of their final 11 games last season after starting the year pretty well. So which of those teams is a more accurate portrayal of what we can expect this season?

My guess is that the latter is more likely. There were some holes on this team heading into the offseason – those holes were either ignored or plugged with paper towel! I see a step backward for this franchise in 2016 as the Falcons finish 6-10 and disappoint yet again.

What do you think about our 2016 Atlanta Falcons predictions? Please leave us a comment below telling us how you think they’ll do in the 2016-2017 NFL Season!