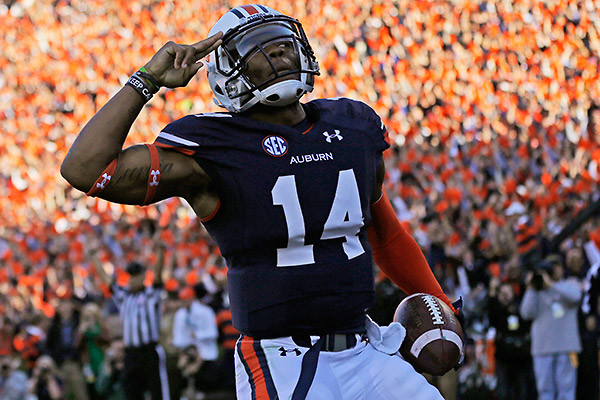 Looking for 2016 Auburn Tigers predictions? The Tigers disappointed a lot of prognosticators in 2015, when many picked them to win the conference, but they instead finished 7-6 and last in the West division. Thus, they are flying under the radar to open this season.

They may not keep pace with the Alabamas and LSUs of the world, but they should be better than expected.

Auburn should have much better production at QB this year, with the mobile John Franklin III, a Florida State transfer, likely to win the job.

There was a lot of hope for Jeremy Johnson last year (back this year as a senior) but he crashed and burned, as did Sean White.

The Tigers pick up one of the best WR prospects in the nation in Nate Craig-Myers. At 6″2, 205 lbs he should start immediately and be a task for opposing secondaries.

Also on offense, RB Jovon Robinson is reliable and OG Braden Smith is one of the best in the conference at his position.

Defensively, Auburn has lots of its characteristic speed.

Junior DE Carl Lawson is disruptive, but he’s been often injured so he needs to stay on the field. Elsewhere, DT Montravius Adams and safety Johnathan Ford will vie for all-SEC honors.

Junior kicker Daniel Carlson is one of the best in the business, as he went 23-for-27 last year, with a long of 56 yards, and was perfect on converts.

While we talk about improved QB play, it is a necessity because the quarterbacking was terrible in 2015.

It was the big reason Auburn underachieved to such an extent.

Though the offensive line has nice size as a unit, there are some new starters and some transfers that must plug in and be effective immediately – not an easy job with all the amazing defenders in the SEC.

Three of the top four LBs are gone from a year ago, so it’s a question mark on that side of the ball. T.J. Neal, a graduate transfer from Illinois, will have to step in and be a leader from the start (luckily, he’s got 244 career tackles in the Big Ten).

Franklin’s skill set under center should give Auburn more options this year, but he’s still somewhat of an unknown commodity as he didn’t get playing time at FSU.

The program is only 15-14 since getting to the National Title game in 2013. Auburn could even reach nine wins in 2016 despite having to tangle with Clemson, LSU, Ole Miss, Georgia and Alabama.

Despite the cautious optimism, this program is still a cut below the big boys in the conference.

If Franklin (or whoever starts at QB) is dramatically better than the output they had last year, the Tigers in general could also be dramatically improved.

What do you think about our 2016 Auburn Tigers predictions? Please leave us a comment below telling us how you think they’ll do in 2016!