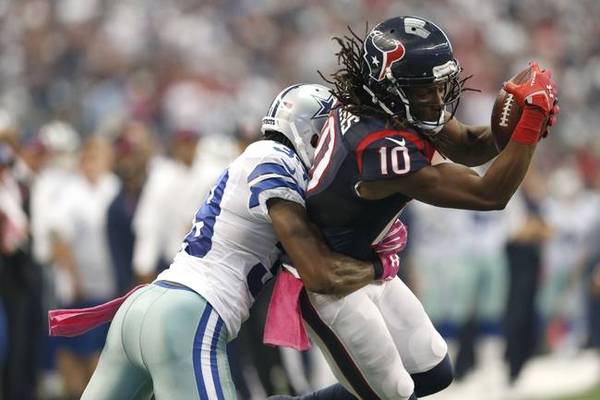 Week 12 of the Fantasy Football season kicks off early this week – three Thursday games highlight Thanksgiving Day in the United States. The Wide Receiver position will be critical as per usual in the Fantasy Football world – having a true elite guy the likes of DeAndre Hopkins and Odell Beckham is truly a luxury.

Did those two make the list of the best Wide Receiver matchups of Week 12? Let’s take a look at the top 5 Wide Receiver plays for this upcoming slate of games.

There hasn’t been a hotter pass catcher in the game recently – imagine if Hopkins had a top tier quarterback throwing him the ball! He has eclipsed 100 yards five times already this year and has nine TDs on the season.

Hopkins has scored in three straight games and should be able to add one or two more scores against the Saints horrendous defense this week. Hopkins has gone over 100 yards and scored in each game he’s played at home and is the no-duh play of the weekend. Anything less than 8-10 catches for 125 yards and a TD, maybe two would be a disappointment.

Julio has a bit of a tough matchup but should still do very mostly because of the volume of targets he gets every week. He has gone over 100 yards in each of his last three games and has six 100+ yards games on the year already. He hasn’t scored a ton – just 2 TDs in the last seven games but that absolutely HAS to change. I like Jones to go over 125 yards and to score at least once this week – nobody can slow him down.

Something about Thanksgiving Day games brings the best out in Matt Stafford and Calvin Johnson – I expect more of the same Thursday. Johnson has once again become Stafford’s go-to guy and rightfully so. He went off for 88 yards on five catches last week but looks for his first score in six weeks – strange! I think he gets it this week along with 100 yards receiving and 6-8 catches. Johnson is a matchup nightmare and should thrive against an Eagles secondary allowing the fourth-most points to receivers.

Has really picked up his game of late – he has gone over 100 yards or scored in four of the last five weeks and with Jameis Winston dialing his number early and often you have to think the uptick will continue. He is heavily targeted and may be relied upon even more against the Colts who could score some points this week. Evans has rediscovered his touch and is an automatic play in my mind. 6-8 catches for 100 yards and a TD are definitely within reach this week as the Bucs remain relevant in the NFC playoff picture.

Beckham is another guy that can absolutely be counted on for a huge week. After his bye he draws the Washington Redskins – a team that he has absolutely owned in his career. He had a bit of a down game the last time these teams played but still managed 79 yards and a TD.

Beckham has gone over 100 yards in three straight games ahead of this weekend and has 8 TDs on the season – no reason to think a drop-off is imminent. Beckham is simply one of the two or three most talented weapons in the game right now – don’t overthink this one!