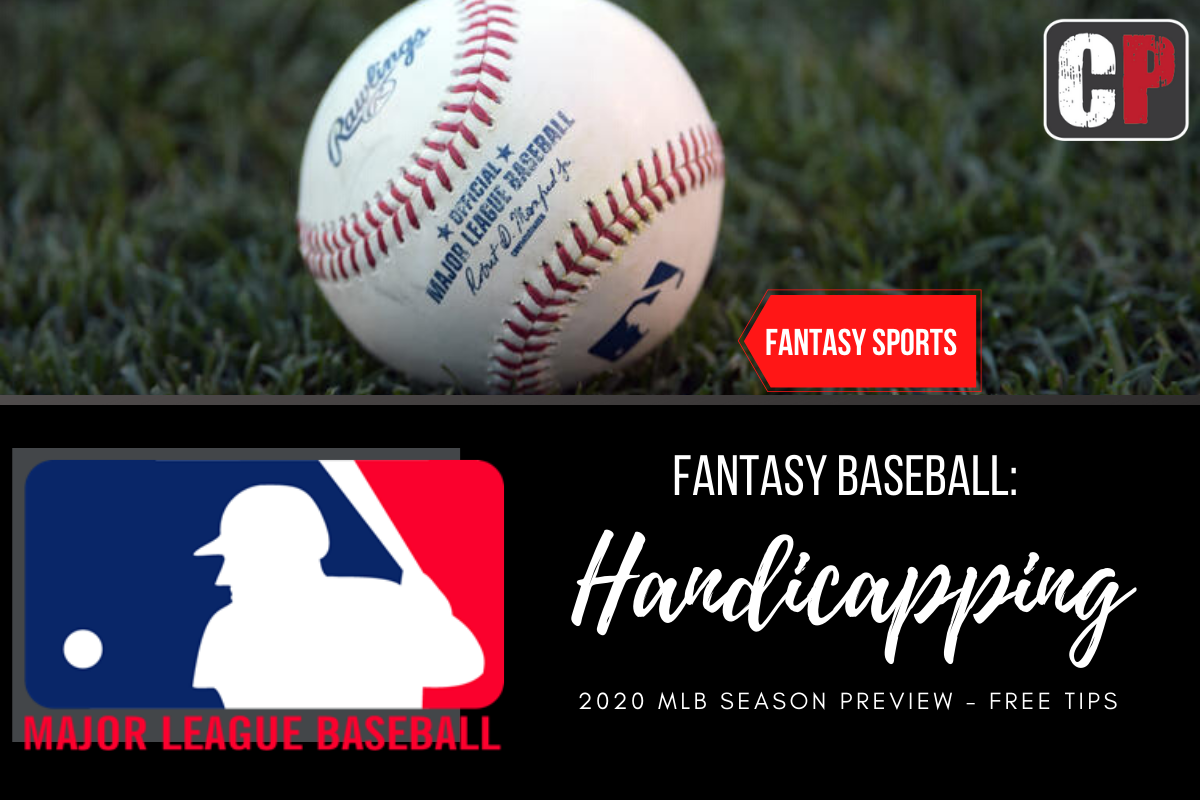 Good Day! Have you stopped by CappersPicks.com today looking for our 2020 Fantasy Baseball Preview & MLB Handicapping Tips? Look no farther! We know, like you, that fantasy baseball is as complex as ever, so we’ve put together a little pre-season primer to get you ready for 2020. (Whenever the season starts)

Luis Severino won’t pitch in 2020 and Domingo German faces an 81-game suspension for domestic violence. Jordan Montgomery and JA Happ figure to run into some wins but the guy to buy is Luis Cessa. He’ll reportedly start the season in the bullpen, which has depressed his price in markets.

He’s proven reliable and will get important innings.

The suspended start to the season has cut into Mike Tauchman’s potential playing time with Aaron Judge, Giancarlo Stanton and Aaron Hicks on the mend but he will hit right-handers at Yankee Stadium. Miguel Andujar is back in the mix but Gio Urshela is the guy to own.

His defense will assure he stays in the lineup more than markets are suggesting.

YOU CAN CLICK HERE TO CHECK OUT THE TOP 40 MLB HANDICAPPERS IN THE WORLD! (All Under 1 Roof)

It’s unlikely the Rays’ collection of catchers will yield much offensively but Mike Zunino is a bounce-back candidate, if only because his disastrous 2019. He’s regressed for two seasons in a row now but the Rays had the confidence to re-sign him for his age-29 season.

Michael Perez, a virtual unknown, may get the lion’s share of at-bats against right-handed pitchers and is worth an investment.

Tampa can stuff seven lefties into a lineup against a righty and seven righties into a lineup against a lefty so fantasy owners will have to stream just about everybody. Only Austin Meadows and Ji-Man Choi will play most every night. Of the righties, Hunter Renfroe stands to play the most, unless Yandy Diaz and/or Jose Martinez improve their defense.

Buy Manny Margot, who finally gives the Rays some quality depth behind Kevin Kiermaier in centerfield. He’ll play against lefties with potential for even more than that, if Kiermaier misses time.

Rowdy Tellez struggled in 2019, his first full season in the Major Leagues, but buy him as a power hitter on the verge of improvement. Travis Shaw may take away at-bats but his signing has also helped keep the price down on Tellez.

Boston is terribly top-heavy with Rafael Devers, Xander Bogaerts and JD Martinez, none of whom are particularly strong buys given the potential of Boston’s lineup to fall apart. Stay away from the Sox.

Victor Robles is just beginning to scratch the surface of his potential and will continue to hit for most power, unless 2020 is a temporary step backward. Buy but don’t go crazy.

Tanner Rainey may not get save opportunities with the duo of Daniel Hudson and Sean Doolittle ahead of him, plus Will Harris. Even so, he’s the one upstart guy out there with a real closer’s makeup.

The Braves cleared the way for Mike Soroka and Max Fried to be their official 1-2 punch, starting in 2020. They are both worth the high price they are going for in fantasy markets.

So is Ronald Acuna Jr., though injury concerns are real in full-season leagues. Freddie Freeman is more suited to be a big investment in such a format.

If Edwin Diaz doesn’t bounce back and Dellin Betances is healthy, a quick shift of closers would be easy in envisage in New York. JD Davis is second on the depth chart only in left field but he’s third in a bunch of other spots and is simply too valuable and dependable not to get at-bats this season.

The uncertainty of where he slots into the lineup has created a buying opportunity.

Jay Bruce will utilize that right field porch in Philadelphia when he gets the opportunity to take on right-handed pitching at home. Buy Aaron Nola as an ace because if he isn’t, Philadelphia will finish closer to Miami than whichever team ends up third in the East.

If Tim Anderson picks right back up where he did last season and this time stays healthy, he will have a monster season hitting at at the top of Chicago’s improved lineup. Aaron Bummer might be the best arm out of the bullpen and could quickly usurp Alex Colome and Steve Cishek, who are both ahead of him on the closer depth chart.

Nomar Mazara is worth a look only because this is his first opportunity outside Texas and he’ll get RBI opportunities at the bottom of that lineup.

Last season, the public was skittish about Josh Donaldson‘s durability. It doesn’t seem to be nearly as big an issue after just one full season in the National League and now he has a long way to fall in the markets it things don’t go as well in Minnesota as they did in Atlanta. Marwin Gonzalez could find his way into plenty of at-bats.

Most everybody else in Minnesota’s starting lineup is already expensive but the guy who might be worth the price is Jorge Polanco, who can do it all and might still be peaking, in terms of power.

If the Indians win this season it will be because of the pitching. Aaron Civale will be great; Zack Plesac will at least win a lot of games; Shane Bieber will be a Cy Young candidate; and Mike Clevinger will stay healthy.

Chances are better things go badly in Cleveland and there aren’t many valuable fantasy options.

Kris Bryant‘s RBI total may dip hitting leadoff but he’ll more than make up for it with more runs scored and an increase in other totals thanks to extra at-bats and a more assured approach at at the plate with Anthony Rizzo hitting behind him.

Rizzo is a safe buy in the early rounds but the Cub with greatest breakout potential is Ian Happ, who will hit “second leadoff” at the bottom of the lineup and looks to be in for a full season in the outfield.

The Pirates’ eight regulars form a respectable lineup but the lack of depth is going to hurt the left-handers, namely Brian Reynolds, Adam Frazier and Collin Moran, who will play most nights against a lefty starter.

Steven Brault won’t rack up the strikeouts but he’s apt to lead the staff in wins and will keep walks and runs to a minimum.

Eugenio Suarez won’t miss any time after having shoulder surgery in January and how can one not feel good after a fresh surgery? He’ll hit behind an improved top of the Reds’ lineup with greater protection behind him.

Eric Sogard wasn’t the impact player Tampa Bay may have anticipated when it made the deal with Toronto to bring him over before the deadline but he was dangerous as an everyday player with the Jays.

He will have a similar role with the Brewers this season and gets to hit in front of Lorenzo Cain and Christian Yelich, which is certainly an upgrade.

The Cardinals may struggle to score runs in 2020. The middle of the lineup lacks power and the end has potential to be downright bad with Dexter Fowler and Yadier Molina still in line for lost of at-bats, which really cramps Harrison Bader‘s ceiling.

Joey Gallo may look expensive. He’s not when you consider his potential to be the highest-scoring player in all of fantasy baseball. I didn’t mention him in my MVP write-up but should have because he has the talent to be the other guy, along with Aaron Judge, whom one could mention in the same sentence with Mike Trout.

Buy Gallo as the MVP, where he sells for about 75/1, and as a potential fantasy stud because his right wrist, which was all that kept him from 50 home runs a season ago after hitting 40 the previous two seasons, has completely healed.

Trout is more valuable on the bases and in the outfield but Gallo might do enough damage at the plate in 2020 to rival the best player in baseball.

Sean Manaea and Frankie Montas are both healthy and eligible to pitch again whenever the 2020 season starts and they will only grow in value as long as it remains the case.

Marcus Semien‘s price doesn’t have much more room to grow after his 2019 season. Matt Olson was pretty great last year too but buy him as someone with even more, steady growth ahead. Mark Canha too.

Liam Hendriks will be in the upper echelon of closers in the league and should have plenty of save opportunities.

Let others bid the price up on Fernando Tatis Jr in the preseason of his sophomore season. A poor start could see his price drop disproportionately; speculative stars are always more volatile in the market so better to wait for a buying dip on the Padres’ shortstop.

Tommy Pham‘s no longer an investment now that Tampa Bay has decided to cut him loose. And the Rays got a key contributor in Hunter Renfroe in return, which is just history repeating itself.

Unlike Tatis in San Diego, Ryan McMahon put a full season under his belt in 2019 after a couple partial jobs in the two years before. He hit 24 home runs but still finished well below league-average in terms of OPS because he struck out more than 100 times more than he walked. He’s 25 now and well-positioned to grow in 2020.

The Dodgers’ household names aren’t cheap in preseason markets but the guys behind them are, especially considering they are one injury away from becoming a full-time player in a star-studded lineup. So buy Matt Beaty, Kike Hernandez and even Chris Taylor.

What do you think of our 2020 Fantasy Baseball Preview ? Comments are welcome below.