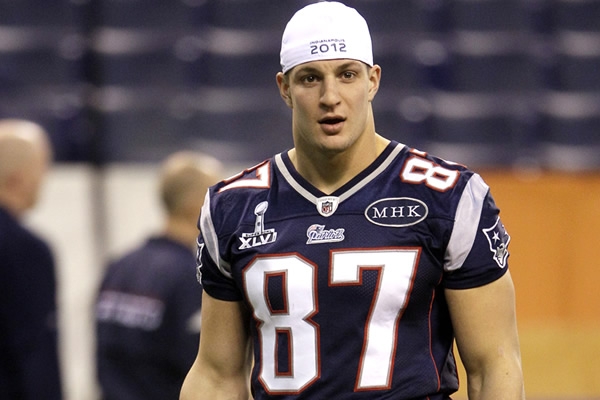 Week 12 of the Fantasy Football season is sneaking up on us – three games on Thursday kick off one of the last dates on the Fantasy Football Regular season. There is still a huge disparity between the tiers of Tight Ends as we head into the stretch drive – to own a Rob Gronkowski, a Greg Olsen or a Tyler Eifert is truly a luxury!

Which Tight Ends can we count of to get us the Fantasy “W” this week? Let’s take a look at the top Tight End plays for Week 12.

Not much of a doubt here. Gronk had a bad week against the Bills making him overdue for a statistical explosion. He had just two catches for 37 yards last week but will have to be more involved this week – especially considering the condition of the Patriots Wide Receiver corp. It’s true that he will have a difficult time this week against Denver’s top rated defense but Brady absolutely has to find Gronk or the Pats will lose any ambition of a perfect season.

5 catches for 80 yards and a TD seems about right!

Love me some Delanie Walker this week! He has become Marcus Mariota’s unquestioned #1 target and gets a crack at an Oakland defense that has allowed an astounding 10 TDs to opposing Tight Ends this year – worst in the NFL. He had eight catches for 109 yards against the Jags last week – I am expecting similar numbers to go along with a TD this week. #2 may seem a bit high but a look at his matchup says otherwise!

Olsen will likely be on this list all season long – he’s that integral to the Carolina offense. Olsen gets a Dallas defense that will be without Morris Claiborne this week which helps immensely. Simply put Olsen will get his targets in what has a chance to be a pretty high scoring game on Thanksgiving. Along with targets comes production – Olsen is one of the best at making the most of his opportunities.

He has averaged almost 80 yards per game – expect close to that Thursday – and he’s scored 4 times in his last 6 games – I like him to make it 5 of 7!

Like Olsen, Eifert has earned elite status and likely won’t be off the Top 5 list for the rest of the year. This week he draws a decent Rams defense that gave up 2 TDs to Chicago’s Zach Miller a couple of weeks ago. Crockett Gilmore also had over 100 yards receiving against the Rams. Eifert scored 2 TDs against the Cardinals and three times against the Browns in Week 9 – He IS the Red Zine target for Andy Dalton. He is tied for the league lead with 9 receiving TDs on the year – I like him to add to that total this week. 6 catches for 80 yards and a TD looks about right.

Baltimore’s pass defense is awful! Add in the fact that Josh McCown who brought Barnidge to prominence is once again the starter in Cleveland and this looks like Gary could have himself quite a game on National TV Monday night. Barnidge already totals seven scores this year and had his career best game in Baltimore when he caught eight passes for 139 yards and one touchdown.

He has been very reliable this year and has a chance to help his owners out big-time Monday. Look for 6 catches, 80 yards and a TD in a Cleveland win.