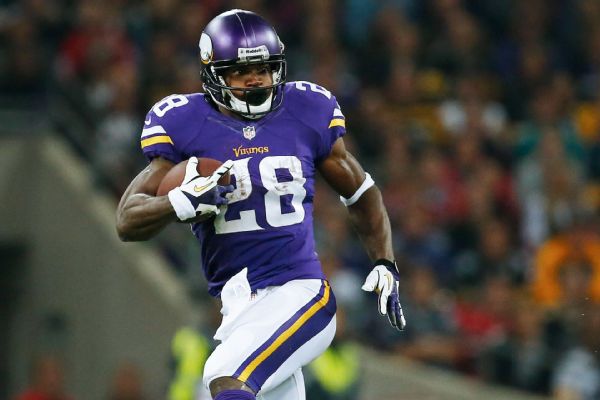 Week 12 of the NFL season is almost here – time to start shaping our rosters for the Fantasy playoffs that are just around the corner. The Running Back position was a bit of a mystery last week – the top four rushers of Week 11 were Doug Martin (235 yards), Thomas Rawls (209), Darren McFadden (129) and Ronnie Hillman (102). Where were the studs?

Which of the top tier RBs are due for a bounce back? Let’s take a look at the top 5 RB plays for Week 12.

Peterson will be after a strong bounce back after a disappointing 45 yard rushing effort against the Packers last week. Peterson gets a Falcons D that’s allowed the seventh-most points to running backs this week in what has the potential to be a Fantasy explosion. Expect the Vikings to control this game and for Peterson to get back to handling the rock 20-25 times.

125 yards and a TD on the ground to go along with 2-4 catches for 25-40 yards is a very realistic expectation for Peterson this week. The Vikings have to ride AP – their success depends on it!

Gurley and the Rams face a pretty good Bengals defense in Cincinnati this week but that doesn’t worry me – he is still in line for 20-25 touches no matter what. He has gone over 100 yards just once the last four weeks but has scored in five straight. It’s true that Gurley’s numbers have slipped as the season has gone on but based on volume alone, he has to be in the top 4.

I am expecting 80-100 yards on the ground with a TD and 3-5 catches for 25-40 yards through the air this week – with huge upside. Any time you have a home run hitter that is scheduled for a huge workload they have to be in the top 5 don’t they?

For some reason it’s kinda thin in the running back pool this week. But Murray is a terrific option especially with Ryan Matthews expected to sit out again this week with a concussion. Murray will be the workhorse back against a pretty bad Lions defense on Thanksgiving. He has ramped up as the season has gone on and is showing Eagles fans why he should be the undisputed #1 guy in Phili. He’s good for 8-100 yards on the ground with a TD and should catch 4-6 passes as well for 40-50 yards. It’s about time we saw Murray in the top 5 – my guess is that he doesn’t disappoint.

Coming off the Saints bye expect Ingram to be a key guy in the New Orleans attack on Sunday against the Houston Texans. He has been just OK this year but is the unquestioned workhorse in the Saints backfield. He should get 20-25 touches Sunday. That should lead to at least one short score. I like him to get the ball 20-25 time and for him to produce 80-100 yards and a TD to go along with 4-6 catches for another 35-50 yards – good enough for top 5 this week.

It doesn’t look like Marshawn Lynch will play Sunday which opens up Thomas Rawls to build on an incredible 209 yard, 1 TD effort last week of 30 carries last week. He also added three catches for 46 yards and a second touchdown. Rawls becomes the feature back on an offense that looks as though they are finding their stride. He has rushed for 170 yards in two of his four starts and at home against the Steelers this week should be in line for another huge game.

100 yards on the ground and a TD to go along with 2-4 catches for 25-40 yards isn’t an unreasonable expectation.