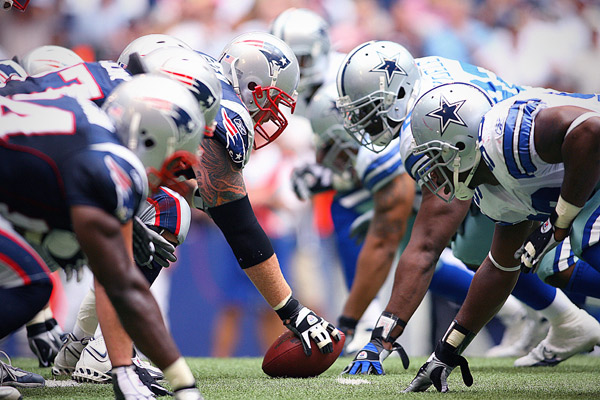 Ready to discuss Super Bowl LI futures? With Week 13 in the books and all the bye weeks having come and gone, we’ve officially reached the three-quarter mark of the NFL season. Each team has played 12 games, and we now enter the home stretch in the final four weeks of the season.

Here’s a look at where all the notable teams stand as we approach Super Bowl LI.

The Patriots are rolling right along, and the rest of the NFL is learning just how dangerous an extra-motivated Tom Brady is. The loss of Rob Gronkowski is concerning, but New England has so many weapons at wideout and running back it may not matter.

The Cowboys are re-defining the blueprint for roster construction in the NFL. Their offensive line helps them on both sides of the ball by leaving their ordinary defense on the sidelines.

That their best quarterback is on the sidelines will catch up with them eventually.

The Seahawks typically start rolling around this time of year. If you want to get behind Seattle, sooner is always better.

The Chiefs are getting healthy on defense, which is a good thing, because if they’re going anywhere that’s the side of the football that will have to be the difference-maker.

Another team breaking the roster construction mold. The Raiders have so many weapons on offense that their ordinary defense – buoyed by defensive MVP favorite Khalil Mack – hasn’t been able to slow their winning ways.

Playoff success may still be a few years away.

The Steelers may still be missing some weapons on offense, but the ones they currently have at their disposal are a treat to watch. They may still have some work to do on defense to play for a title.

The Broncos have the defense of a champion, but there’s still a lot that needs to be fixed on the offensive side of the ball to get them back to the Big Game.

Matt Ryan is playing some of the best football of his career, but it will be interesting to see if he can keep that going now that Julio Jones is battling a bout of turf toe.

The Lions have mastered the fourth quarter dramatics, but carrying that success into the postseason will be a tall order.

It’s not often you’ll find value in betting on the Packers, and this certainly isn’t one of those instances.

The Ravens seem to be the recipients of some luck they missed out on last year in what was a colossal disappointment of a season. Expect their luck to run out soon.

The Giants’ schedule is about to get a lot tougher, and while their defense is improving, Eli Manning is fading, fast.

The Bucs have quietly gotten hot. Watch out for them come playoff time. For betting purposes, the value may have left them a few weeks ago, however.

A thrashing of the Jets aside, the Colts are a very flawed team.

It’s getting tough knowing what to expect from the Redskins from week-to-week. This isn’t a team that can be counted on for playoff success.

The Titans have a terrific running game, and Marcus Mariota’s taken some big strides forward in his development, but there’s still a long way to go before the Titans are fit to compete.

Entering the season, the Texans appeared to have all the pieces in place to make a run, but it just hasn’t played out that way.

The Cardinals may be the biggest disappointment in the NFL this season, in spite of David Johnson’s best efforts.

The Fins were coming on strong before crashing down to Earth against the Ravens.

The Vikings have all the weapons on defense to compete for a title, but the offense isn’t up to snuff.