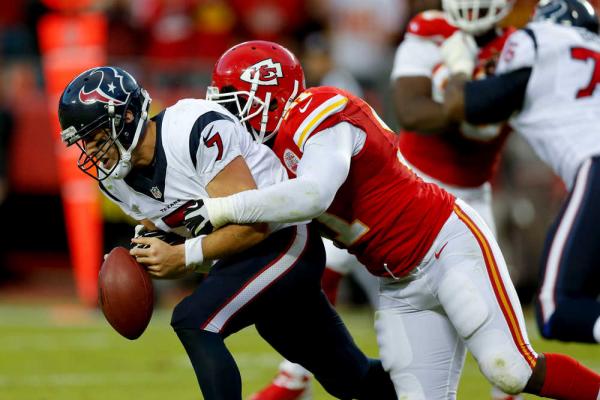 A battle between two hot AFC teams opens this year’s NFL postseason as the 11-5 Kansas City Chiefs travel to Houston to take on the Houston Texans, winners of the AFC South and the conference’s No. 4 seed.

Kick off is set for 4:35 PM ET as Alex Smith and the red-hot Chiefs look for their 11th-straight win of the year. J.J. Watt and the Houston Texans will try their
best to stymie the Chiefs, but it won’t be an easy task since Kansas City hasn’t lost since Oct. 18.

There is no hotter team heading into the postseason than the Kansas City Chiefs, who come into their wildcard matchup against the  Texans with a 10-game winning streak.

The Chiefs have been able to do it all since they lost their star running back Jamaal Charles in Week 5.

They finished the season 6th in rushing and 9th in points, and that’s just on offense. Jeremy Maclin was an excellent addition to the Kansas City receiving corps, finishing the year with nearly 1,100 yards and eight touchdowns.

When it comes to defense, Kansas City’s unit has been one of the most feared in the league, even without Pro Bowl linebacker Justin Houston in the lineup. The Chiefs rank 9th against the pass, 8th against the rush, 3rd in points allowed, and 2nd in third-down percentage.

The Chiefs allowed less than 12 points per game over their last four games of the season, and they come into this game with the NFL’s second-longest winning streak of the year.

At 9-7, the Houston Texans managed to salvage the awful AFC South division, but their play over the last two months was pretty impressive.

It was Houston’s defense, which severely under performed during the first half of the year that saved the Texans’ season, allowing just 22 points over their last three games, equating to less than 8 points per game.

Even with a mediocre offense, the Texans found a way to win games with Brian Hoyer under center and a group of no-name running backs in the backfield.

Then there’s DeAndre Hopkins, who finished 2015 with one of the greatest seasons in team history with 1,521 yards and 11 touchdowns.

The Texans are clicking at the right time, and they’re hoping to get revenge on the same Kansas City team that beat them 27-20 in Houston in Week 1.

The Kansas City Chiefs come into this game as the hottest team in the NFL, but they struggled in their last two games against the Browns and Raiders respectively.

The Texans have quietly strung together a slew of superior defensive performances and have outscored their last three opponents 80-22.

The Texans win a hard-fought battle against the red-hot Chiefs to move to the AFC Divisional Round.