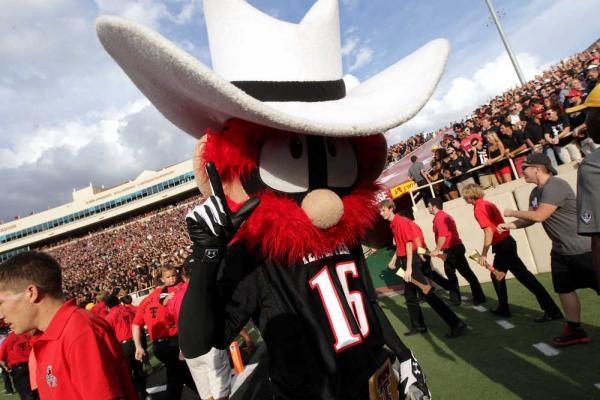 Looking for 2016 Texas Tech Red Raiders predictions? Raiders head coach Kliff Kingsbury, though a decorated former player for Tech, has had a bit of a rollercoaster performance in his first three seasons with the job in Lubbock. After a 4-8 2014 campaign, Kingsbury and Tech rebounded to manage a winning record last year (7-6).

To make a bowl this season, Texas Tech must rely on a familiar formula – scoring many points while getting scored on.

Kingsbury, the beloved former QB in Lubbock, will love his passing unit this season. The Raiders have an elite signal-caller in junior Patrick Mahomes.

The veteran (he’s started since he replaced an injured Davis Webb in his freshman year of 2014) put up over 5,000 total yards and 46 total TDs last season, despite being hampered with injury.

He is a classic dual threat pivot.

Not only that, but Texas Tech has probably the best WR corps in the Big 12 Conference.

Every important component other than leading receiver Jakeem Grant returns from last year.

Devin Lauderdale, Reginald Davis and Ian Sadler are a dangerous arsenal at Mahomes’ disposal. Starting RB Justin Stockton averaged six yards per carry in limited action in ’15 and he should benefit from the focus opposing defenses will apply to the aerial attack.

The Red Raiders also feature the best kicker in the conference in sophomore Clayton Hatfield; he had a phenomenal first season in Lubbock, going 14-for-16 on his field goals with a long of 51 yards.

Basically, scoring points won’t be a problem for the Raiders.

David Gibbs took over as defensive co-ordinator in 2015, and despite an impressive resume, with stops at Houston, Minnesota, Auburn and the NFL as a DB coach, that performance is not a handbook for keeping your job very long.

To be fair, Tech’s defense returns six starters from last year, including the entire secondary.

Another intriguing player is 6″3, 325-lb DT Ondre Pipkins, who is a highly-touted senior that spent his last three years at Michigan.

Somebody needs to step up, as there is inexperience in the front seven apart from sophomore Breiden Fehoko, who started at the other tackle spot as a frosh.

The Raiders also break in a new punter, with sophomore Michael Barden. As well-heeled and effective as the offense is, the defense in Lubbock is exactly the opposite.

Finally, the Red Raiders need to be mindful that there are new faces on the offensive line, though Tech finds a way to pump out effective O-lineman, not unlike an assembly line.

Seniors Tony Morales and Baylen Brown need to set the example for the other green players in the unit.

In the off-season, as usual, Tech has recruited the heck out of QBs and receivers while sacrificing the other side of the ball.

Until the Raiders find some players that can play on “D”, Texas Tech will continue to be a one-trick pony.

Texas Tech must play some heavy hitters like TCU, Oklahoma State and Baylor on the road, not to mention the usual Texas & OU gauntlet.

I think the Raiders will contend for a bowl spot, but the lack of an effective defense will be their undoing, even with Mahomes and the prolific WRs. If Mahomes gets injured, Texas Tech is in trouble.

What do you think about our 2016 Texas Tech Red Raiders predictions? Please leave us a comment below telling us how you think they’ll do in 2016!