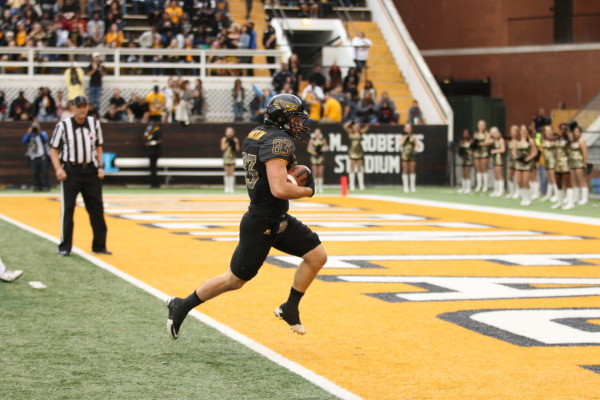 Southern Mississippi fell in last years title game to an impressive Western Kentucky team and then gave Washington all they could handle in the Heart of Dallas Bowl.

There is reason for optimism here in 2016 for this team to really do some damage.

Do the Golden Eagles get a giant advantage this season with their weak schedule.

Realistically, the Golden Eagles could be underdog in just 2 games. They’ll be slight underdogs at Kentucky to start the season and obviously at LSU.

Still, the only real for sure loss is at LSU in the middle of the season.

The Golden Eagles get Marshall and Louisiana Tech, both at home while their toughest road conference game is probably at Old Dominion.

Record Setters Are Back

Individually, Mullens attempted more passes for more yards, had more touchdowns, and had a higher passer efficiency than any other QB in the history of the program.

Two different running backs went over 1000 yards, which was also a first for the program. One of those backs returns in Ito Smith this season.

Mullens and Smith are in story for another big season as they led the team to record setting yards, points per game, and yards per play last season.

Who Will Catch A Mullens’ Pass?

Last season, Southern Mississippi knew no matter what they needed to move the chains, they were likely going to get it. Nick Mullens had two solid options out wide in Casey Martin and Mike Thomas.

Martin set a record in single season receptions with 80, while Thomas set a record for yards with 1391 and in touchdowns with 14.

The duo is now gone and Mullens really doesn’t have anybody to rely on it.

He’ll have a compliment of JUCO transfers to work with, but clearly nobody reliable. If nobody from the group steps up and help Mullens out, his passing arm is essentially useless.

Special teams was an absolute adventure when it comes to kicking and punting last season and those two parts return.

Place kicker Stephen Brauchle missed 4 PATs and whiffed on his only field goal attempt outside of 40 yards. With zero trust in him, Southern Mississippi found themselves going for it a lot on 4th downs.

With their marquee receivers gone, more will be asked of Brauchle as they’ll need him to drain some field goals with 4th downs no longer a “gimme.”

Punter Tyler Sarrazin returns and he’ll need to figure himself out too. He averaged just 34.5 yards per punt and had just one fair catch called for on 45 punt attempts.

He typically wasn’t able to switch the field and really allowed the opposing team to get a chance at running a punt back.

This could be the year for Southern Mississippi.

They have a very good shot at taking out Kentucky to start the season and should be able to handle the following 5 games up until LSU.

With not much interest in that LSU matchup, a key game comes against Marshall in their next game. As the schedule continues to work out for them, they get a bye week prior to that.

Southern Mississippi just needs receivers to step up. The talent levels on both sides of the ball are there and the favorable schedule helps out a lot.

This team should find themselves back in the title game, with some unfinished business on their minds.

What do you think about our 2016 Southern Mississippi Golden Eagles predictions? Please leave us a comment below telling us how you think they’ll do in 2016!