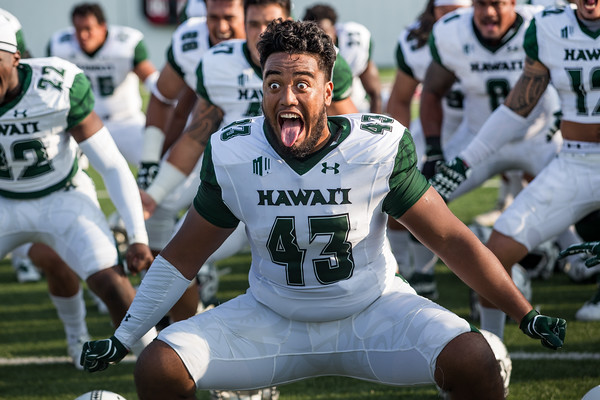 The Aztecs are favored by 7 points in this Mountain West Conference matchup and the total has been moving all week but appears at 46. In fact, the opening line was San Diego State -9 but last weekend’s loss to Fresno State showed the line setters some concerns.

Those same concerns were expressed by yours truly last weekend as we nailed the Bulldogs pick with them upsetting the Aztecs on the road. Defensive issues were where I pointed because of all of the shit up and down the Aztecs schedule this year. You are damn right their defense ranks at nearly the top of every major category because they have played arguably the weakest schedule… EVER!

That is why stats and numbers can only get you so far but I will gladly point out the rankings for you every week. They mean shit to me but if you like, then I’ll post it!

Hawaii 1 – 3 in Mountain West play and their odds of a 4th straight bowl appearance are diminishing after losing 2 of their last 3 games. Amazingly, this team beat Fresno State a month ago but they looked terrible last weekend against Utah State in a 51 – 31 thumping by the Aggies.

I warned you last week that this schedule certainly hides the issues this team has on defense and Fresno exposed it last weekend. As expected, Fresno went on to a 30 – 20 victory and that will almost certainly leave the Aztecs with no chance to appear in the MW title game. The heads-up loss to first-place Fresno means the Aztecs would need to outright win the West Division title with a tie doing nothing for them.

Fresno State jumped out to a 20 – 0 lead before the Aztecs responded, but Jack Haener actually put up some decent numbers in the loss. Haener ended the day with 306 passing yards with 1 score completing 25 of his 42 attempts on the day.

The Aztecs defense had no answer for RB Jordan Mims who broke out for 186 yards on 29 carries with two trips to the end zone. The San Diego State defense still ranks 6th in the nation stopping the run and that really didn’t help them a damn bit!

Lucas Johnson didn’t do much to support the cause either as he threw a pair of picks and only had 220 passing yards to go along with 60 rushing yards. Greg Bell led the roster with 63 rushing yards and a score while Elijah Kothe had a nice day receiving taking in 105 yards from 4 grabs.

Todd Graham got this team to a bowl game in 2020 to stretch the bowl streak to 3 seasons but his second year with the Rainbow Warriors has been up and down, to say the least.

Upsetting Fresno State should have been a launching point to propel this program to big things as it is the only blemish on the Bulldogs record this season in conference play. As it stands now, Hawaii is just outside the West Division basement ahead of UNLV but a bowl bid can still happen.

Hawaii will certainly need to run the table over the last 4 games and they may or may not be lucky to have a 13-game schedule in 2021. Obviously, a 6 – 7 record with 2 games against New Mexico State and another against Portland State would not impress any committee out there to invite them to a bowl. Last year, we finally saw Hawaii play in a bowl game outside of their state for the first time in a while.

Last weekend’s game does nothing to depict how bad the Warriors looked because the score makes it look a little better. The 51 – 31 loss was one that saw the Aggies up all game and they had Hawaii beat by halftime.

Even though the field goal by Utah State to end the half only gave the Aggies a 20 – 10 lead going to the locker room, you could see the writing on the wall towards the second half. The Aggies scored the first 21 points of the second half and defense was basically just an option for either program at that point.

Chevan Cordeiro was badly outplayed by his counterpart Logan Bonner as the Aggies QB lit up Hawaii’s defense for 361 yards with 4 TD passes to his credit. Cordeiro ended the game 23 for 39 with 3 TD passes in response but he threw a big pick and fumbled once along the way.

I even see this line down to 45.5 at some sites so someone out there expects DEFENSE? WHAT?

Are you F**king kidding me? HELLO? If you learned nothing last weekend about the shit that is the San Diego State defense then I cannot help you any further! This is a game in the 30s waiting to happen and the first one to get there wins this game. I expect the Aztecs to kick a last-second FG to walk off the field with a win so expect a tight one on the island!

Take your under trends and stick ’em where the sun doesn’t shine, baby!

If you’re looking for more picks like this San Diego State Aztecs vs. Hawaii Rainbow Warriors matchup we’ll be providing 4* free College football game predictions on the blog all season long, and check out our Experts for guaranteed premium & free CFB Football picks!