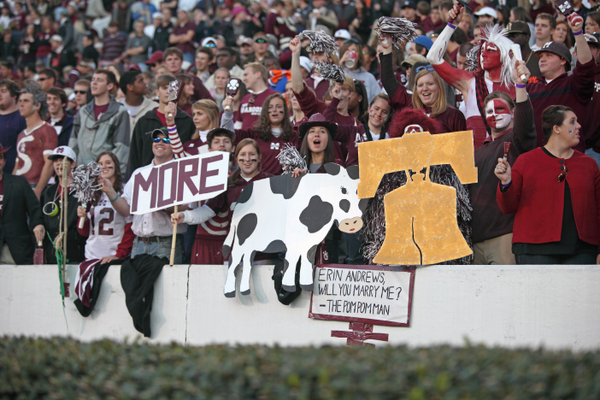 While the Egg Bowl has never had a shortness of meaning to either program, an outside shot at an SEC title game berth has one program starving for this victory.

Ole Miss would need to win at Mississippi State and have Auburn upset Alabama to win the SEC West.

On the flip side, the Bulldogs would love to ruin that opportunity for the Rebels and further strengthen their resume for a bowl game.

Chad Kelly will get his first chance in the Egg Bowl and it could potentially come with a ton on the line. Again, the Rebels will need some help from Auburn but they could have a chance to win the SEC West and take a spot in the SEC Championship.

The Rebels’ last win in Starkville was in Eli Manning’s senior season in 2003. Kelly will need to be on the top of his game in this one if the Rebels hope to escape town with a win.

The Ole Miss offense has been averaging more than 40 points per game this season.

They’ll need that type of offense to show up as they have scored just 13 points in their last two trips to Starkville.

After a streak of six straight games with an interception, Kelly has protected the football of late with zero turnovers in their last two games.

The Ole Miss defense will have their hands full against Bulldog quarterback Dak Prescott. They did a decent job on Prescott last season – holding him to 48 rushing yards on 24 attempts.

His dual threat capabilities will put this defense to the test for sure and containing Prescott could be the difference in the game.

This team lives and dies with quarterback Dak Prescott. He has 32 total touchdowns this season with just six turnovers.

He can throw and pass effectively and he protects the football. The ability and leadership of Prescott has Mississippi State in the midst of yet another impressive season.

The Bulldogs three losses have come to LSU, Alabama, and Texas A&M and those have come in Prescott’s three worst games. He had just one passing touchdown in the three games and a total of 91 rushing yards.

The Bulldog defense has been mostly impressive this season but they will be put to the test against Kelly and the Rebel high-powered offense.

Kelly has been prone to turning the ball over this season so the Bulldogs will need to turn him over and put the game in the hands of Prescott.

This rivalry is important to both programs but the Rebels could have even more on the line. An Alabama loss at Auburn would leave the Rebels needing a win over the Bulldogs to win the SEC West.

The Bulldogs would surely love to ruin that party for the Rebels.

Prescott would surely love to finish his career at Mississippi State strong and a win against Ole Miss would not only do that but it would give the Bulldogs an impressive resume for a bowl bid.

The home team has won 10 of the last 11 games in this series and that will continue this Saturday afternoon as Prescott finishes off his regular season career with a bang.

We’ll be providing 6* free College football predictions on the blog all season long, and check out our Experts for guaranteed premium & free CFB Football picks!