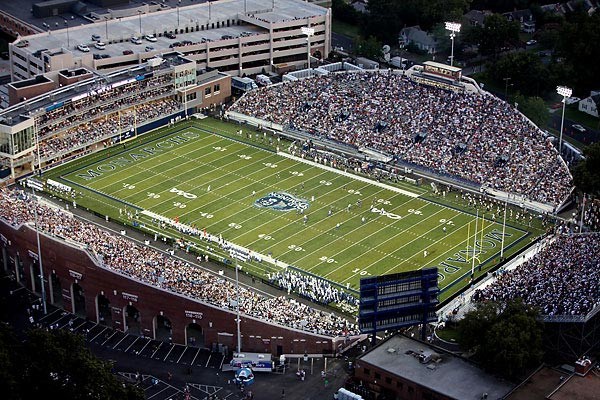 Looking for 2016 Old Dominion Monarchs predictions? “OD” had a pair of chances last season to become bowl eligible. Sitting with 5 wins, both Southern Mississippi and Florida Atlantic ruined their party, sticking them at 5 wins and pushing them out of a bowl game. The Monarchs have sat at 5-7 in back to back seasons now.

They’re on the cusp of making history and entering their first bowl game, but this is the year they need to take the next step.

Old Dominion wasn’t up there in terms of offensive production last season, but one thing that was a giant positive was their running game.

The duo that was so successful in 2015 is back here in 2016 and with the experience under their belts, who knows what these two can produce.

Junior Ray Lawry returns after putting up 1136 yards to go along with 11 touchdowns last year. He was the top freshman rusher in the conference with those 1136 yards.

However, Lawry went down late in the season and Jeremy Cox stepped in. Cox is a much more physical back that goes north to south. The two offer different styles of rushing, but their chemistry and what they have to offer really balances out.

With both getting experience in 2015, a lot better numbers could be in store for both.

The defense saw a lot of players get a lot of action last season. By doing this in 2015, the Monarchs see everyone return with that experience.

Old Dominion returns 13 players that saw time on the defensive line last season. Their top 2 sack leaders headline a group that has the potential to be very talented.

With the line having so much hype, there is reason to believe there will be more impressive defensive performances elsewhere.

They have a deep group of linebackers that is headlined by senior T.J. Ricks, who led C-USA in tackles in 2015.

Where Will the Scoring Come From?

Old Dominion had so many questions last season when it came to who was calling the shots as the starting QB. In fact, they really never even answered that question by seasons end.

They run into the same issue here prior to the 2016 season. Shuler Bentley and David Washington bounced back and forth when it came to the starting position and will do the same here to start the season.

Washington had 3 wins last year before tearing his ACL and turning over the duties to Bentley. However, back at 100%, it’s unclear who the Monarchs will go with.

Regardless of who gets the nod, both QBs need to improve on their mobility. Neither QB could really flush the pocket and continued to force their decisions.

Old Dominion will be entering their 4th season as a Division 1 program. After back to back 5-7 seasons and seeing them cough up chances at a bowl game, how much confidence does this coaching staff and returning players have.

Yes they’re hungry for some postseason play, but with a lot of question marks, especially at the QB possession, they could be bound for some regression this season.

A slow start for Old Dominion this season could really bury them and really hurt this team mentally.

The Monarchs just need to reach that 6 win plateau this season and it will be considered a giant success.

However, they still don’t match up well with some teams. Within C-USA, Marshall, WKU, and Southern Mississippi will have a field day with this Monarchs team.

With non conference games against UMass, NC State, and Appalachian State, Old Dominion almost has to steal one of those to have chance. The best chance is likely that UMass matchup as they get them at home.

When its all said and done, Old Dominion is going to struggle some this season. They’re likely looking at a 4-5 win season, which once again puts them out of a bowl game.

What do you think about our 2016 Old Dominion Monarchs predictions? Please leave us a comment below telling us how you think they’ll do in 2016!