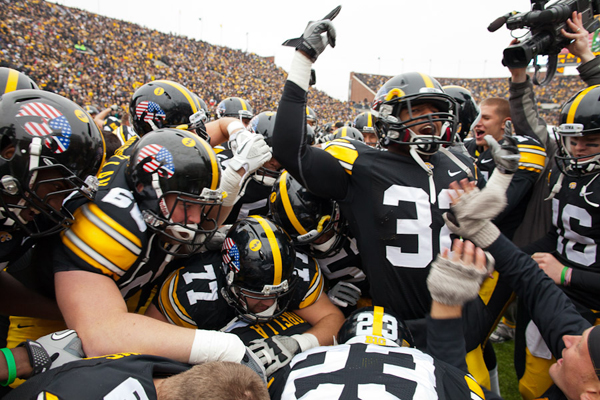 A lot is on the line when the Spartans and Hawkeyes meet in the Big 10 Championship on Saturday.

It’s very more than likely that the winner of this Big 10 Championship will have a solidified spot in the BCS Playoff.

Iowa had their first undefeated season in 93 years as they cruised to a West championship. The Spartans only loss came over a controversial call at Nebraska. With their wins over Ohio State and Penn State in the final two weeks, the Spartans found their way back into first place in the East.

Michigan State should realistically be undefeated.

Had it not been for a blown call where a Cornhuskers receiver ran out of bounds and came back in, the Spartans would be sitting at 12-0 and likely #2 or at least #3 in the country.

Still, regardless of that, a win over the Hawkeyes on Saturday should put this Spartans team in the BCS Playoff.

Senior Connor Cook returned from injury last week and took it to the Nittany Lions en route to clinching the East. On the season, Cook finished with 2730 yards and 24 touchdowns to just 4 interceptions. Cook was named the Big Ten’s top QB.

Senior Aaron Burbridge was his main target this year and was named the Big 10’s top receiver as he racked up 1158 yards on 75 receptions with 7 touchdowns. The dynamic duo led a Spartans offense that combined for 33.4 points per game.

Even though they sit undefeated, the Hawkeyes come in underdogs in their title clash with Michigan State.

The Hawkeyes have been able to do it this year with the work of Jordan Canzeri and C.J. Beathard. The star RB and QB racked up 33.7 points per game for Iowa this seaosn.

C.J. Beathard has thrown for 2354 yards this season and added 14 touchdowns to just 3 interceptions. Canzeri supplied the run game for Iowa with 964 yards on the year with 12 touchdowns.

Overshadowed by their offense at times, the Hawkeyes defense has been as equally as good this season. Iowa is allowing just 18.7 points against per game.

Everything is on the line here. Both teams are pretty identical too as they try to establish ground games, but have no problem throwing with their upperclassmen QBs. The key will be who wins in the turnover department here.

Setting up shorter fields for the offenses is a must and whoever can do that the most, will win this one.

Iowa is shockingly a more than a field goal underdog here. Establishing Canzeri early and getting him going will be huge for the Hawkeyes as they take this one outright and grab a spot in the BCS Playoff.