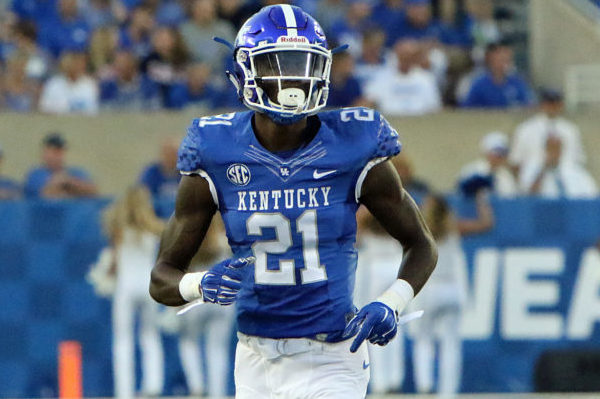 Looking for 2016 Kentucky Wildcats predictions? The Wildcats began the 2015 seasons winning four out of five games. Their only loss came to Florida at home, but they followed up that contest with a 21-13 win over then-ranked No. 25 Missouri. Not bad for a basketball school, right? Well…

Kentucky ultimately went on to lose six of its final seven games to finish the year 5-7 (2-6). This season, the Wildcats will be competing with the likes of Missouri, Vanderbilt and South Carolina to avoid the bottom of the SEC East.

Kentucky’s offense didn’t hit the stride it was supposed to in 2015, but it has something going for it this year.

It has the most returning starters of all offenses in the SEC, with nine of its 11 first-stringers back for another go-round.

Sticking with the offense, the running game should be improved this year, as the team has three capable players in the backfield. An improved passing game should also open up opportunities for this attack by committee to gain momentum early in contests.

Defensively, the secondary should anchor the point-preventing side of the ball for Kentucky.

Sophomores Christ Westry and Derrick Baity will play physical football for the Wildcats this season, which will not only give this group a nice tandem this year, but it will also show recruits from the south what playing at Kentucky can be like.

The good news is that this group has a pair of transfers coming in in Courtney Love and De’Niro Laster from Nebraska and Minnesota, respectively.

These two linebackers have a chance to complement the incumbent pieces, and the hope is that this group will overachieve based on preseason expectations to take this team to the next level (above the basement of the division, that is).

Although the passing game should be improved, that’s more of an indictment on how bad it was last year opposed to a testament to how good it will be this year.

Drew Barker could ultimately pump some life back into the quarterback position, but he’ll also have to adjust to a new system, which could take some time.

On defense, the line has a lot to prove. This group hasn’t yet established any sort of intimidation with what it’s accomplished thus far.

There’s going to be a strategy implemented by opposing offenses to attack them early and often this upcoming season.

At the top of this article, we mentioned that Kentucky was going to fall into the bottom tier of the SEC East and that it was going to be competing with three other teams to avoid the bottom of the division.

This team won’t be ultra competitive over the course of the year, but the good news is that it should do exactly what we set them out to accomplish, finishing ahead of those three programs.

Although Tennessee, Georgia and Florida are going to set the tone for the East, Kentucky should be the next in line and the one that separates the top three from the bottom three.

What do you think about our 2016 Kentucky Wildcats predictions? Please leave us a comment below telling us how you think they’ll do in 2016!