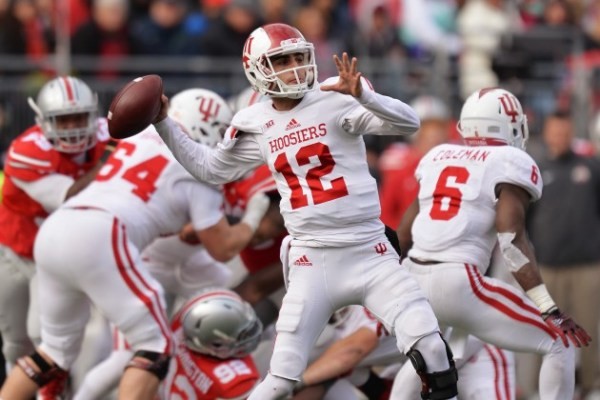 Looking for 2016 Indiana Hoosiers predictions? Forever a basketball school, the Hoosiers have been showing life on the gridiron of late, under head coach Kevin Wilson. A perennially struggling program had a white-hot offense a year ago, nearly achieved a .500 record and should find that elusive winning season in 2016.

Indiana loses some personnel this year, but there is good depth and they should once again be effective.

The wheels fell off the attack when Sudfeld was injured at times in 2015 and 170-lb (downright pencil-necked in football circles) backup Zander Diamont was forced into duty, but this year they have the junior college transfer of 6″6, 240-lb Richard Lagow, who is known for his big arm.

He should be able to distribute the ball to productive receivers, as the O-line should give him plenty of time in the pocket.

Lagow has a great trio of WRs to throw to in junior Simmie Cobbs, senior Ricky Jones and Mitchell Paige, who doubles as a great punt returner (two PR scores last year).

Coach Wilson is a former O-lineman himself, so he always demands a lot out of his front wall. The capable unit will be led by All-American OG Dan Feeney, who turned down the NFL to return to Bloomington.

Two RBs topped 1,000 yards rushing last year (one of them, junior Devine Redding, returns) so that shows you what this unit can do.

Also, junior kicker Griffin Oakes is the best at his position in the Big Ten. He shined last season and will do a great job once again.

The defense isn’t overwhelming, but there is lots of experience in the back seven.

As I hinted at above, opponents will score plenty of points on Indiana this season.

The defense loses Nick Mangieri and his 9.5 sacks, the rest of the unit is full of merely adequate athletes. Linebacker Marcus Oliver had 112 tackles in 2015 and he returns, so he should be the heart and soul of the unit.

Still, the strong skill players of the Big Ten will find the seams in this defense. Coach Wilson seems to prioritize the attack over the defending. They are also breaking in a new co-ordinator, Tom Allen, who held the position at South Florida.

The Hoosiers also need a new punter to step up; sophomore Joseph Gedeon will probably get the first look, but there are several underclassmen in the mix.

These Hoosiers are making slow yet steady progress in a conference that has some regular contenders. Last year this team took some great programs like Ohio State, Michigan, Iowa and Michigan State right down to the wire.

Indiana has some tough contests in travelling to the Buckeyes and the Wolverines, but apart from that, the schedule is navigable. This Hoosiers club is capable of achieving their first winning season since 2007.

Coach Wilson got a contract extension and a raise that nearly doubled his pay; it is well-earned.

What do you think about our 2016 Indiana Hoosiers predictions? Please leave us a comment below telling us how you think they’ll do in 2016!