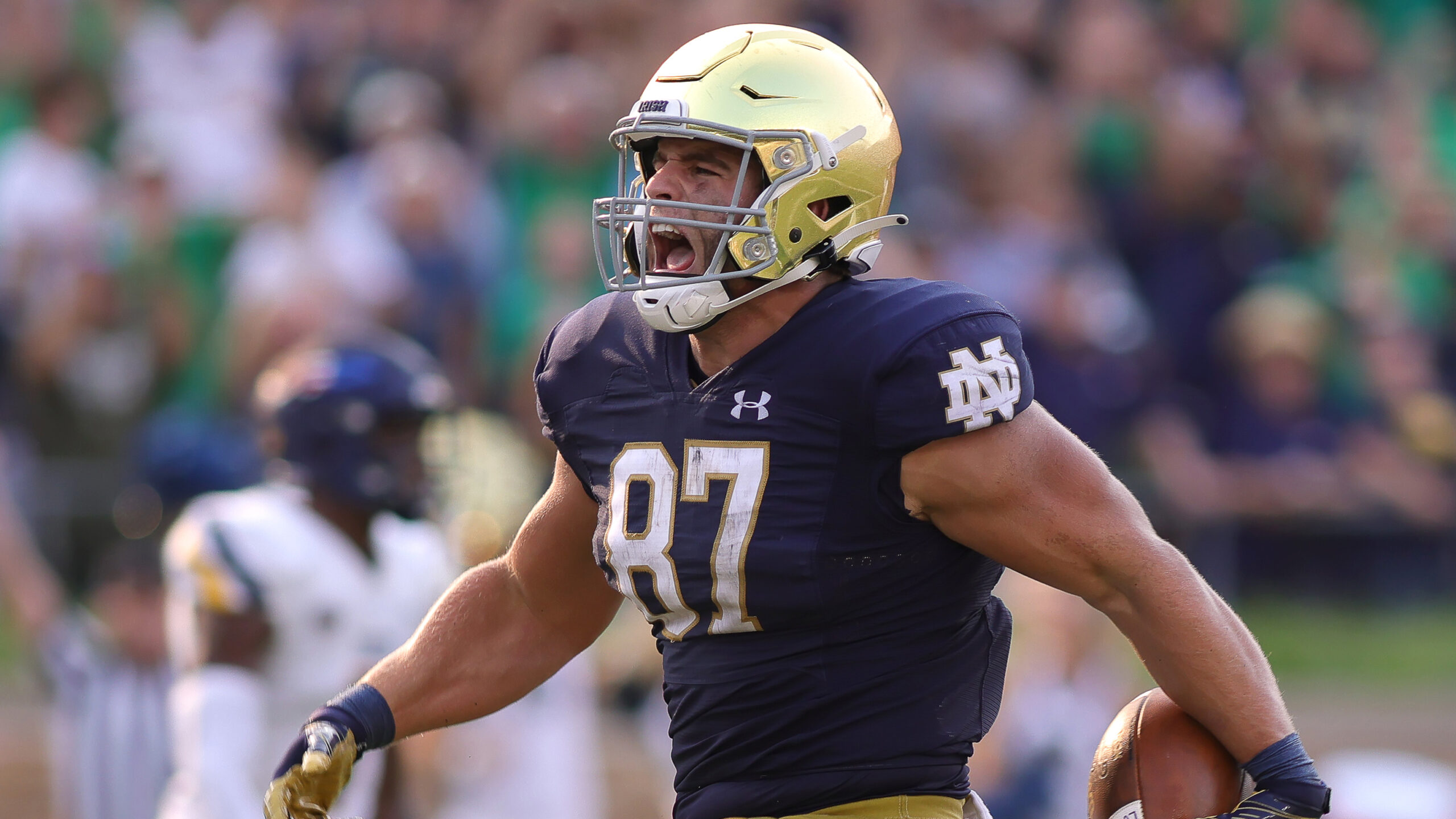 The two most prestigious Independent schools will cross paths this Saturday night on NBC, when the BYU Cougars and Notre Dame Fighting Irish face off at Allegiant Stadium in Las Vegas. Notre Dame will open as the two-point favorites here at home, with the total opening at 48.

HISTORY: BYU and Notre Dame have met sporadically over the past 30 years. Notre Dame leads the all-time series 4-2 after winning the last three meetings.

BYU opened the 2022 season with big aspirations and a pair of victories. The Cougars traveled to Tampa and dominated USF in Week 1, before earning big time win over number-nine ranked Baylor in their home opener. BYU then suffered their first loss of the season on the road versus Oregon, but they’ve bounced back by pouncing on a pair of longtime rivals.

Jaren Hall has improved shown big improvements at the quarterback position. The junior signal caller hasn’t turned the ball over since the Week 1, and he’s built for a matchup of this magnitude. He’s been flawless over the previous two games, tossing seven touchdowns against Wyoming and Utah State.

Hall threw for 1,438 passing yards with 12 touchdowns to one interception during the month of September.

Christopher Brooks has received the first crack at replacing record-breaking back Tyler Allgeier, and he delivered in Week 1, rushing for 135 yards and a touchdown in the win over USF. The Cal transfer has scored in each of the last three games, and he went for 90 yards versus Utah State. Sophomore back Mike Davis received the bulk of the work versus Wyoming, capitalizing on his opportunity and gaining 151 yards on 17 touches.

Despite the absence of Puka Nacua, their most explosive player, the Cougars found production from every in their receiver room. Keanu Hill is set to eclipse his 2021 total after a pair of big games, and he leads BYU with 329 receiving yards and four touchdowns. Kody Epps has scored in his last three games, and he paces the Cous with 21 receptions.

Notre Dame got a much-needed, statement win prior to their bye. After playing Ohio State close in Week 1, an embarrassing loss to Marshall happened in their home opener. The Fighting Irish then avoided another disaster by defeating Cal to earn their first win, but last time out they got the victory the Marcus Freeman regime needed.

In Week 4, Notre Dame defeated North Carolina in Chapel Hill, 45-32, improving to 2-2 overall and against the spread.

Drew Pyne separated himself from the pack with her outing against UNC last weekend. After a solid performance in the win over Cal, Pyne performed heroically, throwing for a career-high 289 yards and three touchdowns against the Heels.

Pyne is up to 459 passing yards with six touchdowns to one interceptions through three games.

There’s talent in the backfield with veteran Chris Tyree and Audric Estime, and they finally got things going against UNC last weekend. Estime rushed for a season-high 134 yards and he scored on the ground, while Tyree racked up 104 yards (80 rush, 24 rec) and scored on the ground.

Tight End U has another one with Michael Mayer. The junior tight end is on-pace to lead the Fighting Irish again after being one of the lone bright spots over the first two weeks. Mayer caught five passes in the opener against Ohio State, and he brought eight receptions for 103 yards in the loss to Marshall, including a 30-yard touchdown. He leads ND with 22 catches, 233 receiving yards, and three touchdowns.

This is a big time matchup that should have been agreed to played annually the second the Cougs became Independent.

BYU broke away from the Mountain West with aspirations of becoming the West Coast’s version of Notre Dame. In 11 years, they’ve broken a lot of ground as a program, and they’re respectably primed to head the Big 12 Conference because of their success.

Notre Dame comes into this one on the heels of both a bye week and a big, team building win in front of a hostile Carolina crowd. There’s optimism and confidence in the locker room now, and a win here would put the month of September behind them in full.

BYU didn’t look good on the road versus Oregon, and the crowd in South Bend Saturday night will definitely have an affect on this game. It will come down to how well the Irish can play under the lights, and we want to trust their momentum. Notre Dame can really turn the page with a big performance here, and prove who’s still the big brother among the group of solos.

Trust the luck of the Irish and the tenure of term, and take Notre Dame’s spread for this iconic battle of Independents Saturday night.

If you’re looking for more picks like this BYU Cougars vs. Notre Dame Fighting Irish matchup we’ll be providing 4* free College football game predictions on the blog all season long, and check out our Experts for guaranteed premium & free CFB Football picks!