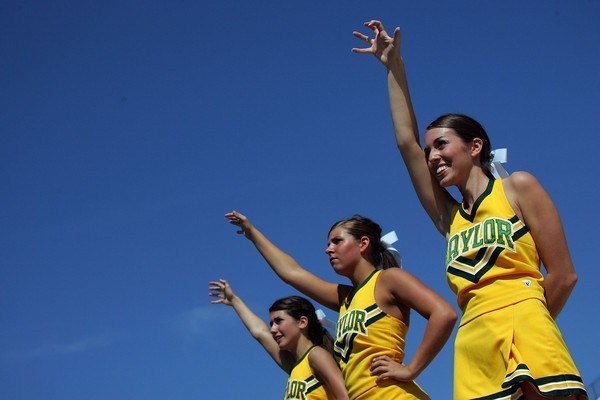 Looking for 2016 Baylor Bears predictions? The offseason for Baylor football has been an absolute rollercoaster. If this preview was written back in April, you could be putting Baylor near the top of the Big 12 looking to compete for a spot in the College Football Playoff.

Now, here rolling into August, we have absolutely no clue what to expect from this team now after transfers, loss of recruits, and the loss of Art Briles.

Coming off a season where they loss their starting quarterback to transfer, their number 1 receiver to the NFL, and their number 1 defensive player to graduation.

The season will be interesting for Baylor; they will need to get off to a hot start in order to be successful in Big 12 play.

The offense took a huge loss this offseason. They lost Jarrett Stidham to transfer as well as Corey Coleman going to the draft and being a 1st round pick.

The strength of this Baylor Bears team is the offensive backfield. The Bears return Seth Russell who was putting up video game numbers before getting a nasty neck injury that held him out for the rest of the season.

Russell threw for 2104 yards to go with 29 touchdowns and only 6 interceptions. The most eye-popping stat on his line is the 10.3 yards per attempt he had on 203 pass attempts.

Russell could lead this team to a big time season. The Bears have a pair of running backs that are returning who both ran for over 1,000 yards a piece. Shock Linwood was the feature back last season where he tallied up 1,329 yards and found the end zone 10 times last season.

Jefferson busted more of the long runs last season in less carries, he also posted 8 touchdowns. The Bears had lost Devin Chafin from last season; he posted 583 yards and 9 touchdowns.

Look for this Baylor backfield to be the most promising part of the offense.

The Baylor Bears defense was able to get pass rush for most of the season. But, the 4 starters of last year’s defensive line have now moved on.

The defensive line was led by the two end rushers. Jamal Palmer and Shawn Oakman were some scary people coming off the end. Palmer tallied 48.5 tackles to go with 14.5 tackles for loss and led the team with 5.5 sacks.

Oakman was on many radars to be picked in the 1st round of the NFL draft, but after some off field issues he went undrafted. Oakman had 37.5 tackles last season to go with 14.5 tackles for loss and 4.5 sacks.

The interior defensive line for the Bears was productive themselves.

The nose tackle Andrew Billings had 35 tackles with 14 TFL’s and 5.5 sacks last season. His partner Beau Blackshear had 20 tackles with 4 TFL’s.

The Bears only return one lineman who got significant playing time and that was K.J. Smith. Smith played in 13 games where he posted 19 tackles and 5 tackles for loss.

This defensive line unit will need to step up this upcoming season in order to be successful.

The Baylor Bears are finally turning the corner to what has been a wild offseason, and they are now able to focus on football and this upcoming season.

It is hard to predict how the departure of Art Briles is going to affect this team throughout this season.

I look for them to be out of the loop early in the season, but the weak schedule they have the first three games will help them out tremendously. Also, with conference games with Iowa State, Kansas, and Kansas State, they will have many chances to win late in the season.

In games such as West Virginia, TCU, Texas Tech, and Texas, it will come down to how fluid the team is playing late in the seasons and them staying healthy.

Looking at the schedule currently, I see Baylor going 8-4 on the regular season and being able to play in a bowl game.

I look for them to get beat by Oklahoma, Texas, and West Virginia for sure.

Then the 4th loss could come from a number of teams that was named above, they will need to show their A game for the whole season to be successful.

What do you think about our 2016 Baylor Bears predictions? Please leave us a comment below telling us how you think they’ll do in 2016!

New to Cappers Picks but not new to laying a big bet whenever he sees a matchup he loves! Nick has grown as a loyal fan to the "Factory of Sadness" in Cleveland, also a avid fan of the Buckeyes. Nick has played Fantasy Sports for 8 years now. Yes. You can call him a DFS Master! He will be giving out free money on his predictions in NFL, CFB, NBA, CBB, and MLB.