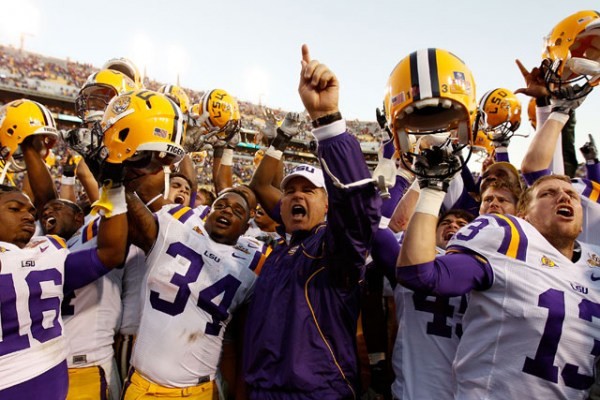 Looking for 2016 LSU Tigers predictions? The Tigers 2015 season was quite the confusing one in terms of the end of the season. Head Coach Les Miles was supposed to step down, get relived of his duties, or something along those lines. Whatever you want to call it, the Tigers regular season finale against Texas A&M was supposed to be the end of an era.

However, as the players hoisted Miles up in the air following the win, the Tigers decided to keep Miles on board.

LSU gets set for a season of high hopes.

The Tigers are one of the top favorites to win the National Title, but that clearly goes through Alabama. Do they have enough to overcome the powerful SEC?

We break it down.

Give Me The Rock

While the QB position has it’s questions, there is one thing for sure….LSU has the best back in the nation.

Heisman frontrunner Leonard Fournette returns and is poised for another big season. In 2015, Fournette finished with 1953 yards and 22 touchdowns on the ground.

His explosiveness gives this Tigers offense a chance to strike at any moment.

Harris Got His Feet Wet

There was plenty of drama last season within this LSU team on and off the field. On the field, their passing game was about as sketchy as one can get.

Ranked 105th in the nation, they relied on the run game to change games. QB Brandon Harris got plenty of big game experience last season and despite not performing all that well, he at least has the knowledge now.

Harris gets the advantage of having a solid receiving core, along with a solid offensive line that can protect him.

Fournette will open the pass game for some short, easy passes for Harris to get himself into rhythm early on in the season.

Another Year, Another New Defense

For the third time in three years, the LSU Tigers will have a new playcaller defensively.

This will be the first time under the Les Miles era that they will be working out of the 3-4. Arden Key and Lewis Neal, who are the main outside rushers on this team will be in a completely different role.

While the defense has plenty of talent, how will they adapt to the new defensive style?

They won’t get a chance to get their feet wet by any means either.

With Wisconsin to open the season, they better be ready as Wisconsin will be running the ball down their throats right from the opening kickoff.

The Tigers should have a relatively easy time through their first 7 games of the season.

Wisconsin will be a major test early on, but with Fournette in the backfield, the offense should be able to carry them through.

They endure one tough stretch this season with Ole Miss and Alabama. The good news for them? They get both at home.

The Tigers are tough team to beat, especially inside their own stadium. Look for this team to really get out of the gates early this season and dominate the SEC.

What do you think about our 2016 LSU Tigers predictions? Please leave us a comment below telling us how you think they’ll do in 2016!