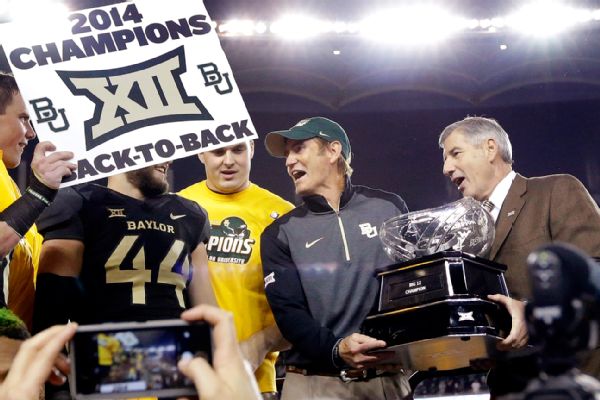 Looking for Big 12 Conference 2016 predictions? Coming into the calendar year, the Oklahoma Sooners and the Baylor Bears were the co-favorites. However, with the recent news at Waco the luster is coming off Baylor. The Bears are still an extremely talented team, but this will be a distraction that Baylor will have to deal with all year-long.

As it stands, on paper, the Sooners are the clear favorite. As a whole, this isn’t a strong conference.

The Bears and the Oklahoma State Cowboys are right there and then there is a next tier down with Texas, TCU, West Virginia, Texas Tech, and then just slightly lower is Iowa State, Kansas State, and Kansas.

The Oklahoma Sooners were a co-favorite with Baylor at the start of the year, but now the Sooners have become more of the clear favorite odds wise with all the turmoil happening at Baylor.

The Sooners bring back a lot of talent including quarterback Baker Mayfield. Halfbacks Samaje Perine and Joe Mixon will return as well and should make a major impact.

The only real minus on the offensive side is the line will be reshuffled a little bit and the Sooners lost wide receiver Sterling Shepard.

However, that should be no problem as the Sooners have plenty of wide receivers to choose from including Dede Westbrook and they have a Heisman candidate throwing them the ball.

This could potentially keep the Sooners from being the best college football team in the nation. As far as the conference is concerned, they should be fine and basically run away with the Big 12 title.

If you want to bet on a sleeper team in this conference look to Oklahoma’s in-state rival the Cowboys of Oklahoma State.

The defense, for the most part, remains unscathed. The Cowboys did lose Emmanuel Ogbah who was drafted in the second round at this year’s NFL Draft. That is a significant loss, but that’s their only one.

All in all, the Cowboys have a strong team and talent wise you could make the case that they are the second best team in the conference.

Plus, their schedule is manageable. They start their conference schedule on the road in Waco which may very well set the tone of how both teams may fare this year.

The Cowboys then get two home games against the Texas Longhorns and Iowa State Cyclones before a bye week. Then they alternate road and home games between Kansas, West Virginia, Kansas State, Texas Tech, and TCU.

Then the Cowboys get a bye week to prepare for the Sooners in Norman.

As we talked about earlier, the Baylor Bears were co-favorites with Oklahoma to win the conference. Baylor has a team that is playoff caliber.

Superstar quarterback Seth Russell should be back and healthy after his season was cut short due to a neck injury. If he stays healthy all season long Baylor will be competitive.

However, what will keep Baylor back from being a truly elite team is in the trenches. All-American left tackle Spencer Drango and three other starters on the offensive line departed.

On the defensive side, Baylor lost Shawn Oakman, Jamal Palmer, Beau Blackshear, and Andrew Billings. Tons of lost talent on that line which will not be easy to replace.

Even before Baylor got hit with all this off the field drama, Baylor was going to struggle to be a playoff team. They definitely won’t be now and they battle with the Cowboys for second place.

The last team we want to preview real quick is the TCU Horned Frogs. I feel that TCU is overvalued. The Horned Frogs have had a great two-year run, but they will be taking steps back this year.

TCU is losing a lot of talent on both sides of the ball, but mostly on the offensive side. Trevone Boykin is gone, Josh Doctson is gone, virtually the entire offensive line is gone.

TCU is losing a lot of valuable pieces and they won’t be easily replaced.

Texas A&M transfer Kenny Hill will compete for the starting job and for a couple of games there he was great and the media hyped him up given that he was an SEC quarterback, but then he proceeded to fall on his face.

We’ll see if Hill’s venture with TCU will fare better, but nothing is guaranteed as he’ll have to beat out Foster Sawyer.

The schedule isn’t exactly ideal for TCU either. The tone for the season will be set early on as Arkansas and Oklahoma come to Fort Worth. That’s two of their first five games of the year.

If TCU loses those two games, both at home, that doesn’t bode well for the Horned Frogs.

Don’t be surprised if TCU has a mediocre record with only about six or seven wins. If we break it down, TCU has a floor of five wins. I say they beat South Dakota, Iowa State, SMU, Kansas, and Kansas State.

The rest of the games are up for the debate with Arkansas, Oklahoma, and Baylor as very likely losses, and they’ll, more than likely, be underdogs against West Virginia and Oklahoma State.

It’s going to be a tough road for TCU, don’t be surprised to see them finish mid pack in the Big 12.

What do you think about our Big 12 Conference 2016 Predictions? Please leave us a comment below telling us how you think they’ll do in 2016!