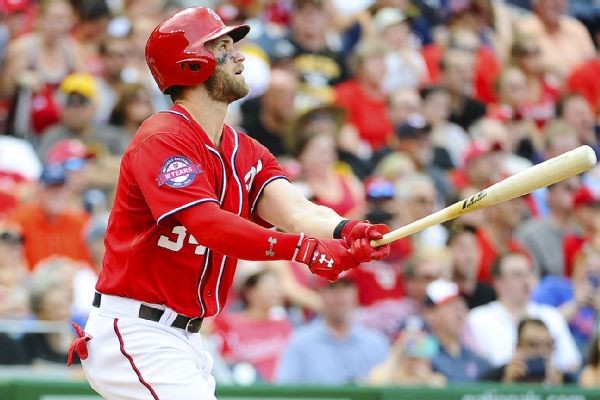 WHERE DO TEAMS STAND IN MLB?

Two more weeks have passed in Major League Baseball – the All-Star break is in the books and the second half of the season has begun. The top 3 spots in the Rankings belong to National League teams but #1 isn’t who you’d think. Yup – the Cubs drop down out of first for the first time this year?

So where does your team stand as the second half of the season kicks in? Let’s break it down in the July 18 edition of Dave B’s MLB Power Rankings.

Steven Strasburg is now 13-0 on the season, unheralded Tanner Rourke has a 2.82 ERA this year and Daniel Murphy is hitting .350!

Everything is going well for this team right now and hence their #1 spot.

The Giants could easily be in the #1 spot if they didn’t get swept by the San Diego Padres on the weekend – ouch!

They were on fire before the Break. Madison Bumgarner, Johnny Cueto and Jeff Samardzija continue to be one of/if not the best trio of starters in the game and the offense has certainly overachieved.

The Giants are legit. folks in every aspect of the game.

The Cubs looked like world beaters to start the season but have fallen off lately to say the least – just 6-15 in their last 21 games!

So why a top 3 spot? A look at the roster and a pretty nice upcoming schedule is why. I haven’t lost faith yet!

The Indians are still benefitting from a 14-2 stretch before the All-Star break but have gone just 5-5 in their last 10 overall but enter the week off a series win against Minnesota.

Cleveland is one of those teams that won’t wow you on paper but are shockingly complete and full of guys that have unexpectedly gelled in a terrific way.

The Red Sox have gone 8-2 in their last 10 games overall – on fire! The addition of the heralded Drew Pomeranz from the Padres will only make them better.

The Sox still have one of the best offenses in the game and their rotation with Pomeranz, David Price, Eduardo Rodriguez and whomever they decide is their fourth guy is pretty good indeed. Watch out for Boston the rest of the way!

The Orioles still lead the competitive AL East. They have gone 6-4 in their last 10 games and enter this week off a series win in Tampa.

The starting rotation that is 28th in the Majors with a 5.14 ERA will need an upgrade at the deadline for sure though!

The Rangers have cooled off to say the least – just 4-11 in their last 15 games overall. Yu Darvish’s return to the rotation will help a staff that has a 7.43 ERA in the month of July.

Texas was one of the best teams in the Majors the first half – expectations are that they will be active at the deadline and will be a top tier team again.

The Stros have gone 7-3 in their last 10 games and continue to play very well after a terrible start to their season. Jose Altuve continues to lead the AL in batting and Cuban star, infielder Yulieski Gurriel was added to the mix last week.

The Dodgers have been treading water since the injury to Clayton Kershaw – they are 5-5 in their last 10 games despite losing 2 of 3 against Arizona over the weekend.

Brandon McCarthey has been good and Bud Norris has held his own – could this rotation add Chris Archer?

The offense has been doing its part too – they Dodgers are averaging 4.85 runs in July.

The Jays have been playing very well of late – despite losing 2 of 3 at Oakland on the weekend they are 7-3 in their last 10.

There is a need to upgrade the pitching but the offense, especially when Jose Bautista FINALLY returns to the lineup should be just fine. Toronto looms as a dangerous team in the AL indeed.

The Mets have gone just 5-5 in their last 10 games overall but did win their series with the Phillies over the weekend.

Matt Harvey is out for the season and both Noah Syndergaard and Steven Matz have elbow issues right now.

It’s a good thing for Jacob deGrom who now has a 2.38 ERA on the year or this team would be in some trouble.

Look out for the Miami Marlins! They have gone 7-3 in their last 10 games and now sit just out of a Wild Card berth. Giancarlo Stanton has been terrific as of late hitting .333 with 5 doubles and five HRs this month while the rest of his team seems to be coming around.

The Marlins do need an upgrade in their starting rotation but if you believe the media – one is coming!

What do you think of our 2016 MLB Power Rankings + Handicapping Analysis? Comments are welcome below.