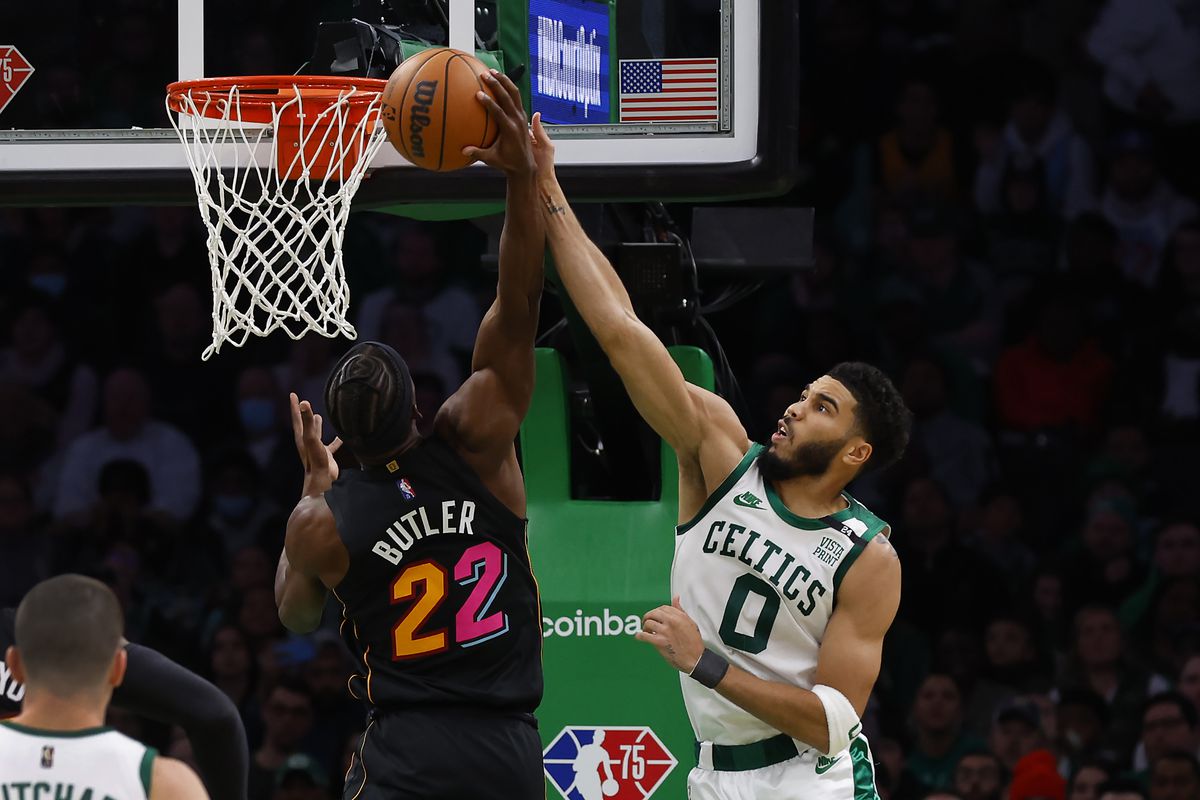 The Eastern Conference Finals shift to a new venue with the second-seeded Boston Celtics hosting the top-seeded Miami Heat for the next two matches starting on Saturday, May 21st.

Boston won the season series 2-1 and the all-time advantage having won 78 times of the club’s 129 regular-season meetings. This is the fifth occasion these clubs have met in the postseason with the Heat owning the advantage of winning three of the four prior series.

For the first time this postseason, the Heat lost on their home court. After dominating in Game 1, it was the Celtics who were the stronger, more physical team on Thursday.

Boston took an 11-point lead into the second quarter and increased it to 25 by the half. Miami fought but never truly got close to getting back in the match.

Jimmy Butler led the way again for Miami with 29 points, six rebounds, three assists, and a steal but in contrast to his 18 free throws in the opener only got to the line eight times.

The trio of Gabe Vincent (14), Victor Oladipo (14), and Tyler Herro (11) were the only other double-figure contributors.

Injuries now become the concern for the Heat who are still awaiting the return of Kyle Lowry and equally problematic was PJ Tucker had to leave Thursday with a knee injury. He’ll undergo an MRI on Friday.

Tucker (knee) and Lowry (hamstring) are both questionable for Saturday.

After missing two core contributors for Game 1, the Celtics got great news as Marcus Smart returned to the court along with the surprise of Al Horford who tested out of health and safety protocols.

Their presence made a massive difference for the Celtics as the defense functions so much better with them in the lineup. Smart specifically made a massive impact coming up one rebound shy of a triple-double with 24 points, 12 assists, and nine rebounds plus three steals and a block.

After a sub-par effort in the opener, Grant Williams was more successful in Game 2 in a reserve role scoring 19 points joining Al Horford and Payton Pritchard who each chipped in 10 points as the other double-digit contributors.

After a subpar perimeter performance in Game 1 where the Celtics shot 32.4% from deep connecting on 11 triples, the Bean Town crew was much more efficient in Game 2 hitting 20 triples shooting 50% from deep.

The Heat was slightly better on the glass (42-41) having an advantage on the offensive boards (12-8) and after trailing points in the paint scoring on Tuesday took the edge 42-30 on Thursday but with Boston hitting so many 3-point shots it wasn’t enough to be a factor.

Turnovers became a factor in Game 2 with Miami coughing the ball up 15 times leading to 20 points while Boston’s 10 miscues only translated into nine Heat points.

This series is already feeling quite similar to the semi-finals between the Bucks and Celtics but again, injuries could play a big factor. Tucker and Lowry are just as essential to the Heat as Smart and Horford are for the Celts.

For as much as both players are iron men, it’s doubtful Erik Spoelstra would gamble with having them come back earlier if an extra day of rest would get them closer to 100 percent health.

With their participation uncertain, the edge favors Boston although I think the Heat keep the score closer than six points.