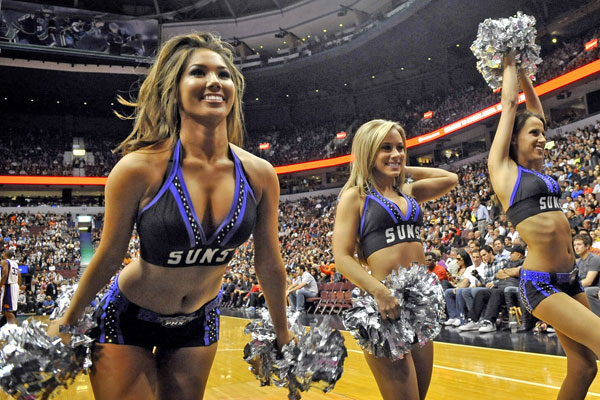 The Warriors put their undefeated streak on the line Friday night as they head to Arizona to take on the Phoenix Suns.

Golden State has set the NBA record for most wins to start a season at 16 and will look to solidify their record even more with another win.

While the Suns are no pushover offensively, they have struggled on defense and will surely have their work cut out for them against Steph Curry and company here.

It seems like its men against boys at times when the Warriors are on the court.

Golden State has made it look easy and made opponents look silly at times as they’ve ripped off 16 straight wins. They did just that against the Los Angeles Lakers inside Oracle Arena last time out.

Golden State pulled away in the third quarter for a 111-77 win over the Lakers. They’ll be chasing the 71-72 Lakers now, who had 33 wins to start the season.

With how many weapons the Warriors have, they have no problem putting points up. Golden State is averaging 114.3 points per game.

The Warriors have also been a solid bet for backers on the season. Through their 16 wins, Golden State is 11-5 ATS. They are also 7-0 SU on the road and 6-1 ATS in those 7 games.

The Suns are going the complete opposite direction as the Warriors here. Phoenix has lost 3 straight games and most recently suffered a 120-114 setback against the Pelicans last time out.

Phoenix has gone when Eric Bledsoe and Brandon Knight go. Unfortunately for them, Eric Bledsoe isn’t at 100%. Bledsoe has been battling knee soreness and it showed in his 5 of 16 shooting performance against the Pelicans.

The Suns will have C Tyson Chandler back though, as he missed last game with an illness.

For Phoenix to also knock off Golden State, the Suns will need to step it up defensively. Phoenix is allowing 103.5 points per game.

Phoenix has lost 3 straight and 11 of 14 to the Warriors.

The Warriors should be able to pick apart the Suns defense in this one. Golden State has too many weapons for the Suns to keep up with.

Curry has another stellar performance as the Warriors grab another double digit win.