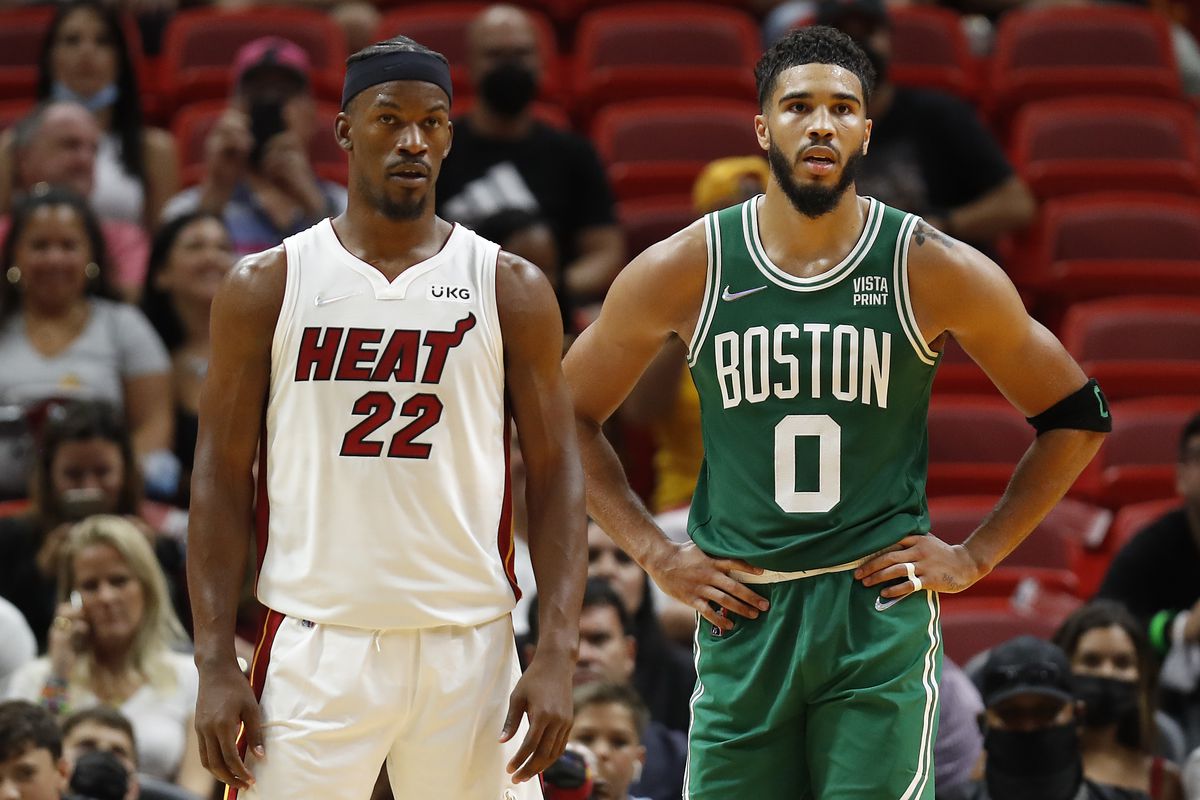 Game one of the Eastern Conference Finals between the second-seeded Boston Celtics and top-seeded Miami Heat tips off on Tuesday, May 17th.

Jimmy Butler and Kyle Lowry missed the second match between the clubs while Robert Williams was out in the final meeting.

Boston holds the all-time advantage having won 78 times of the club’s 129 regular-season meetings. This is the fifth occasion these clubs have met in the postseason with the Heat owning the advantage of winning three of the four prior series.

Although the Celtics aren’t the title favorites their journey to get there will arguably be the most difficult of the four remaining teams.

They faced the Nets in round one who was the title favorite, then dispensed of the defending champion Bucks and will need to beat the East’s top team just to land in the finals.

Boston has adapted in each series with coach Ime Udoka relying on his squad’s defense as they’ve shut down the likes of Kevin Durant/Kyrie Irving and Giannis Antetokounmpo.

The Celtics definitely have a balanced deep team while Jayson Tatum has taken another step in the playoffs stamping his arrival to the very top tier of superstars.

In the semi-finals, he averaged 27.6 points, 6.3 rebounds, 5.4 assists, a steal, and 1.1 blocks while shooting 37.1% from deep on 10 attempts per game and his improved defense has made a palpable impact on the Celt’s success.

The balance of the Celtics is impressive with each of the starting core and several reserves taking turns shining offensively in games. For example in Game 7, it was Grant Williams who led scoring hitting seven 3-pointers on a career-best 27 points.

Marcus Smart (mid-foot sprain) is questionable for Tuesday. Robert Williams III (knee) was activated Sunday but didn’t play and while he’s not on the injury report his presence could be a game-time decision.

While the Celtics have faced a tougher route to the Conference Finals Miami’s path while easier is no less impressive.

The Heat completely shut down Trae Young in round one and beat the 76ers via their own brand of tough defense limiting Joel Embiid (who played in four games), James Harden, and Tyrese Maxey.

This while navigating their own injuries as Jimmy Butler missed a game and Kyle Lowry has missed six of the 11 matches and is out again Tuesday still suffering from a sore hamstring.

Butler has been arguably the most impactful star of the postseason averaging 28.7 points, 7.6 rebounds (2.1 offensive boards), 5.4 assists, and 2.1 steals while shooting 36.4% from deep on 4.4 attempts and frequently tasked with the toughest defensive assignment.

Diving deeper into this matchup the statistics offer evidence the teams are much closer than expected.

Although Boston is cited for defensive dominance it’s actually Miami who possesses a better postseason defensive rating (104.6 versus 105.2). Offensively the teams are closely matched with the Celtics scoring 1.4 more points per game while the Heat allow 4.3 fewer points.

The Celtics have lived on the perimeter shooting 37 percent (Heat – 32.1%)  but it was the Heat who sat atop that column in the regular season. Part of the slippage for Miami is tied to the absence of Lowry and the shooting struggles of Tyler Herro.

In the postseason the Pelcians and 76ers ranked first and second for perimeter defense and right behind them are the Celtics (32.9%) and Heat (33.2%) although Miami faced 5.5 additional attempts per game.

With both sides capable of jacking up a bevy of 3-pointers and utilizing lock-down defense the series may come down to depth and injuries.

The seven-game series versus the Bucks was extremely physical and with just a single day off Marcus Smart and Robert Williams both limp into this match. Conversely, Miami has been off since Thursday using those four days to rest up and heal.

Lowry’s availability will factor large since the Heat’s offense is decidedly better with him pushing pace, adding a skilled playmaker who can shoot from deep while bolstering the defense.

His absence is most obvious during cold shooting spells and at game end when Herro or the inexperienced youngsters have been prone to turn over the ball.

Similarly, if Smart and Williams aren’t 100 percent the toll of a long series could play a factor for Boston, particularly since they’re coming off a physical series.

While the Celtics have excelled at limiting superstars in both prior series the difference with the Heat is their depth allows for numerous scoring options and Miami unlike the Nets and even the Bucks will play defense the full 48 minutes.

The big question in Game 1 is the typical rest versus rust issue. With three extra days off Miami has the edge but Boston has momentum. I’m leaning more to the home court where the Heat has yet to lose this postseason although I expect this to be a long and competitive series.