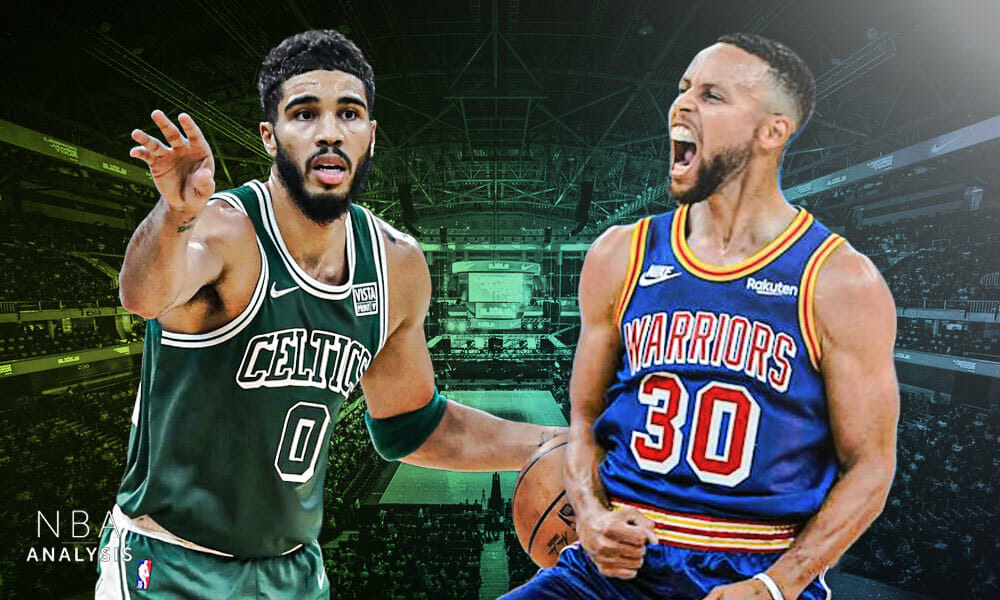 Game 2 of the NBA Finals tips off Sunday, June 5th with the Golden State Warriors playing host to the Boston Celtics and needing a victory to even up the series.

Experience was one of the key disadvantages cited as the Celtics prepared to play their first NBA Finals in over a decade with not one player on the roster having any NBA Finals games on their resumes.

Yet, the arduous path the Celtics took to reach the Finals and in particular the long series versus the Bucks and Heat seemingly provided the edge they needed to come back in the final frame in Game 1 to erase a double-digit deficit and steal the opening match.

It was the Celt’s eighth road win in 10 attempts of the postseason and was fueled by x-factor and role player standout efforts up and down the roster.

Jayson Tatum had an uncharacteristically poor shooting performance (3-15) but delivered a career-high 13 assists taking what the Golden State defenders gave him.

Jaylen Brown was the best Celtic overall providing the spark that initiated the fourth-quarter comeback and finishing with 24 points, seven rebounds, five assists, two steals, and a block.

Derrick White was a spark off the bench scoring 21 points, while Al Horford provided an early birthday gift to himself scoring a team-high 26 points punctuated by a career-best six 3-pointers.

Robert Williams III (knee) is listed as questionable for Sunday.

Stephen Curry began the match on fire scoring 21 points in the opening frame and hitting six 3-pointers. After one in particular Celtics coach, Ime Udoka called time out to reinforce the need to press up on the sniper.

The message was delivered as he scored just 13 more points the rest of the way and the Warriors wasted his standout performance.

While Curry was definitely the player Boston was most concerned about the other notable was how little they cared about Draymond Green in their defensive schemes.

Mid-way through the third quarter, Udoka moved Marcus Smart onto Green who was frequently slacking off him completely. It didn’t help that he shot 2 of 12 missing all four of his 3-pointers and all three free throws.

Gary Payton II (elbow), Andre Iguodala (neck), and Otto Porter Jr. (foot) were earmarked as questionable for Game 1, they all dressed although only the latter two participated.

Kerr stated the medical team felt Payton could benefit from a bit more time to heal and suggested after practice on Saturday he could be called upon for Game 2 although all three are once again listed as questionable.

Although the Celtics took the opening match and did so in a convincing fashion this series is still expected to last six or seven games. For that to be the case it stands to reason the Warriors will win Sunday.

The biggest concerns for Golden State are the fact Tatum won’t likely shoot 3 of 15 again and the extra days off are greatly benefiting Robert Williams, Smart, and Horford who were negatively impacted by having to play every other day since May 7th (12 games).

On the other hand, there are also areas the Warriors know they can improve and pains that were self-inflicted in Game 1.

Although the Celtics’ defense and physicality can be praised it’s also true the Dubs sort of played as if they thought the game was in the bag as the majority of the 3-pointers Boston made in the fourth were wide-open shots.

Coach Steve Kerr contributed to the loss via some questionable substitutions. First, he kept Steph Curry sitting far too long for a guy that was on fire.

But his most egregious substitution was keeping offensively challenged Andre Iguodala and Draymond Green both in the game in the fourth quarter. They hurt spacing and weren’t scoring but also weren’t helping defensively.

Although it’s not a “must-win” for Golden State, it sort of is given they’re hitting the road for the next two matches. Watch to see if Kerr elects to guard Tatum with single coverage in order to better defend the Celtics’ others and/or if he calls upon Payton to guard Brown.

Boston was extremely impressive in Game 1, but I’m still in the Warriors title camp so I’m taking them to even up the series.