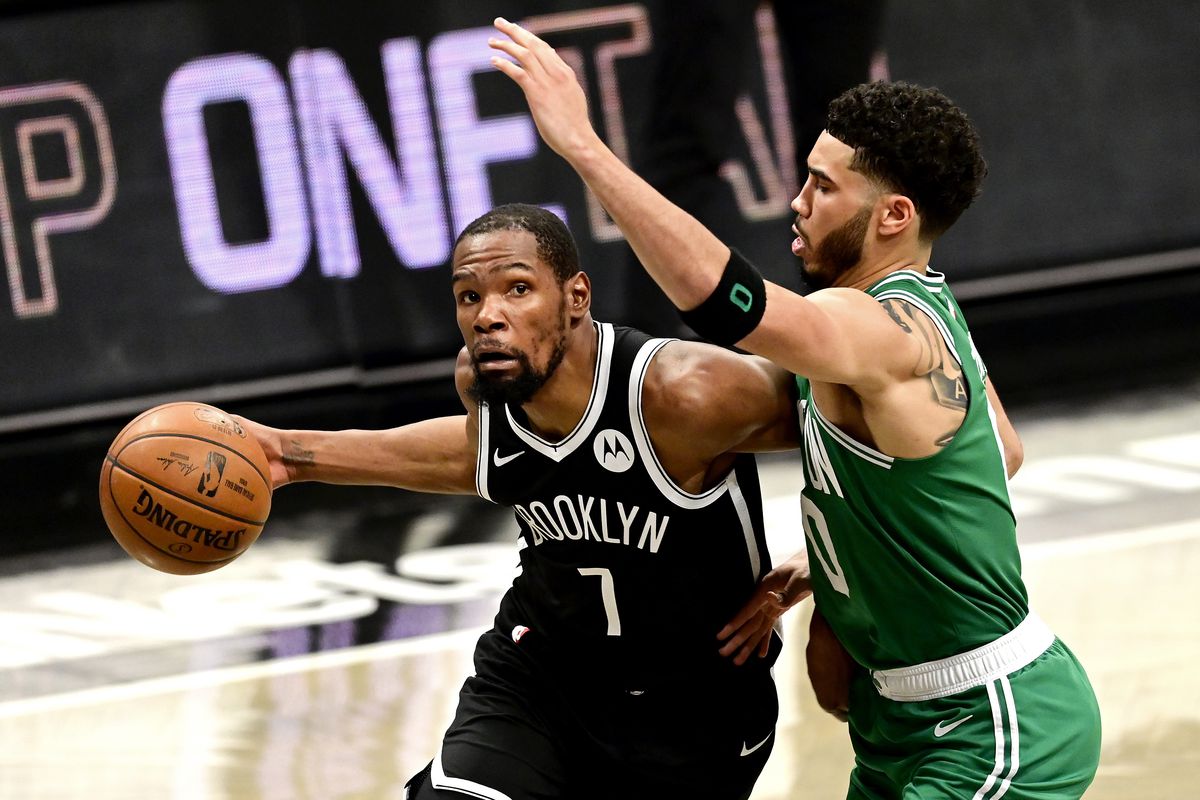 Game three between the Brooklyn Nets and Boston Celtics tips hits the road as the teams play the next two at the Barclays Center. Boston leads the series 2-0 with a 115-114 victory in Game 1, and a come from behind 114-107 victory in Game 2.

This isn’t the typical 2-7 match-up more like two teams you’d expect to see in the Conference Finals and while the games have been close it’s quickly become a series where the Celtics’ defense and depth have held the upper hand versus Nets superstars Kevin Durant and Kyrie Irving.

Although Kevin Durant and Kyrie Irving are the superstars who have reaped the benefits of their stardom, Jayson Tatum and Jaylen Brown are keen to prove they are of equal ilk and deserving of similar accolades.

The Celtics star duo is looking to make a mark in this series and while they’ve yet to have a breakout game in the series they’ve provided the more consistent efforts on both sides of the hardwood.

In Game 2, Brown led the scoring with 22 points adding four rebounds, six assists, and two steals while Tatum delivered a double-double of 19 points and 10 assists plus six rebounds.

Robert Williams III (meniscus) was projected to miss four to six weeks but the Celtics are suggesting he might return mid-series.

The last time the Nets hosted a playoff series in Brooklyn, Kevin Durant delivered a classic performance scoring 48 points but his shoe got the most press.

That Game 7 loss came down to KD’s shoe touching the 3-point line so instead of winning the game was tied and pushed into overtime. The Bucks won ending the Nets season while Milwaukee went on and won the championship.

Those feelings of loss percolated all year and now the superstar and his team arrive trailing 0-2 in another tough defensive series.

Things won’t get any easier for Durant as he’s the focus of Boston’s smothering defense. Celtics head coach Ime Udoka’s game plan is sending bodies at the sniper often double-teaming him and making every shot difficult.

Those defensive schemes have proved successful with KD shooting 9 of 24 in Game 1 and 4 of 17 in Game 2 and turning over the ball six times in each match.

While the Celtics’ defense won’t change the whistle might with the shift to a new venue. Typically, the host gets the benefit calls, and with superstars in the mix, those odds increase.

Blake Griffin (ankle) is questionable for Saturday. Ben Simmons (conditioning) remains out but was cleared for contact and may make his debut mid-series. Joe Harris (ankle) is out for the season.

Although the Celtics struggled early in Game 2 offensively, things clicked in the second half and their 27 assists on 39 made field goals highlighted areas the Nets needed to improve with only 16 assists on their 35 field goals.

Clearly, Brooklyn focuses more on isolation ball – granted with Durant and Irving often leading the plays that’s not much of a stretch but by the same token Nets coach Steve Nash may want to run KD off more screens to free up his star to get more uncontested shots.

Another area the Nets need to improve is their paint defense where they allowed Boston to score 44 points (versus 34).

Undoubtedly, Durant and Irving will be ready the question is whether Seth Curry, Andre Drummond, Goran Dragic, and others will be able to provide the additional scoring and defense Brooklyn needs to get back into this series.

The oddsmakers sure think so, and I’m in agreement the Nets will win, cover and the score will be over.