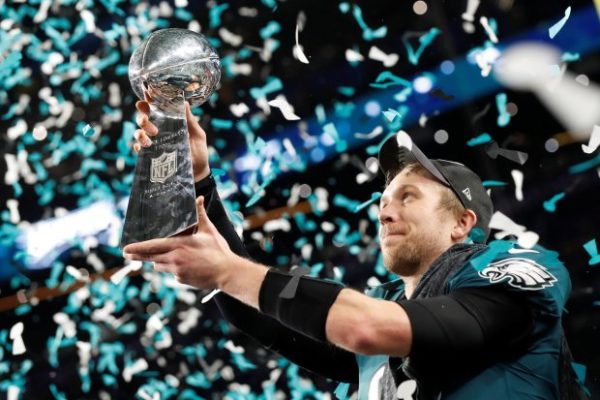 It is already time to get thinking about 2019 Super Bowl futures betting lines and get free analysis for smart Super Bowl 53 Handicapping. The NFL season is over and we’re now into the NFL offseason. With rosters about to start changing and coaches moving from team to team for all 32 teams, the clock is now running on futures bettors looking to take advantage of preseason edges.

It’s never too early to start thinking about next year. The 2017-18 NFL season has come to an end but here is some analysis and insight on who are early good bets to win Super Bowl 53.

2019 Super Bowl Futures:  Teams Who Are Being Disrespected

Philadelphia Eagles (7 to 1): The Eagles just won the Super Bowl with a slew of injuries to starters including Carson Wentz and yet they don’t even open up as the 2019 Favorites. I’m sure they won’t mind wearing the underdog mask again if they have to.

Buffalo Bills (100 to 1): Coming off a playoff appearance, the Bills are in a tie for worst odds with the Cleveland Browns!? Sure – there is a lot of uncertainty in Buffalo starting at the quarterback but sheesh, zero respect.

Jacksonville Jaguars (20 to 1): The Jags nearly earned a trip to the Super Bowl and will be bringing back all key cogs in their defense.

It remains to be seen who will be playing receiver for the Jags but their defense alone should earn them more respect for next season.

2019 Super Bowl Futures: Teams Who Are Being Overvalued

Minnesota Vikings (12 to 1): The Vikings have a decision to make at quarterback between Keenum, Bridgewater, and Bradford. They also lost offensive coordinator Pat Shurmur to the Giants and could have holes to fill in the secondary.

Also, Aaron Rodgers will be back next season making their path to a division title and/or playoff berth much more difficult.

Indianapolis Colts (40 to 1): These odds should be significantly higher. They are competing in a division that sent two teams to the playoffs this season along with the Texans who appeared to be on that path until DeShaun Watson and JJ Watt’s seasons were ended.

Also, the Colts had one of the worst defenses in the league and there is still a lot of uncertainty surrounding Andrew Luck’s health. Plus, their 2018 schedule will feature road games at New England and Philadelphia.

San Francisco 49ers (18 to 1): The Niners have a TON of money to be spent in free agency to build around Jimmy G. And within their division, the Seahawks appear to be headed towards a slight rebuild while the Cardinals have major uncertainty at quarterback and are welcoming in a brand new head coach whose only head coaching experience is at Savannah State.

The 49ers will have to add some weapons and defensive depth in order to be a contender but the framework is there and John Lynch appears to be ready to spend.

Los Angeles Chargers (30 to 1): The Chargers slow start cost them this season but they had one of the most talented rosters in the NFL top to bottom.

They will look to capitalize in their division with quarterback turnover in Kansas City while Denver and Oakland look to re-discover their identities. The Chargers won’t have many impact players hitting free agency and could improve their offensive line with some of their cap space.