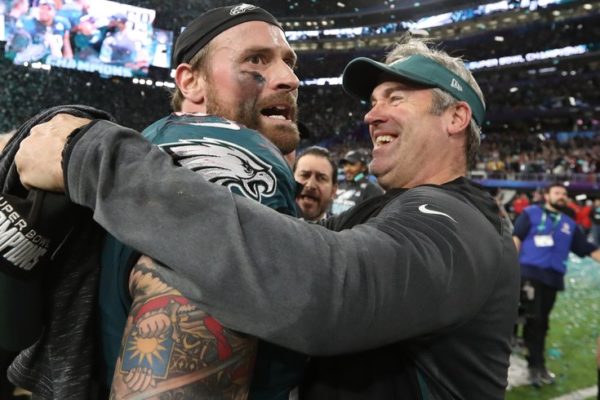 Looking for football betting tips for the 2017 NFL season? Ready to discuss Super Bowl LIII futures? The season is barely in the books, with the Eagles having not even held their victory parade quite yet, but alert football bettors will be seizing the opportunity to get in on next season’s futures bets with numbers already available both in Vegas and offshore.

Here are three favorites, three longshots, and three from the middle of the pack worthy of a closer look when betting on Super Bowl LIII futures odds and lines.

The Patriots enter this offseason with a lot of question marks. The return of guys like Bill Belichick, Tom Brady, and Rob Gronkowski have all been deemed up in the air at one point or another, but it’s difficult to imagine any one member of that trio not being on the field in 2018.

Considering how easy of a path the team had through the AFC this season, it’s clear why they’re the clear favorite to make a return trip to the Super Bowl in 2019.

The Steelers have some work to do this offseason in getting Le’Veon Bell back under contract and ensuring he continues to ply his trade in Pittsburgh. The top-heavy nature of the team’s offense means the absence of a guy like Bell will be felt hard. But assuming they can in fact resign him, they’ll be right back in the mix with the top teams in the AFC.

The Eagles cashed tickets for futures bettors this past year, and they did so without the player who would have won the league’s MVP award had he not gone down with a season-ending injury.
[dfads params=’groups=259&limit=1&return_javascript=1′]

This Eagles roster is loaded with talent, and Doug Pedersen has proven to be a very capable captain of the ship.

The Texans can not sign a free agent and still win the offseason as they’ll return a slew of top-end talent from injury, including quarterback Deshaun Watson and star defensive end J.J. Watt. Couple the return of those players with the wide open nature of the AFC at the moment, and the Texans could make major strides forward in 2018.

The 49ers are the sexy play on the board as onlookers drool over the winning streak the team closed the season out on under Jimmy Garoppolo, and John Lynch certainly had an offseason to remember a year ago, so an injection of talent is likely this offseason. However, the public has sucked all the value out of this line, making it one to avoid.

The Raiders came into this season as Super Bowl contenders and wound up falling flat on their face. The return of Jon Gruden to Oakland should help right the ship and get this team back into the title picture. There’s a lot of talent on the roster, so the transition shouldn’t be a difficult one.

We all know the story – the Broncos are a quarterback away from being in the Super Bowl. Well, John Elway has another offseason now to find that quarterback. After back-to-back seasons of ignoring the position, there must be a fire lit under him now to go out and find that guy.

The Cardinals have a lot of the positions filled that they need to in order to get back into the title picture. The return of David Johnson will be huge for that offense, so it’s just a matter of finding the right quarterback to lead the team where it’s capable of going.

The Redskins swapped out Kirk Cousins for Alex Smith this offseason, and while Smith generally isn’t regarded as a winner, he’s certainly not a downgrade at the position.

There are a lot of pieces in place in Washington, and Smith could be the piece needed to settle things in this always volatile market.

Here are the remaining Super Bowl LIII odds in their entirety:

What do you think of our 2019 Super Bowl LIII odds post? We’ll be providing 4* free NFL predictions on the blog all season long, and check out our Experts for guaranteed premium & free NFL Football picks!