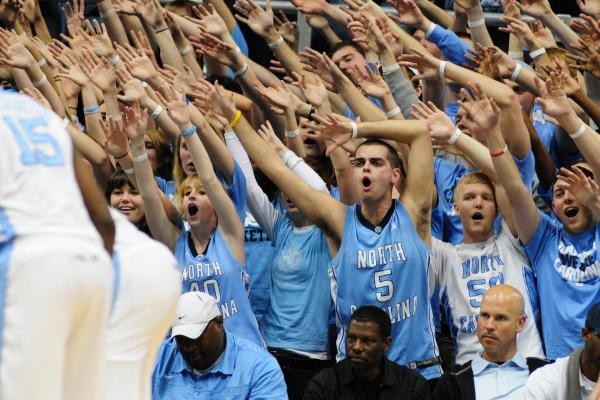 Looking for 2018 NCAA Basketball Futures Odds and some great betting lines to get down on? The regular season is only just getting started in a week but we’re looking for teams that have a chance to cut down the nets in April.

We have to start with the reigning National Champions and the team that has been in the NCAA Finals for two years running now. North Carolina traversed the field last season with physical play up front and senior leadership.

The Heels’ strengths will shift this season because a lot of that bulk from last season is gone. North Carolina has lost three-quarters of its rebounding from a year ago in Kennedy Meeks, Isaiah Hicks, Justin Jackson and Tony Bradley.

In their place, will slide freshman Garrison Brooks, Brandon Huffman and Sterling Manley, three freshman who expect to contribute on the boards. Luke May and Theo Pinson will be back as returning players but neither is a real traditional rebounding big. The combination of those three freshmen is key to North Carolina’s success.

The backcourt is loaded with the return of Joel Berry III to go along with Pinson, Brandon Robinson and Seventh Woods. Cameron Johnson will also come aboard to add some much-needed three-point shooting to a bunch of strong guards who don’t necessarily shoot it as well as the rest of the upper-echelon across the country.

Once again, Duke is the AP preseason no. 1 and the Vegas favorite to win it all in 2018.

The Blue Devils return Grayson Allen, who is coming off a down year but a year that calls for redemption this time around. He has a lot to prove, even after returning from suspension last season to play well.

This is his season and his year to show what he can do as a leader.

But Allen is the only returnee who played more than 10 minutes a game for Duke last season. That isn’t as much of a problem as it sounds when you have four five-star recruits coming in, headlined by Marvin Bagley III.

But despite going off as 4-to-1 in the desert, Duke isn’t favored by a lot of projection models, including ESPN’s BPI which only gives the Blue Devils a 2 percent chance of being the last team standing.

The team that the BPI does like is way down on Vegas’ list: the Wichita State Shockers. Wichita has a 12 percent chance to take home the title, according to BPI, which would makes the 20-1 shot in Vegas better than a 100 percent return on expected value.

The Shockers basically bring everybody back from a team that nearly beat Kentucky to get to the Sweet 16 a year ago. The only reason WSU had to deal with such a matchup was because it was under-seeded in the first place. All eight of the top scorers are back for Gregg Marshall.

Your second favorite in Vegas are the Michigan State Spartans. Miles Bridges returns after posting one of the best freshman seasons in the country without a lot of help last season. He’ll be joined by three of Sparty’s next four highest-scorers from last season.

Any Tom Izzo team is always a good bet but one with experience and motivation to build upon a disappointing season the year before should have a special star next to it.

This Michigan State team has a lot to like about it before it even plays a game in 2017/18.

New season, new team for the semi-pro Kentucky Wildcats. John Calipari does return one player who averaged more than 10 minutes per game last season and that is Wenyen Gabriel.

The 6’9″ forward flashed some impressive scoring and three-point shooting in Kentucky’s first preseason scrimmage in early November. He will be looked at as the leader of this team as a sophomore.

Otherwise, Malik Monk, DeAaron Fox and Bam Adebayo are all in the NBA now. UK will replenish those losses with a fresh batch of five-star recruits: Kevin Knox, PJ Washington, Nick Richards, Jared Vanderbilt, Quade Green and Hamidou Diallo. Count ’em; those are six. And they are all five stars.

It’s hard to figure how Kentucky comes together but just based on Calipari’s history, especially ever since the real one-and-done’ing really got started, UK isn’t a bad bet at 15-2.

The Wildcats from out west provide a little more bang for your buck at +900.

Arizona was recently ranked no. 1 by Sports Illustrated, however, and have an optimal blend of veteran leaders and talented young freshman.

DeAndre Ayton is the face of that freshman class, an athletic and skilled power forward, Ayton is projected to be a top-5 pick in the NBA Draft next year and will come in and immediately help Arizona defensively and on the glass.

Allonzo Trier is entering his junior season after finishing last averaging over 20 ppg in his last 10 games. Dusan Ristic, a skilled 7-footer from Serbia, is a scoring threat inside and outside the paint.

The Wildcats potentially face problems if the NCAA investigation sheds light on faulty recruiting tactics by their program. But for now, we can only assume everybody will be there for Sean Miller’s team.

Rawle Alkins will begin the season on the shelf while recovering from a broken foot but he should be back around the holidays.

For the fifth straight season, Kansas is a top-5 preseason team. The Jayhawks come in at number four this season following an Elite Eight run that ended with a disappointing loss to Oregon.

Kansas is behind Duke, Michigan State and Arizona but it looks like it is the start of tier two, looking up at those top three.

Frank Mason and Josh Jackson are gone but the next wave of talent from last season remains. Devonte Graham is back for his senior season, as is Ukrainian sharpshooter Sviatoslav Mykhailiuk.

Only three freshman are on the way in but they have the talent to play in front of the crowds at Phog Allen right away. Billy Preston is a 6’10” power forward and the complete package. Word from those who have seen him is that it’s just his motor and intangibles that come into question in the short-term.

Missouri has had some good teams in the past but to see the Tigers this high up on the futures board is a little unusual. And the reason why is because the nation’s top recruit, Michael Porter Jr. is on his way to Mizzou.

Porter didn’t initially intend on playing for Missouri. He had committed to play in his home state at the University of Washington before Lorenzo Romar was fired from the Huskies.

UW assistant and the star recruit’s father, Michael Porter, then went on to take a job with Missouri and his son followed. That’s a big-time win for the Tigers, who are immediately national title contenders with one of the best players in the nation.

If you’re looking for more picks like this 2018 NCAA Basketball Futures Odds post we’ll be providing 4* free college basketball predictions on the blog all season long, and check out our Experts for guaranteed premium & free NCAAB Hoops picks!