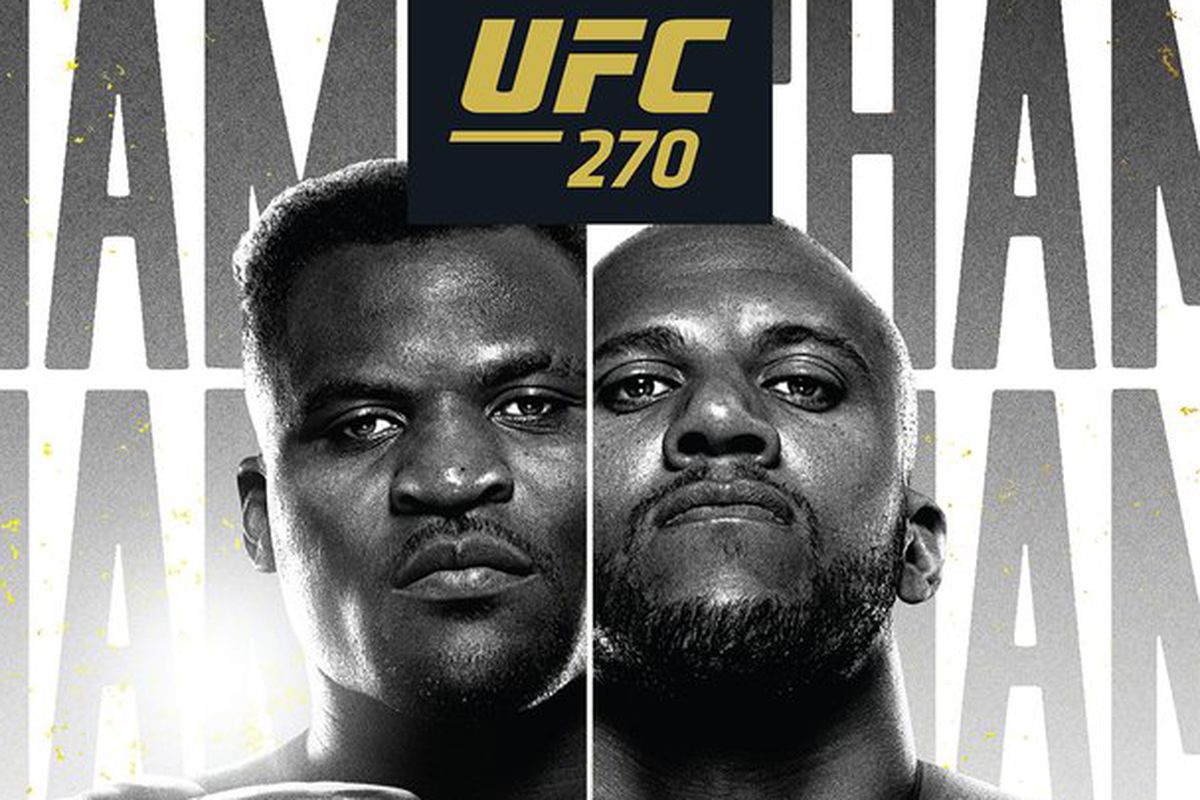 Ready for Ngannou vs Gane? Free UFC 270: Ngannou vs. Gane and betting odds & predictions? Here is a full breakdown of the leadup, what to expect during the fight, and some logical outcomes.

In the main event this Saturday, we’re enlightened to have two of the most dangerous men on the planet, facing off to unify the UFC Heavyweight Championship.

Current champion, Francis Ngannou was dealing with an unfortunate injury, which resulted in Ciryl Gane and Derrick Lewis facing off for the Interim Championship. In a slobber knocker of an event, Gane won the fight by knockout in the third round, capturing the interim heavyweight belt.

Now, former training partners face off with a flurry of trash talk, regarding past sparring sessions, and the results of their fighting behind closed doors.

Surprisingly, the reigning champion Francis has slid from even money, to plus money. Confusing, as he’s on a five fight winning streak, and recently knocked out the heavyweight GOAT, Stipe Miocic.

MMA fans/public bettors are known to have short memories, and recently opponent Ciryl Gane has looked unbeatable in his run to interim champ. Mainly he’s managed to win over fans with his insane foot movement and elite arsenal of strikes.

That being said, he’s only had ten professional fights and doesn’t have the UFC experience Ngannou does, especially during adversity. And for that, we’re taking the more seasoned and devastating fighter, Francis Ngannou.

In an electrifying trilogy, the always lethal Figueiredo is looking to recapture his belt after losing it to Moreno in their last bout. The first time these flyweights graced the octagon, the lights out scrap led to a uncommon draw, which resulted in Figgy keeping his strap.

However, this led to a rematch and the challenger looked unstoppable and shockingly finished the champ on route to becoming the first Mexican born, UFC champion in history. Question is, can Moreno avoid the power of the most devastating striker in flyweight history, once again?

In my opinion, Deiveson looked off in their last bout, and I believe this fight will look more like their first contest. Adding to his diverse arsenal, the ex flyweight champion has also been training his wrestling with Olympic gold medalist, Henry Cejudo.

In addition, he looks more in shape then ever before and poised to regain his title. Don’t forget, experts were calling him the scariest 125er in history just before their last match.

In a dark horse matchup, the always entertaining Michel Pereira welcomes Andre Fialho to the UFC. For people who don’t know Andre, he’s the fighter who knocked out James Vick in Xtreme MMA last year.

Afterwards, Fialho knocked out three other fighters last year alone, earning him a short-notice fight in the Ultimate Fighting Championship. On the flip, Pereira is the notable capoeira fighter who does insane backflips while fighting.

While Michel is highly entertaining, his flashiness has cost him several times before, notably against short-notice Canadian fighter, Tristan Connelly. Unfortunately adding to his detriment, he’s fighting a savage who could ko him in a blink of an eye.

Due to the nature of this fight, in the respect that its short-notice and Fialho is extremely undervalued. Reason being, he’s already proven to have the ability to knockout a UFC fighter and knocked out four fighters last year alone.

In addition to Pereira’s very inconsistent way of fighting, like getting DQ’d against Diego Sanchez and losing a unanimous decision to a debuter, like Fialho. All things considered, give us the underdog, by way of knock out in his first UFC fight.