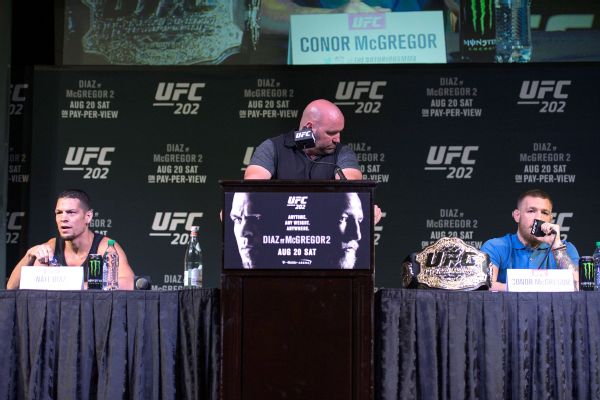 Ready for UFC 202 Diaz vs. McGregor 2 picks and betting odds & predictions? The grudge match finally goes down Saturday night when Conor McGregor and Nate Diaz finally step back in the Octagon to settle a score. Yup – UFC 202 is on tap for this weekend at T-Mobile Arena in Las Vegas. Along with the ultra-intriguing Main Event there are a host of quality bouts on the card.

Let’s take a peek at all of the fights, the odds that accompany them and what should play out on a Saturday night in Vegas.

One of the most anticipated fights in UFC history finally goes down on Saturday night when Conor McGregor tries to avenge a shocking loss over Nate Diaz who will once again enter this fight as the bigger man – months haven’t changed the fact that McGregor is fighting well above his weight class against a man that has taken heavy shots from men a lot bigger than him.

McGregor’s strategy will be a simple one again – he will have to find a way to penetrate Diaz’s good defense and strike his way to victory. The size difference presents a huge problem for McGregor indeed and the fact that Diaz has displayed an iron chin in the past also makes it awfully tough for me to think that the outcome of this fight will be different.

I expect Diaz to be able to weather a storm again – I think Diaz takes McGregor’s best shots again and is able to drag this fight to the mat. Once there McGregor is a fish out of water – period! Simply put this is a horrendous matchup for the smaller, rather one-dimensional McGregor – he heads back to his own weight class with his tail between his legs and with a mouth full of humble pie!

Both men have takes on and beaten an impressive cast of characters – Teixeira has recently defeated Ovince St. Preux, Patrick Cummins and Rashad Evans while “Rumble” Johnson has defeated the likes of Antonio Rogerio Nogueira, Ryan Bader and Alexander Gustafsson.

Both men have 15 KO’s in their career – this fight likely isn’t going the distance. While both have thunder in their hands, one man has the immense edge on the ground – that fighter is Teixeira, although Johnson does have some decent wrestling chops.

I think that’s the difference in a fight that is so close on paper. In a bout with two incredibly powerful strikers, I am going with the fighter with the best overall ground game – funny that!

Teixeira should be able to mix up his striking attack enough to throw Johnson, who has been dealing with some “personal issues” off his game. Tex drags this fight to the mat, sucks the will out of Johnson and beats him by submission.

Two Welterweights try to take a step closer to a Title shot on Saturday when fan-favorite Donald Cerrone takes on Rick Story.

Cerrone enters off a unanimous decision win in June over Patrick Cote while Story seems reborn and arrives on the heels of a win against former Strikeforce champion Tarec Saffiedine.

Story’s will try to stifle Cerrone with his strong grappling and clinch game while Cerrone will have to use his length to keep his opponent on the outside. Although Cerrone has shown the ability to do just that I think Story’s constant pressure is just too much for a fighter that we saw just a few months ago.

It’s true that Cerrone’s rangy strikes and underrated submission game are no joke but my guess is that Cerrone gets no room to operate on Saturday.

Mike Perry will step in on short notice to take on Hyun Gyu Lim in Welterweight action Saturday in a battle of two dangerous foes.

Perry has knocked out every one of his opponents so far – within two rounds while Lim has demonstrated an incredible finishing ability as well – his game is dominating in the clinch and wearing down his opponents before finishing them in violent fashion.

Perry will likely have a difficult time staying above water in this one – to expect a fighter to weather Lim’s exhausting clinch game on two week’s notice is just a bit too much.

If Perry had a full training camp here I may feel a tad differently but Lim, as one of the biggest Welterweights on the planet should be able to wear down his opponent and score a knockout victory along the way.

I don’t love Lim but I do like him against a guy that hasn’t trained for his size and ability. Expect Lim to dictate the pace of a fight and control throughout.

Welterweights kick off the pay-per-view card when Tim Means takes on Sabah Homasi who steps in for Sean Strickland who was injured. Means was last seen knocking out John Howard in the second round in December – a six month drug suspension followed.

Homasi rides a three-fight knockout streak into his UFC debut – his last win came August 5. He hopes that the layoff and the distractions throw Means off.

Means has been in there with some top competition – Matt Brown and Neil Mangy to name a couple – Sabah hasn’t faced anyone near that quality.

I suppose that the newcomer could catch Means and extend his knockout streak to four but I don’t see it happening – Means is just too well rounded and too motivated to climb his way back up to be denied.

Check out our Updated UFC 202 Odds.