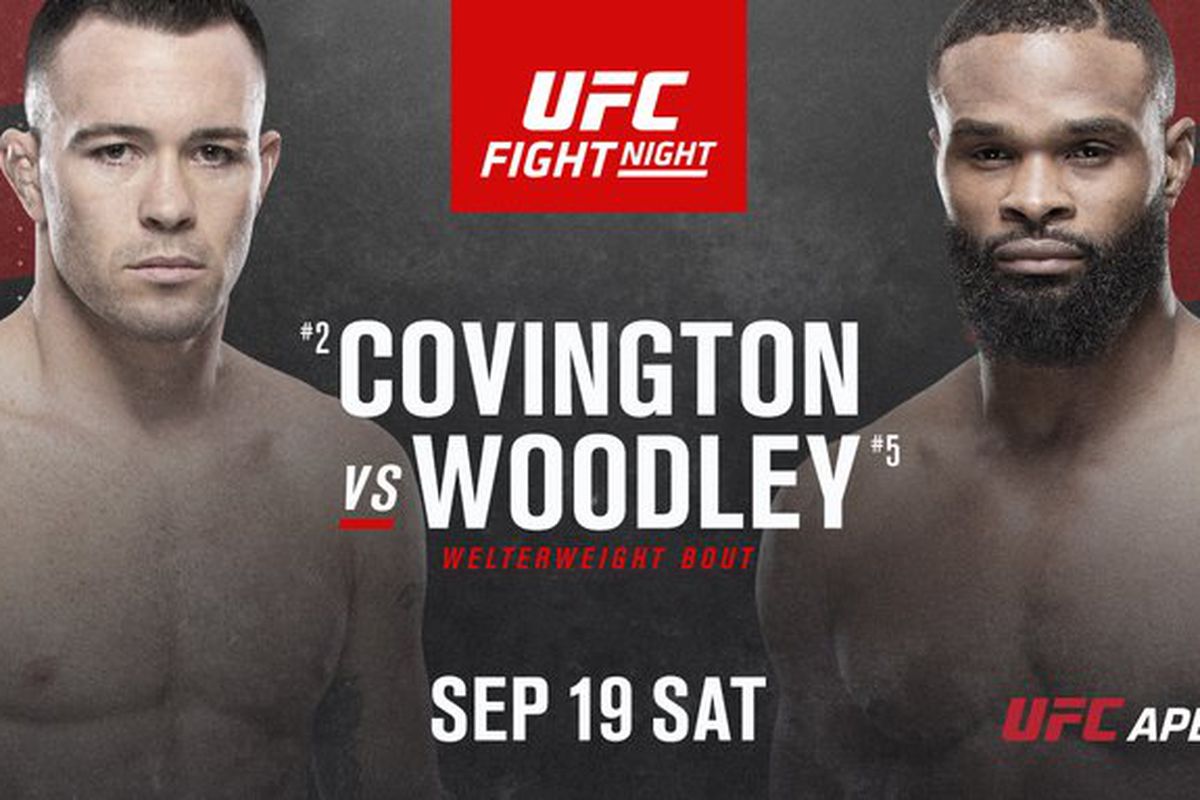 Ready for UFC Fight Night picks and betting odds & predictions? This UFC card will take place on Saturday, September 19th with a headliner grudge match between Colby Covington and Tyron Woodley. Some people have told me I am the hottest handicapper in MMA over the past three weekends. I am not going to disagree, 19-2 is pretty damn good. 3-0 on parlay of the weeks too, but hey, this is no place to brag. Lets make it four weekends in a row. Stay hot, rocket.

Free UFC Fight Night Picks – Let me preface this blog by saying this is easily one of the best Fight Nights in the ESPN era. From top to bottom, this card has some really fun and high stake fights.

Colby Covington is coming off a loss in his first shot at UFC gold, in a fight that he may have won if it went just 150 more seconds more. He looked damn good in that fight, there is nothing to really pick apart besides the lack of wrestling.

This fight may be the most important of Tyron Woodley’s career. As crazy as it sounds, I believe it to be true. If he losses this, that will be his third in a row and in the last two, he looked somewhat foolish.

As for the fight, both guys have all the motivation they need. If Covington was coming off a win, I think I would love Woodley here. But, Covington needs a win nearly as bad as Woodley. Kamaru Usman and Gilbert Burns were able to toy with Woodley, back him along the fence, and dominant in the clinch which sometimes led to the subsequent takedown. He hasn’t let his hands go in his past 10 rounds, which is a cause for concern.

Covington has similar styles to both Usman and Burns and should be able to implement a similar game plan. I thought Covington was the easy pick here, then I put on my suit. I won’t be picking Tyron Woodley because I have lost far too much money on him, so I will lean Covington. Be advised on this one and if you are think this is a trap, like myself, stay far away.

Free UFC Fight Night Picks – In a fight that is too fun to ignore, Cerrone will be making his third walk to the octagon this year in hopes to avoid his 5th consecutive loss.

Niko Price lost earlier this year to Vicente Luque, but won his fight before that by some sick and twisted devastating up-kick.

As for this fight, it is easy to expect a knockout. Both guys enjoy throwing hands and get into punching range quite easily. I do not know if that will be all true here, as I think both fighters will be a tad more cautious than usual.

Anyways, I think Price wins this one. Cerrone easily could, but I will lean Price here.

Man, this card is deep. This fight deserves more press than it is getting, but both fighters are so capable and game, any time, any day. Obviously, Khamzat is a name that UFC fans have gotten to know well this summer. He has won two fights, both by stoppage, and has suffered damage equivalent to a stubbed toe. Maybe less.

As much as Meerschaert is being underestimated, I just don’t see a path to victory here. Lets rock with the hype train, and ride Khamzat to the moon.

I will be honest, I am not a fan of the matchmaking here. Walker was dominated in his last two fights, losing one by first round knockout, and the other he was severely outclassed on the mat.

On the other hand, Spann has won three fights in a row, and has joined ample success since joining the UFC.

I think Walker should be fighting someone that is coming off at least one loss and someone that doesn’t present as big of a problem as Spann. I hope he has taken these 6 months off to polish his game and is ready for this tall task. Feed me Walker, but be advised, big lean here. I wouldn’t bet this.

Free UFC Fight Night Picks – I love Kevin Holland more than I love myself. He embodies everything that made me fall in love with this sport. Oh, and I like this matchup for Holland.

I hate this fight. Staying away here, I wouldn’t even consider this a lean.

Again, way too much value on Costa. Advantage in every physical aspect. I will lean this, but may make it a bet. Stay tuned on Twitter @RizzMMA.

I am big on Wells from the regional scene, but Baeza is a tall task. I will lean this.

Way too much value on Minner. I will make it a lean, but value resides with Minner.