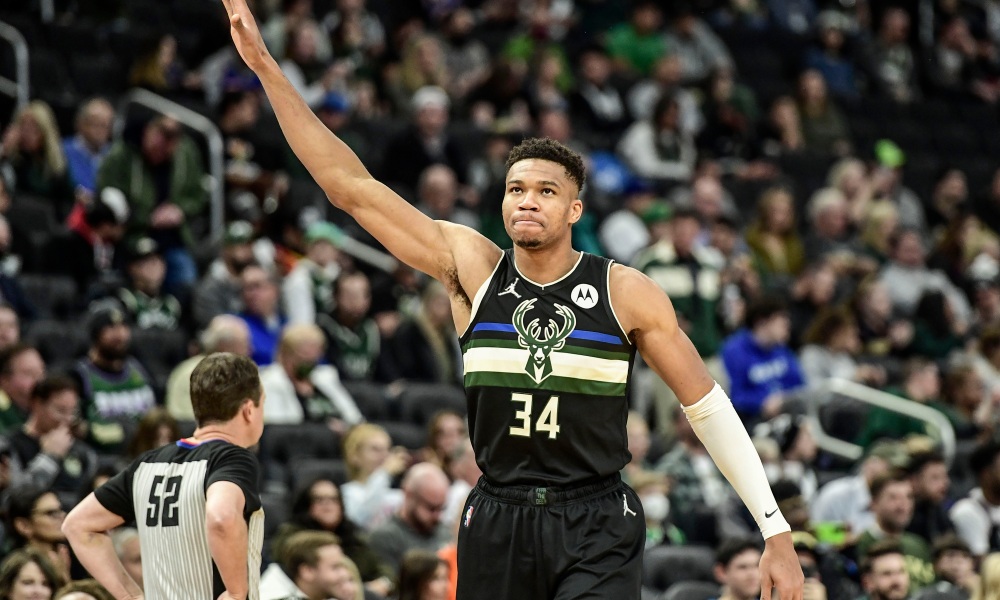 Thursday, February 17th the Philadelphia 76ers play the Milwaukee Bucks for the second of three scheduled matches this season.  In the initial contest on November 9th, the Bucks won 118-109. The final meeting will occur on March 29th in Philly.

Both teams last played on Tuesday with the 76ers getting thrashed 87-135 by the Celtics while the Bucks beat the Pacers 128-119.

Last season the clubs played three times with Milwaukee sweeping the series and holding a current six-game win streak versus Philly. The Bucks hold the all-time record having bested the 76ers in 115 of their 217 matches

The debut of James Harden is expected to occur in Minnesota on February 25th after the All-Star break. He was on the court however with the 76ers during practice this week getting shots up and interacting with his new teammates.

Although Harden spoke kindly about Kyrie Irving citing their friendship he also said the star not being vaccinated did impact the team. The former MVP will also have a spotlight on him because this is the second time in two years he’s forced his way off his existing team.

One comment he made struck me as interesting: “I just knew for a very long time this was a perfect fit, it’s an opportunity of a lifetime.”

Hmm – how long is a long time? The fact he was only in Brooklyn for a year and forced his way onto that team begs the question of how far back he means. It could just be posturing for the press but it does raise questions.

The 76ers will be thrilled to get him on the court especially after the shellacking they took versus the Celtics who are now just 1.5 games back of them.

Joel Embiid will head to Cleveland to play in the All-Star game ironically as part of Team Durant but Harden who was also expected to participate won’t as he plans to return to action after the break.

They would’ve been playing on different sides anyway as KD refused to select his former teammate adding levity to the drafting of teammates. Tyrese Maxey is the other 76ers at Cleveland playing for Team Worthy in the Clorox Rising Stars.

For those who wonder about teams who give their stars a game off to recharge Giannis Antetokounmopo just gave credence to more teams following suit as he sat versus the Blazers (they lost) and returned to blow up the Pacers scoring 50 points with 14 rebounds.

The crazy part was how efficient and easily he got the 50 shooting 17 of 21 and getting to the line 18 times (he hit 14). It reminded those who’ve already tapped Joel Embiid to win MVP this season there is another star equally worthy of the hardware.

Antetokounmpo (Team LeBron) and teammate Khris Middleton (Team Durant) will head to Cleveland to play in the All-Star Game. Giannis and his brothers Thanasis and Alex (Raptors 905) will also participate in the Taco Bell Skills Challenge  all-star skills challenge

Wes Matthews (toe) was upgraded to probable, Grayson Allen (hip) downgraded to doubtful and George Hill (neck) downgraded to out on Thursday. Pat Connaughton (hand) and Brook Lopez (back) are out indefinitely.

Both teams have 23 losses but Milwaukee has two additional wins so a 76ers win would push them ahead of the Bucks. If they lose they have the benefit of knowing Harden wasn’t in the lineup.

The Sixers have lost by 10 or more points on seven occasions with a 5-2 record in the game played immediately afterward.

Ultimately it will be the Embiid vs. Antetokounmpo show and come down to which star gets more support – – without Harden I think the Bucks have the decided advantage but I like Philly to keep it closer than the 6.5 point spread.

If you’re looking for more NBA picks like this Philadelphia 76ers vs. Milwaukee Bucks matchup, we’ll be providing 4* free NBA predictions on the blog during the entire 2021 NBA season, and check out our Experts for guaranteed premium & free NBA picks!