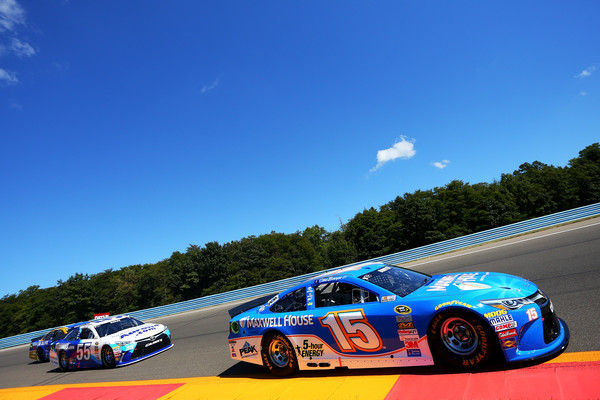 In his first ever Sprint Cup series victory, Chris Buescher took the checkered flag in a rain-shortened race at Pocono last week as a +2500 longshot “field bet”.

Brad Keselowski finished second in that race and, in another solid run by a longshot, Regan Smith rounded out the Top 3.

The following is a look at my top favorite, contender and longshot to win this Sunday afternoon’s race at Watkins Glen based on betting odds provided by TopBet.

Last season’s Sprint Cup Champ Kyle Busch has been listed as a +700 favorite to win his fifth point race event this year in defense of that title.

He has long since been a lock to make the 2016 Chase and with a total of 14 Top 10 finishes this season through the first 21 races on the schedule you have to like the No. 18 Toyota’s chances to win anytime he is behind the wheel.

What really adds some solid value to this week’s odds is a solid racing record on the road course at Watkins Glen especially in recent years.

Including a victory in this event in 2013, he has finished eighth or better in seven of his last eight runs around this venue.

Not too many NASCAR fans or bettors paid all that much attention to long-time veteran Sprint Cup driver Tony Stewart in his final season racing in this series until he won a race on the road course at Sonoma in late June.

Since then, the No. 14 Chevrolet has been in the mix a few times with three Top 5 finishes in this team’s last four point race events.

Stewart has been listed at +1200 odds to sweep NASCAR’s road course series this season and I see a ton of value in that number.

When you combine his current racing form along with the fact that he has won five previous times at Watkins Glen, it adds up to a very strong contender play in my book.

I have been touting the racing talents of Sprint Cup rookie Chase Elliott all season long and despite the fact that his current streak of 15th-place finishes or higher has now reached six, I still see some good value in his +2500 betting odds to win his first point race event this week.

Part of that slide includes a very pedestrian 21st finish on the road course at Sonoma and he has never ran a Sprint Cup race at Watkins Glen.

However, the simple fact that he is in the mix for the Chase at 13th place in the current point standings makes him an interesting play at these long odds.

What do you think of our 2016 NASCAR Cheez-It 355 at The Glen Odds & Predictions? Weigh in below with a comment. We welcome your feedback.

David Schwab is a regular contributor to the Cappers Picks Blog. While not cheering for his beloved Philadelphia Eagles David can be found working on his blog at www.eaglesinc.com. David wants to hear from you so please comment below.