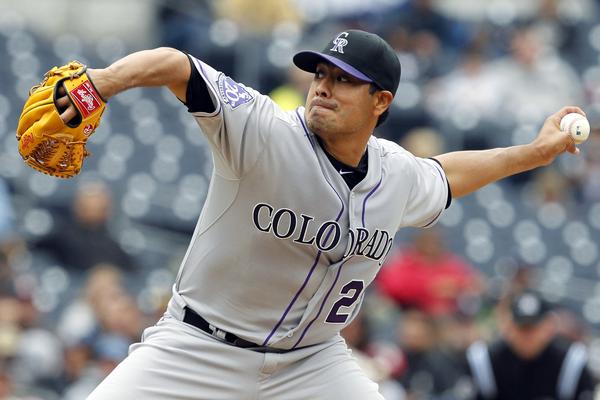 The Cubs close their series out in Colorado Sunday afternoon at Coors Field.

The Cubs have been playing great ball and have won four of their last five games.

The Rockies are on a streak of their own, winning three games in a row.

The Cubs look like the team favored to win it all this season and they’ve proved that with the moves they made at trade deadline and with the way they have performed.

They have scored 25 runs in their last four games and have not scored less than four in nine consecutive games.

They allow a league best 3.4 runs per game while Hammel is even better than that with his 2.75 ERA.

Since his horrendous 10 run game back on July 1st, he’s given up no more than two runs in any of his seven starts.

The Rockies are one of the toughest teams to beat because of their relentless offense but teams can typically rely on the fact that they give up more than they usually get.

On the season they average scoring 5.3 runs per game but give up 5.2 runs per game, but they still give up more than they get because they are four games under .500.

In their last three games, they’ve scored 25 runs and that happens a lot at home.

De La Rosa has had five quality starts in a row but his last outing wasn’t quite as good.

He gave up four over six innings but it was at home, which is the most hitter friendly ballpark in the league.

He doesn’t get a lot of strikeouts but manages to shut teams down when he needs an out.

It is always difficult for any team to come into Colorado and expect to win easily.

The games often because an intense offensive battle and pitchers aren’t used to pitching in Coors field.

Despite the Rockies winning three straight and being at home, it’s impossible to bet against the Cubs.

Plus, Hammel hasn’t allowed a run in over three games and 20 innings of work.

The trend is over right now and both teams are scoring a whole lot but with the line at 11.5, the line just seems too high.

I just don’t think Rockies will get to Hammel, he’s been throwing fire.

This one should stay under.

If you’re looking for more picks like this Chicago Cubs vs. Colorado Rockies matchup we’ll be providing 4* free MLB plays on the blog all season long, and check out our Experts for guaranteed premium & free MLB Baseball picks!