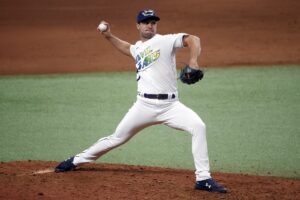 The Red Sox started their road trip well with a win in Tampa Bay on Friday, 4–3.

Michael Wacha earned his first win of the season and pitched well for a third consecutive start. He went five innings and allowed two runs, both on Wander Franco solo home runs.

Boston got two in the first and two in the third against Corey Kluber. Xander Bogaerts had three hits and Rafael Devers hit his third home run of the season.

With Franco up in a big spot in the seventh, Boston’s manager Will Venable, filling in for Alex Cora (virus), went to Hansel Robles earlier than usual.

Boston’s bullpen ace got out of the jam and pitched a 1-2-3 eighth, paving the way for Jake Diekman and Matt Barnes in the ninth.

Diekman got two outs but walked the bases loaded before Barnes slammed the door, getting Franco but only thanks to a terrific play by Trevor Story at second base.

The Rays had more scoring chances late than Boston but could not get the big hit.

Brandon Lowe struck out with the bases loaded and one out in the ninth.

Randy Arozarena and Yandy Diaz ran into outs on the bases. Diaz was also robbed by a leaping Bogaerts on a ball that could have scored two runs for Tampa Bay earlier in the game.

The Rays had so many chances late only because their bullpen did a terrific job.

It threw four perfect innings of relief after Kluber managed to finish five. Three relievers worked and all may be available on Saturday, perhaps with the exception of Phoenix Sanders.

The Rays have not named a starting pitcher for game two.

With Rich Hill on the bereavement list, Boston will turn to Garrett Whitlock to start the first game of the big league career.

He has been even better in the first month of this season than he was in his sensational rookie year of 2021.

Whitlock has given up just four hits and a single earned run on a solo home run in 9.2 innings this season, striking out 11 and walking two.

He’s thrown multiple innings in three of his four appearances out of the bullpen this season, including four in a win against Detroit.

It will be a new environment for Whitlock but there isn’t any reason to love the Rays against him.

Where I do like them is late. Boston’s bullpen has been pretty good but it has some questions of depth.

If it doesn’t have Robles to close it out, nor Whitlock, Tampa may just win this one late, where it couldn’t in the first game.

If you’re looking for more MLB picks like Boston Red Sox vs. Tampa Bay rays matchup, we’ll be providing 4* free MLB plays on the blog all season long, and check out our Experts for guaranteed premium & free MLB Baseball picks!