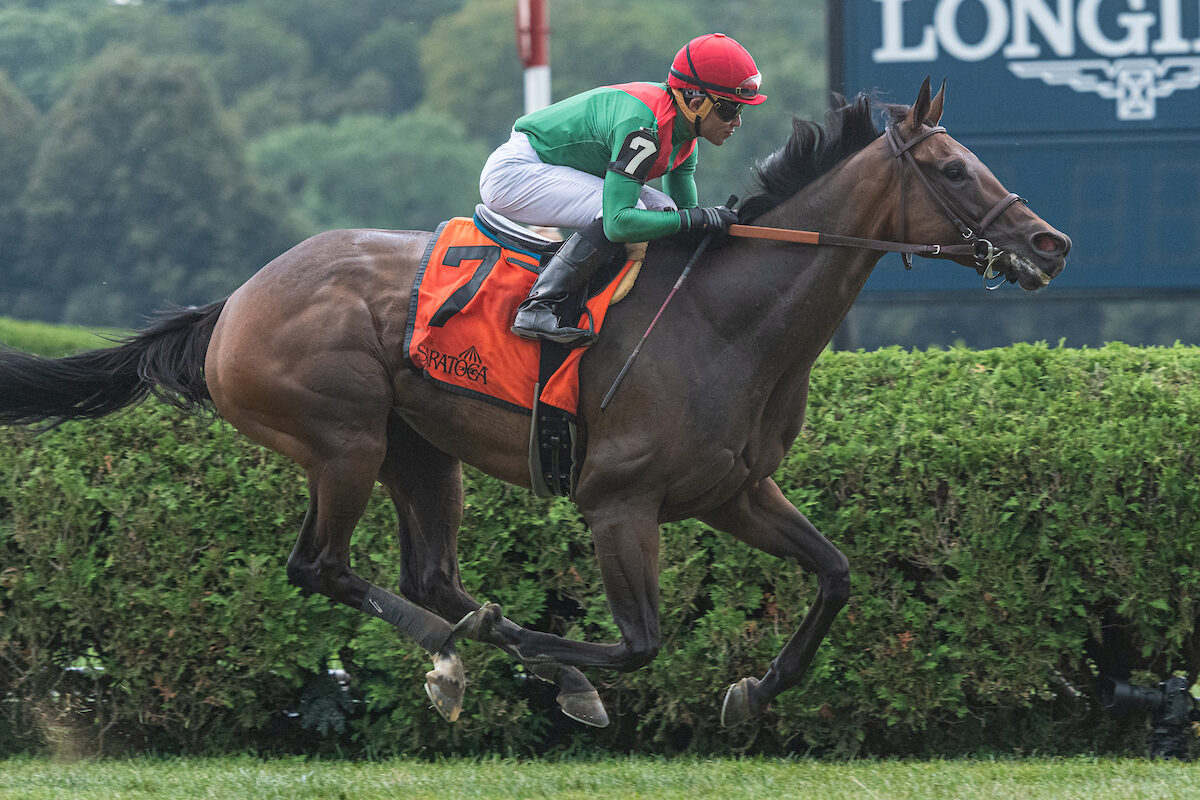 In November 2022 Keeneland Race Course will host the Breeders’ Cup World Championship. But on Friday, Keeneland will first play host to the (G1) Maker’s Mark Mile, a race that has drawn such an excellent field it is being called a BC Mile preview.

Run at a flat mile on the Keeneland Turf, the Maker’s Mark Mile has drawn a full field of 11, nine of which have a previous graded-stakes win, and many that have claimed multiple graded-stakes wins. That’s as strong of a field as you’ll find in North American racing outside of the Breeders’ Cup.

Odds listed here are provided by the Keeneland track handicapper.

One of those with multiple graded-stakes wins, the front-running Smooth Like Straight was last seen in the winner’s circle back in May 2021 when he took the (G1) Shoemaker Mile at Santa Anita. Since then he’s run four times and was second in all four, including the BC Mile last November.

The vast majority of his races – and wins – have come on southern California tracks, and he’ll be making his first lifetime start at Keeneland. It will also be his first start since the Breeders’ Cup, a lay off of some 5 1/2 months.

He’s trained by Michael McCarthy, Umberto Rispoli gets the mount.

Ontario-bred Count Again has done most of his recent running in California, where he’s put together a two-race winning streak. Most recently he captured the (G1) Frank Kilroe Mile, and prior to that he won the (G3) Thunder Road Stakes, both at Santa Anita.

Typically one that comes from way back in the pack, he has also shown some ability to be a little closer to the early pace, which he may have to try to do here. He’ll be making his first start on the Keeneland turf since his maiden win October 2019.

The trainer is Phil D’Amato, red-hot Joel Rosario will be in the saddle.

A winner of exactly half of his 18 lifetime starts, Set Piece is a UK-bred that started his career across the pond but has been racing exclusively in North America since 2020.

As the favourite he was a somewhat disappointing seventh last out in the (G1) Woodbine Mile where he ran into traffic trouble in mid-stretch. Prior to that he had been first or second in five consecutive races. He’s another that will be making his Keeneland debut, and his first start since September.

The trainer is Brad Cox and the rider is Florent Geroux.

Although he was seventh in this race last year, NY-bred Somelikeithotbrown rarely runs a bad race, having finished in the money in his last five starts – with two wins – and hitting the top three in 17 of 23 lifetime.

He closed out 2021 with a wire-to-wire win in the Mohawk Stakes at Belmont Park going a slightly longer 1 1/16 miles and gets a cut back here to what is probably his best distance.

He’s trained by Michael Maker, Jose Ortiz will be in the irons.

No matter who you like in this race, one thing that you can bet on is that it will probably come down to a photo finish at the wire, as often happens when you have several high quality runners in one race on the turf.

I expect Smooth Like Straight and Somelikeithotbrown will battle it out on the lead early, and I hope a hot enough pace will set things up for a fast-closing Count Again to get his nose on the wire first.