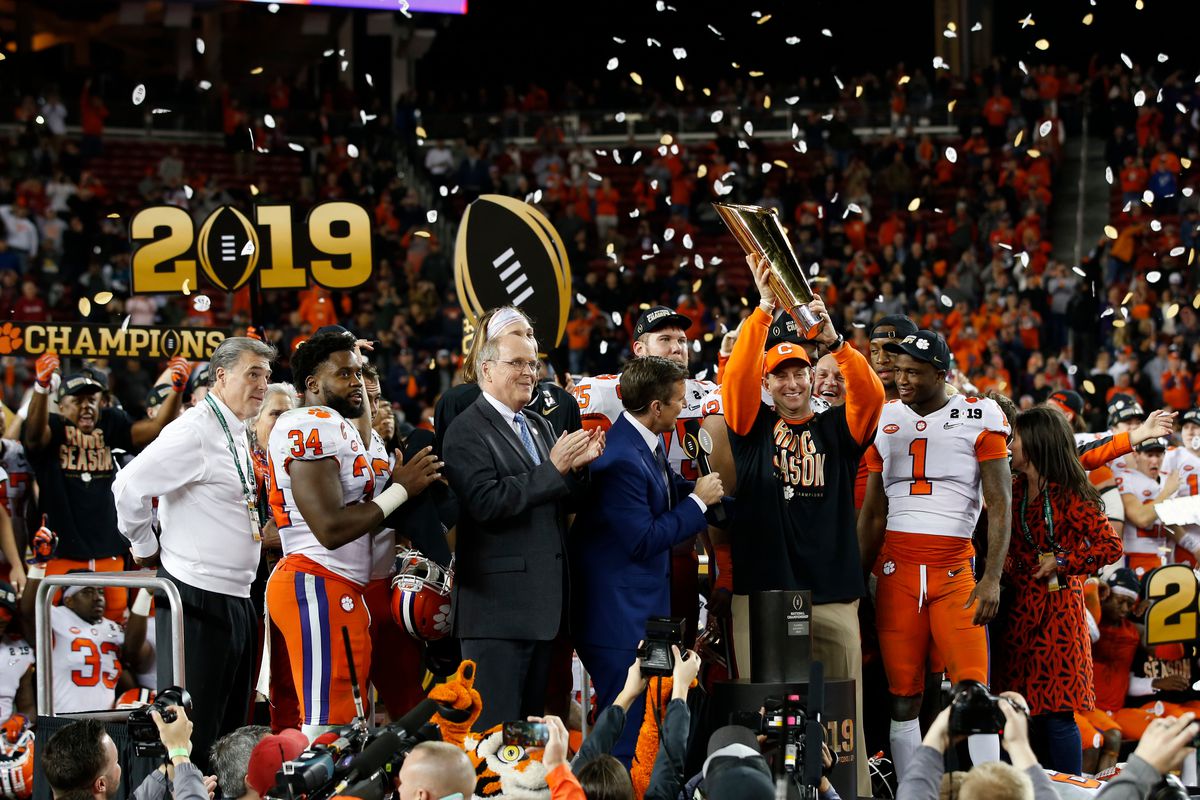 Looking for 2020 College Football Championship Futures Betting Lines & Expert Picks? With the start of bowl season just days away, college football bettors are running out of time as they look to get in their futures bets before the College Football Playoff semifinal games get underway.

Here’s a closer look at the odds for the final four teams in the hunt for a national title, and insight into any value that may exist.

When you think of LSU, you don’t think of great quarterback play. This is a program that fielded both Odell Beckham Jr. and Jarvis Landry at the same time, and no one can remember who their quarterback was at the time.

But Joe Burrows is bucking that trend, putting forth a Heisman Trophy-winning season for the ages. We’ve wondered for a long time how good LSU could really be with an elite quarterback in tow, and Burrows is showing us what that’s like – making the Tigers the clear No. 1 team in the country.

Now the Tigers go into the playoff as arguable the most talented squad in the competition, and their reward is the easiest path, opening outside the big-3 schools with a date against No. 4 Oklahoma in the Peach Bowl.

If LSU doesn’t have enough of an edge on paper already, consider this: The Peach Bowl is being played in Atlanta, which isn’t all that far from Baton Rouge, Louisiana, so expect plenty of Tigers supporters at Mercedes-Benz Stadium. Then, for the College Football Playoff National Championship, the crowd should skew even more heavily in favor of LSU, with the New Orleans Superdome just 70 miles from campus.

And sure enough, the last two national championship seasons for LSU (2003 and 2007) were both played at the Superdome in New Orleans. LSU may have the least upside at its current price, but the Tigers are the clear pick on the futures board given their path to the title.

The defending champion Clemson Tigers opened the season as the No. 1 team in the nation. Following an undefeated campaign, the Tigers entered the College Football Playoff ranked No. 3. That’s all the motivation head coach Dabo Swinney will need to motivate his team entering what should be the more competitive of the two semifinal games.

The defensive line that was the catalyst of last year’s national championship roster left for the draft, and Trevor Lawrence has taken a step back, but there’s still plenty of talent on the Clemson roster, but the Tigers haven’t been tested as much as in past seasons, so it’ll be interesting to see how they handle the step up in class.

It’s been five years since the Buckeyes won the inaugural College Football Playoff, and while that may not be that long ago, it’s an eternity in Columbus. Now the team fields what may be the most talented squad in the history of the program, with Chase Young certainly establishing himself as the best defensive player in the country, and Justin Fields having one of the most efficient seasons by a quarterback in recent memory, compiling 40 touchdowns versus only one interception. And that’s to say nothing of J.K. Dobbins inching closer to 2,000 yards on the ground.

Bettors looking for value and upside on the futures board won’t do any better at this point than Ohio State, though that final in New Orleans would certainly be a daunting matchup.

The Sooners are in the playoff for the third straight season, but are as much an afterthought this season as they’ve ever been in this situation, entering as double-digit underdogs against No. 1 LSU.

Perhaps an other-worldly performance from Heisman Trophy-finalist Jalen Hurts can propel the team to an upset, but they’re the clear-cut No. 4 among the semifinalists.