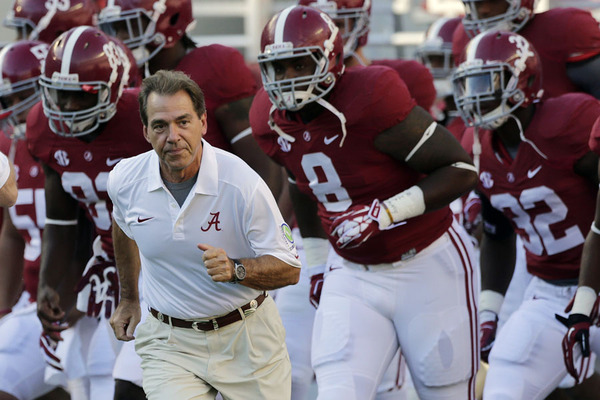 Looking for NCAA Football future odds, specifically 2016 College football win totals? With the CFB season less than a month away, time is running out to place your bets on teams win totals. Win totals can be very valuable to bet at this time, as picking off some winners can be valuable. Let’s break down some of the best 2016 CFB win totals and find out where the value is.

Playing the defending National Champions on the Under in the following season is always a tough task.

However, this Alabama team has a very tough road ahead of them.

Alabama heads into this season with a compliment of QBs who haven’t stepped foot in a game situation, along with some unproven running backs.

Schedule wise, they get zero favors. Alabama will start things off with a neutral site game against a talented USC team. Conference road games include at Tennessee, LSU, and Ole Miss.

The schedule is daunting and certainly won’t be easy by any means. Seeing 3 losses from this team wouldn’t be surprising at all.

The Tennessee schedule is very favorable for 2016. In fact, they’re slated to be underdog in just 1 game, which is at home against the Crimson Tide.

There are a lot of expectations for the Volunteers heading into this season and this team could certainly be a dark horse for the SEC Title and potentially the National Title.

Expected to go 4-0 in non conference play this season, the Volunteers toughest road games take place in back to back weeks against Georgia and Texas A&M.

One win in that span allows them to even lose to Alabama and still likely cash the Over.

Iowa is expected to do big things in the Big 10 this season. With the ability to lose 3 games and still cash their Over, the Hawkeyes win total shows plenty of value to put some money down on.

The Hawkeyes get Miami OH, Iowa State, and North Dakota on their non conference slate.

Surprisingly, it’s North Dakota that will probably be the toughest test for them. Still, Iowa has too talented of a defense and run game to get upset there.

In conference play, they go on the road to Penn State and get Michigan at home. Those two will pose the toughest tests, but if the Hawkeyes are serious about contending, these are games they have to win.

Other than that, home dates with Wisconsin and rival Nebraska headline the schedule, which again, are winnable games that Iowa needs in order to grab a shot at the Big 10 title.

Texas Tech’s run and gun style gives them one of the most exciting teams in the nation.

The Red Raiders are always featured in games that total well above 70, thanks to their quick ability to strike offensively and lack of defensive firepower.

Texas Tech has the ability to pull off upsets, which is why their Over has the value.

The Big 12 is an all scoring league, with games going back and forth which falls right into the Red Raiders favor.

With this a bit of a down year for the conference with Baylor and TCU losing their core offensive stars, the Red Raiders reaching 8 wins and even competing for a spot atop the conference isn’t out of the question by any means.

The Houston Cougars come into this season favorites of the AAC and have the potential to certainly crash the BCS party.

The Cougars return QB Greg Ward Jr. who is one of the best in the business with both his arm and feet.

Looking at their schedule, Houston opens things up with a neutral site game against Oklahoma, which with a win, can set them up for the entire season in terms of their ranking.

Conference wise, at Cincinnati and at Memphis are their toughest, but very winnable. They avoid South Florida, who they will likely meet in the AAC Championship Game.

Houston can do some damage this year, but don’t panic if they drop to Oklahoma in the opener. Following that, they can run the table and cash this Over.

Texas was an absolute mess at times last season.

They failed to move the ball offensively and their defense was torched on the big play.

Things don’t set up well for them either heading into this season. Non-conference games against Notre Dame and California will both likely result in losses.

Conference play won’t get any easier for them. The Big 12 is built on offense, as stated earlier. This Longhorns offense is more of a slower paced one, with no ability at an explosive or big play. They’ll like be bottom feeders in the Big 12, with 4-5 wins the likely outcome here.

What do you think of the 2016 College football win totals odds? Weigh in below!