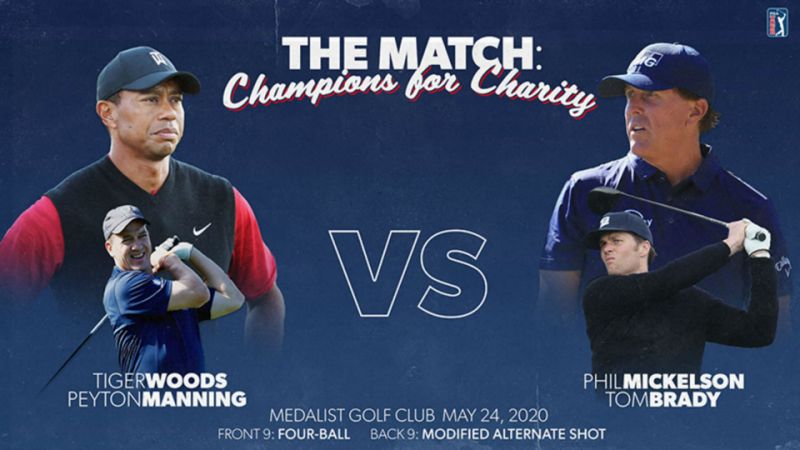 Ready to bet on this week’s Brady & Mickelson vs. Manning & Woods betting odds? CappersPicks weighs in each week with free PGA Tour picks & gambling lines coverage so bookmark our website and check back often. Bettors will have the chance to wager on a real, live golf event this weekend between four of the biggest (and somewhat nostalgic) names in sports.

Phil Mickelson will team up with Tom Brady against Tiger Woods and Peyton Manning in the Match Champions for Charity, this Sunday, May 24, at 2 pm.

The friendly competition will take place at the Medalist Club in Palm Beach, Florida in front of strictly television cameras and no fans. The event has announced its intentions to raise $10 million for Coronavirus recovery.

The event is actually a rematch after Mickelson bested Woods in a winner-take-all showdown for a $9 million purse back in November of 2018.

YOU CAN CLICK HERE TO CHECK OUT OUR TOP 40 SPORTS HANDICAPPERS IN THE WORLD! (All Under 1 Roof)

Mickelson needed four extra holes to earn victory after the two were all square after 18 holes.

Mickelson also went 3–1 on side bets between the two, netting $400,000 for charity by winning all three of his closest to the pin wagers.

Despite his triumph in 2018, Mickelson is an underdog on Sunday. He and Brady are catching a +170 payout, while Woods and Manning are the well-established -210 favorites.

The addition of the quarterbacks adds a wrinkle to the 2020 version of the event, though perhaps not as much of one as some may believe.

The format of the event is to be four-ball match play. All four players will play their own ball on every hole with the best score on each side going into the scorecard.

That means Brady and Manning may be side shows more than anything else. Their strokes will only count if they record a better score than their professional teammate on a particular hole.

Manning has been retired for almost five full years now. I suppose that should, in theory, give Manning an edge over his counterpart on Sunday.

Who has the edge?

The odds are a bit surprising, given how little a role each of the quarterbacks may play in the competition.

There was a time in the middle of the last decade when Woods was an unparalleled force in match play. He won three Accenture Match Play Championships in a span of five years but he has not been the same since.

Mickelson, meanwhile, with his crafty short game, may just hold the advantage over Woods again in this rematch. He has played more match play in recent years and, of course, holds an importantly psychological advantage after winning the head-to-head matchup less than two years ago.

Mickelson’s career will never stack up to Tiger’s but will make a little push for himself by besting Woods for the second time in two years.

Lefty cashes in some nifty side bets while guiding his teammate to victory, this time in the standard 18 holes.

Play Mickelson and Brady as sizable underdogs on Sunday.

Check out our Updating 2020 Golf odds from Bovada.

Free Golf Picks To Your Inbox