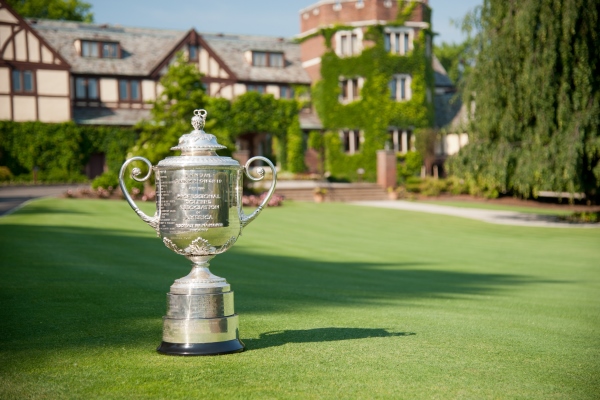 The fourth and final Major of the year – the 2016 PGA Championship comes our way this week from famed Baltusrol Golf Club in Springfield, New Jersey – a 7,428 yard, par 70 track that will challenge every aspect of the pro’s game.

At nearly 7,500 yards this track is long especially considering it is a par 70. Baltusrol has average width fairways, typically tough rough and small, challenging greens for the Pros to contend with this week.

Total driving will be a key stat to look at this week – obviously length is crucial but so is accuracy because of the rough.

Hitting greens is crucial as is placement on the tricky putting surface.

Sleepers have traditionally done well at this event – 12 of the last 20 winner were largely unheralded – names like Rich Beem, Shaun Micheel, David Toms and YE Yang are good examples of that.

So who should be in contention for the Wanamaker Trophy this week? Let’s take a look.

What’s not to like? DJ has been terrific and enters off a quite T2 at the Canadian Open.

He now has an astounding sixth straight top 10 finishes and has finished outside the Top 14 just once in the last five months!

He’s #1 on TOUR in driving distance and T5 in fairways and his putter has obviously become a factor lately. If he puts it all together there is no reason to think he won’t a fixture on the leaderboards here.

Winner of this event in 2012 and 2014 has just one win this year – the Irish Open but he has found the top 12 in eight of his last nine starts, five Top 10’s in his last seven including a T5 last time out at The Open.

It seems inevitable that Rory wins on the biggest stage soon – why not at his favorite Major?

Defending champ will tee it up for the first time at Baltursol in solid, solid form.

Last time out was an uncharacteristic T14 at the Canadian Open and he found the top 10 on seven occasions in his previous 10 starts including an eighth-place finish at the US Open, third-place finish at Firestone and a 22nd at the Open.

Day leads the TOUR in strokes gained: putting and is fourth in adjusted scoring – key stats to look at this week. Of concern is his inconsistent driving accuracy – something that could be an issue this week.

Whew! What to think about last year’s runner-up in this event!

Outside of a T3 at the WGC Bridgestone Invitational Spieth has largely struggled. Spieth is still Spieth however and he does have two wins and six Top-10’s this season.

That said he have been outside the top 30 in three of his last four starts overall – enough to make me looks past his insane putter and sensational scrambling ability.

Gotta take a long look at Stenson this week – he is simply one of/if not the best ball striker on the planet.

His win at Royal Troon could act as the opening of the flood-gates for the talented Swede.

He now has three top fives (two wins and a tie for fourth) in his last five worldwide starts and has the stats to support a good finish again this week – second on the PGA Tour in greens in regulation and seventh in driving accuracy.

And has a good history at this event – two Top 3’s and a 25th in the last three years. Stenson is a weekly threat again like it or not.

The 2005 Champ on this very track looked great at Royal Troon and now has three runner-up finishes and another three top fives in 2016.

Other than that he’s been just too inconsistent for me to trust. Look – Phil is capable of a big week but I am staying away.

Has found the top five in five of his last six worldwide starts including a win the AT&T Byron Nelson, a fifth (US Open), fifth (BMW International Open) and fifth again (Open Championship.

He finished T23 the last time this event was held at Baltursol and his current stats support the notion of a good finish here – 18th in total driving, third in GIR and sixth in adjusted scoring.

Garcia is overdue for a Major win – no better time than right now.

Has been playing some good golf of late – a T9 at Glen Abbey was his sixth top 10 in last eight starts.

He may not be the longest off the tee but he does have a knack of being accurate – something that will definitely come in handy here.

He hasn’t shown up in Majors this year but something tells me he finally does this week.

He has two top 10s in this event including a seventh last year – consistency and an ability to hit fairways has Kuch on my radar this week.

Has traditionally struggled at the PGA Championship but enters the week off a T5 in Canada – he held the 54-hole lead there.

He is T2 on TOUR in par 4 scoring and like Kuchar is seen as a steady low-risk pick to have a good week.

He currently ranks ninth in both strokes gained: tee-to-green and adjusted scoring which should help en route to a good finish this week.

Zach was +5000 at The Open too – no love! He enters having finished inside the top 20 in his last four starts including a T12 at Royal Troon and a T8 at the US Open.

He finished T17 on this track in 2005 – the benefit of having seen this course is a tangible effect.

He has been good lately and seems to be on the verge of a breakthrough.

Watch out for Holmes this week – he was solo third at The Open and T4 at the Masters and recently had a T4 at the Memorial as well.

He is tops on TOUR in driving distance, sixth in total strokes gained and ranks seventh in strokes gained: off-the-tee and fifth in birdies-or-better. His stats are definitely solid making him very good value at +6600.

Has quietly been good this year – five top 10s this season including a T8 at Oakmont.

He loves this event – three top 5s including a win in 2013. He is T23 in total driving on TOUR, T8 in GIR and 16th in adjusted scoring – good stats for Baltursol.

It’s not a sexy pick this week but it is the practical one.

On a track that total driving will be the determining factor Dustin Johnson at +750 has to be the one. He has been on fire and has shown that the added pressure of a major doesn’t really bother him.

He has been T12 or better in eight of his last nine majors. Current stellar form and history on the biggest stages make Dustin an easy pick.

I looked at Charl Schwartzel and Zach Johnson for my sleeper but I’m going with another masher – JB Holmes at +6600.

He finished T4 at the Masters and solo third at The Open – he could be due on the biggest stage.

Golf handicapper DAVE B weighs in each week with his top selections. Including top picks and sleepers!