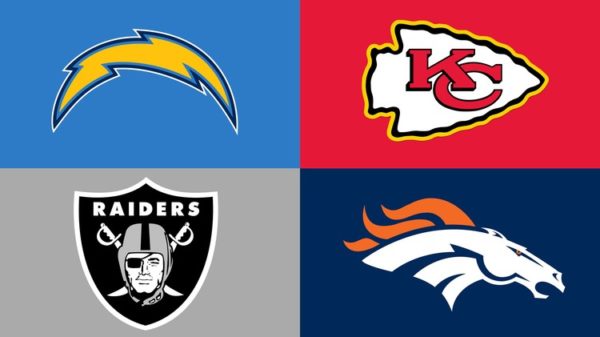 Looking for 2018 AFC West Predictions? With the preseason kicking off, now is the time to lock in your future bets. Divisional odds change every week throughout the season. Now is the chance to really steal some good odds and get yourself some value. Ready to bet on NFL Futures odds namely the AFC West teams’ lines? Click for updated odds on today’s games plus grab a 50% bonus up to $3000 now at MyBookie.ag.

The AFC West produced more disappointments than not last season, the Raiders, Broncos and Chargers all missing the playoffs after all being considered possible contenders before the season began.

The Chiefs didn’t exactly impress all season before sneaking into the playoffs and then losing to the lowly Titans in the Wild Card round. It wouldn’t be surprising to see any of those four teams back in the playoffs in 2018, however.

Going from top to bottom of the Super Bowl odds, the AFC West is the last division to appear in the form of the Los Angeles Chargers, who can fetch you a quick 20x payday with a win.

The Chargers have the most established quarterback in the division in Phillip Rivers, who is overshadowed as an ageless wonder behind Tom Brady. All Rivers does is start every week and put up gaudy numbers. He will miss Hunter Henry this season, who suffered a season-ending injury while practicing this winter.

The home field was pathetic for the Chargers in their first season in LA. It won’t get much better this season in the same stadium, but it can’t be any worse than it was last year. It may help if the Rams regress a bit across town.

The AFC West is also the final division to appear in a list of favorites to win the AFC. The Chargers lead the division in that regard, too, but the Chiefs are the very next team to show up.

In fact, all four teams in the West are the next four to appear. The Chargers, Chiefs, Broncos and Raiders are the fifth, sixth, seventh and eighth favorites in the conference, respectively. The only other division with more than one team ahead of all four in the West is the AFC South, represented by Jacksonville and Houston, two boom or bust teams.

The Chiefs are the reigning champs and run out a new quarterback in 2017 first round pick Patrick Mahomes. He’s got a ton of talent around him in the skill slots on the offensive end.

The defense was brutal last season but only has one direction to go this year. The Chiefs’ success will depend on two things: Mahomes and how much their defense improves.

The Broncos and Raiders have the same odds to win the Super Bowl and the AFC Championship, but Oakland actually has a better shot, according to the oddsmakers, to win the division.

The Broncos come up last in divisional odds at better than 5/1 and I’m not sure I agree with that after the success of Case Keenum in Minnesota last season.

Keenum has a similar sort of team around him in Denver, which has a stalwart defense. The potential differences are on the offensive side of the ball, where Denver’s skill guys are either older or less proven than Minnesota’s of a year ago.

The Broncos are relying on Devontae Booker and a rookie running back to control things on the ground. Then they need a bounce-back season from at least one of Emmanuel Sanders or Demaryius Thomas, who were each next to nil last season.

For the Raiders in 2018 Derek Carr is healthy, for now. Last season was a disaster, but with a full bill of health, a new head coach and a slew of coordinators and assistants, the potential lives once again.

If you’re looking for a potential buy-low fantasy option in the offense, if it does end up working out in Oakland, I like Amari Cooper because of all his physical tools. He was hurt and an overall disaster, too, last season. He had a bad foot, which manifested itself all over his body. He says he’s healthy this season.

It just feels like such a weird year to assess the Raiders, one of the most polarizing teams in the league this season. They have the new coach and are a year away from moving to Las Vegas. And then there’s the fact that the same core won twelve times two years ago after last year’s throw-away season.

The Chargers feel like the best bet to win eight games. I could see the season going really south for just about every other team; and it’s not as if the Chargers are totally safe from disaster striking.

If I’m taking a division winner, I probably take Denver because of the payout and the fact that it has the best defense in the division, at least potentially.

But long-term the Chiefs or the Chargers are my play. I guess Kansas City would be my Super Bowl pick out of the division but I’m not eager to get up to the window to play it. I’m more looking forward to how things play out in this division than trying to win money betting on it.

If you particularly like one team, though, the value is there in a jumbled group.

What do you think about our 2018 AFC West Predictions? Please leave us a comment below telling us how you think they’ll do in the 2018-2019 NFL Season!