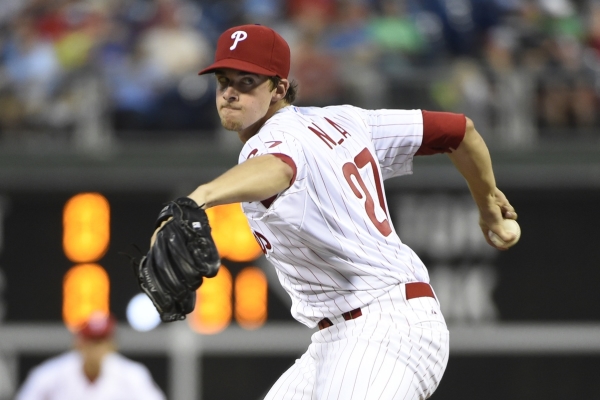 The Brewers and Phillies, two teams who have surpassed expectations so far, will finish their series in the City of Brotherly Love.

The Phils will send ace Aaron Nola to the bump as the Brewers counter with the struggling Wily Peralta.

The Brewers, who have been notorious for keeping the cellar warm in the NL Central for the last few years, are surprisingly just five games under .500 in the beginning of June.

The Brewers were not meant to be competitive this season, but they find themselves just three games back of the St. Louis Cardinals for third in the division.

Milwaukee is getting runners on base with the 8th-best OBP in the majors, but the team is just 19th in runs scored. While the Brew Crew are getting men on base, they’re having a hard time bringing them home.

The pitching has also been a major hindrance, including Sunday’s starter Wily Peralta.

Peralta comes in with a whopping 6.51 ERA and a 1.92 WHIP, both of which rank among the worst in the big leagues.

The Phillies were another team that was supposed to lay down this year, but they find themselves hovering around the .500 mark as the first week of June comes to a close.

Philadelphia has been atrocious on offense, and I’m not too sure how long the team can stand to keep Ryan Howard around. His contract was one of the worst in the history of pro sports, and the Phillies are finding that out the hard way.

It’s been Philadelphia’s pitching that’s led the way as young studs Vincent Velasquez and Aaron Nola continue to show hope that the Phils have a young core to look forward to.

Nola will get the start in this one looking to build upon an already amazing season. Despite a record of just 4-4, Nola has a 2.88 ERA and an unbelievable 0.93 WHIP.

His numbers are surprisingly better on the road, but he still owns a very respectable 1.16 WHIP inside Citizens Bank Park.

While -150 is a lot of juice to lay on a team that is nearly dead-last in every offensive category, Aaron Nola is a special kind of pitcher.

He’s been absolutely dominant this season, and the only reason his record isn’t better is because his team hasn’t given him much run support.

Well, the Phillies will get to face Wily Peralta on Sunday, and he’s been absolutely terrible.

The better pitcher and the better team seems like the reasonable play here, so I’ll side with the Phillies and the highly-talented Aaron Nola.

If you’re looking for more picks like this Milwaukee Brewers vs. Philadelphia Phillies we’ll be providing 4* free MLB plays on the blog all season long, and check out our Experts for guaranteed premium & free MLB Baseball picks!