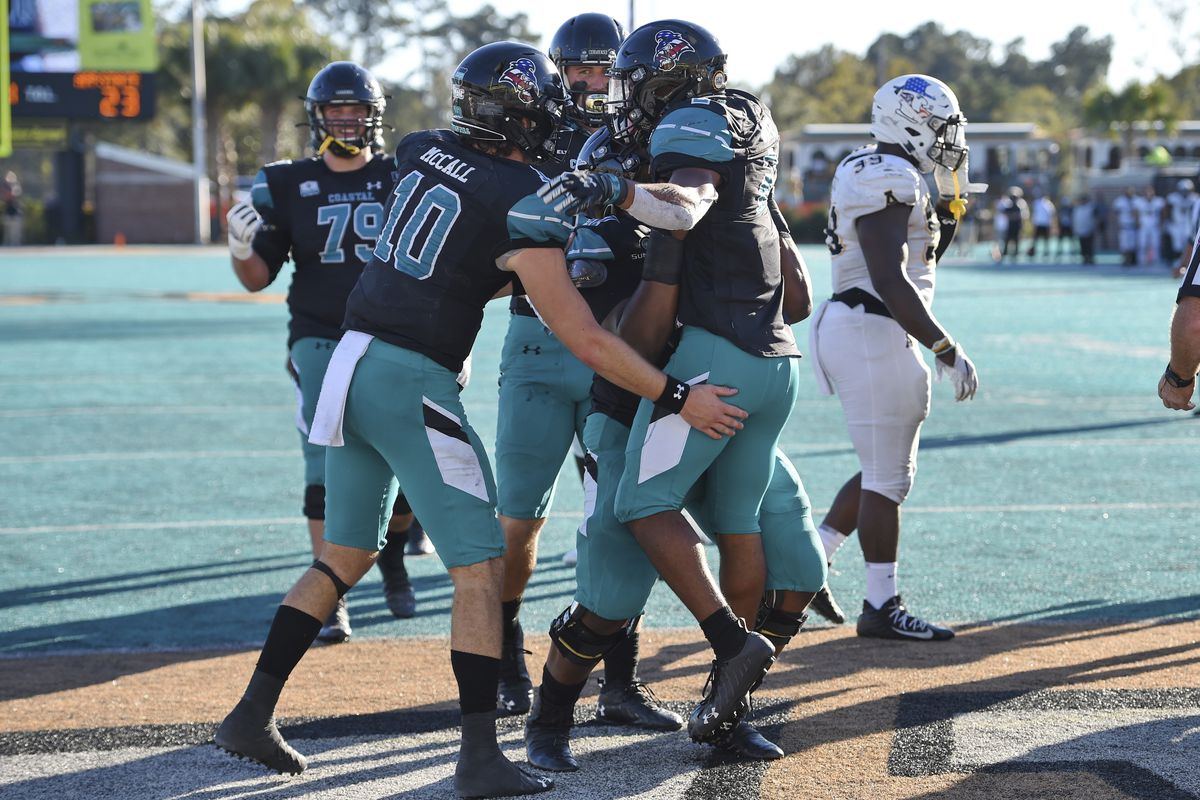 The Chanticleers are favored by 18.5 points in this Sun Belt Conference matchup with a 52 showing on the total.

The Chanticleers had their 6 game win streak to start the season snapped on a strange Tuesday outing against Appalachian State last time on the field. Grayson McCall put up some decent numbers on the day but a last-second field goal gave the Mountaineers a much-needed win to keep the race in the SBC East Division a close one. Only one game separates the two teams atop the division, but the race is between 4 teams that sit 2 – 1 in conference play.

The Troy Trojans are one of those 4 teams at 2 – 1 tied for the division lead in the East making this affair huge for both programs. The line setters are pointing to a clear and easy win for the Chants but if it were that easy we wouldn’t bother playing the game.

Let’s get it on! These two programs have met 4 times since coming together in the Sun Belt Conference. Troy won the first two meetings but has lost the 2 recent affairs by a combined 5 points.

The Trojans were big underdogs expected to lose by 13 points in last year’s final game of the regular season against the Chants. Troy came within a whisker of taking the win, 42 – 38, and now we have a 4-way tie for first place in the division.

Troy, Coastal, App State, and GA State all are locked in at 2 – 1 in Sun Belt play which matters more than either team’s overall record. If Troy pulls this upset they can put themselves at the top of the standings with only 5 regular-season wins. In addition, they have meetings with both App State and GA State left to play so essentially it is in their hands to finish strong and take command of things.

Troy is taking a modest 2-game win streak into this week’s Thursday game on the road taking each affair by a field goal margin. The Trojans took out GA Southern 27 – 24 at home and escaped Texas State with a 31 – 28 victory back on October 16.

The Trojans jumped out to an early 10 – 0 lead but found themselves down 28 – 24 going into the final stanza. The only points in the entire fourth quarter were scored by the Trojan defense as Keyshawn Swanson returned a 33-yard INT to give Troy the eventual narrow victory.

Gunnar Watson had a relatively nice game completing 22 of 29 passes with 182 passing yards and a TD but Kimani Vidal really answered the bell. Vidal ran for 162 yards and scored a pair of TDs and BJ Smith added 56 more of his own rushing yards giving Troy over 200 yards in the ground game in the win.

The Troy defense has been a big reason for the 4 wins out of 7 games as they rank 7th overall allowing only 286 YPG. The 12 turnovers caused also have them in the top-5 in the nation taking the ball away and this team only surrenders 94.6 rushing yards per game ranking them 13th in the land.

18 – 1! Coastal reeled off 18 straight wins in the regular season before their loss to the Mountaineers last time out. The Chanticleers are now 18 – 1 in their last 19 regular-season games dating back to the 2019 campaign which, of course, includes a perfect 11 – 0 in 2020 in between. An overtime loss to Liberty was the only thing that kept this program from being perfect a year ago and it has carried over into 2021.

Head Coach Jamey Chadwell is in year-4 with the program and bowl eligibility is already in the bag with 6 wins and 7 games in the books. (Yes, even with Citadel in the mix)

The loss to Appalachian State after their bye week last Tuesday came as a bit of surprise as they were favored by 5 points but came away with a 30 – 27 loss. The Chants took a 14 – 0 lead into the 2nd quarter and seemingly had everything in control en route to a 7 – 0 start to the season.

Chase Brice outplayed Grayson McCall just enough to lead App State to the game-winning FG as the regulation time came to a close. McCall ended the game 15 for 23 with 291 yards with one score while Brice threw 2 Tds putting up 347 passing yards to help App State end the Chants win streak.

Coastal is putting up 45.7 PPG which ranks them 3rd in all of college football, and the 523 yards per game has this program ranked 7th in the nation in total yards an outing. The defense is right there with them ranking 13th in the nation allowing only 17.2 PPG.

Big lines like this can be tough to read because that is a helluva lot of points to lay if you are a favorite bettor. Even the dog bettors look at this game and wonder if Troy can do enough to keep them in the game long enough to cover.

For me, 52 points are too low on this total and we have seen the strength of schedule thus far for both programs is not exactly overwhelming. I can see 33 – 24 type of game playing out which just gets us over the number. Not to mention that all 4 of their Sun Belt Conference meetings have all gone over the total. Maybe that will start leveling out soon but let’s hope it waits for after they go 5 – 0 to the Over!

If you’re looking for more picks like this Troy Trojans vs. Coastal Carolina Chanticleers matchup we’ll be providing 4* free College football game predictions on the blog all season long, and check out our Experts for guaranteed premium & free CFB Football picks!